It appears we have the first trilogy bout of multi-organization world champion Demetrious Johnson on tap, as he’s slated to face Adriano Moraes for the third time at ONE Fight Night 10. 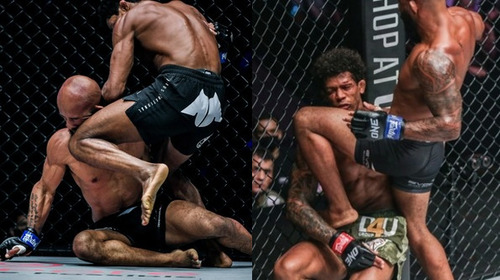 Demetrious Johnson is widely considered one of, if not the greatest mixed martial arts fighter in history.

DJ first appeared in the WEC back in 2010, debuting with a 10-0 record against Brad Pickett. Following a unanimous decision defeat in that fight, Johnson would win his next two-straight en route to joining the UFC roster.

Johnson was then awarded a title shot, where he lost a unanimous decision to Dominick Cruz before dropping down to 125 lbs.

Following a draw in his flyweight debut, Johnson would defeat Ian McCall in the immediate rematch prior to becoming the first ever UFC flyweight champion by defeating Joseph Benavidez.

Once Johnson lost his rematch to Cejudo via split decision in a very, very close encounter, he decided to sign with ONE Championship rather than remain in the UFC and complete his trilogy with Cejudo.

Three-straight victories would soon follow, the third of which saw him capture the ONE flyweight world gran prix championship. This of course awarded him a shot at ONE flyweight champion Adriano Moraes.

Moraes would become the first man to ever finish Johnson in this fight, doing so via KO (knee) midway through round two. Johnson was a downed opponent and didn’t expect a knee to come right up the middle and crack him in his face, but, ONE Championship has the PRIDE ruleset, allowing kicks and knees to downed fighters.

However, an immediate rematch took place, where Johnson KO’d Moraes with a knee in round four to claim the ONE flyweight championship. You can’t write this up, it’s truly incredible how these two fights fight ended.

Then we have Adriano Moraes, a Brazilian stud that was 20-3 going into his rematch with Johnson. He, like Johnson, had never been finished before, and had only lost three decisions throughout his career.

What’s more, all three defeats came via split decision, and the latter two, he avenged in the rematches.

Moraes was the first ever ONE flyweight champion; he’d lost his title twice, as mentioned above, both via split decision, before avenging and recapturing his throne each time.

Moraes defended the title once during his first reign, once during his second reign with an interim title win added in there, and he defended it twice in his third reign prior to losing his rematch to Johnson.

That makes him 8-3 in world title fights with wins over all three men to defeat him.

Now he attempts to become a four-time ONE flyweight champion by winning his trilogy bout with Johnson in May.

It’s incredible that the only time either of these men was ever finished, the loss came to one another. It’s even more incredible that each of their first two fights ended via KO’s stemming from knees.

How does their trilogy bout go down, and who walks away from ONE Fight Night 10 the ONE flyweight champion?