Ricky Simon bested Brian Kelleher on the feet ad on the floor on his way to a unanimous decision victory at UFC 258 inside the UFC Apex in Las Vegas, Nevada on Saturday, Feb. 13.

Simon scored at least one takedown every round and even landed an elbow that split Kelleher open early in round one. He left little doubt, earning a 30-27 nod from all three judges. Simon is currently on a three-fight win streak.

The third time’s the charm for Ricky Simon and Brian Kelleher. After previously being slated to fight twice, the two bantamweights clash at 145 pounds on the main card of UFC 258.

Simon already picked up his first win of the new year with a second-round arm-triangle choke against Gaetano Pirrello at UFC on ESPN 20 on Jan. 13. The 28-year-old is riding a two-fight win streak, including a spilt decision victory over Ray Borg at UFC Fight Night 171 in May of last year.

Kelleher is the winner of three of his last four bouts. He most recently re-entered the win column with a 39-second submission win against Ray Rodriguez at UFC Fight Night 176 this past September.

His win came after dropping a unanimous decision loss to Cody Stamann at UFC 250 this past June. Kelleher looks to add to his collection with five of his six wins coming by finish.

Here is how the bantamweight bout between Ricky Simon and Brian Kelleher went down at UFC 258, including round-by-round scoring. For full results of the event, check them out right here. 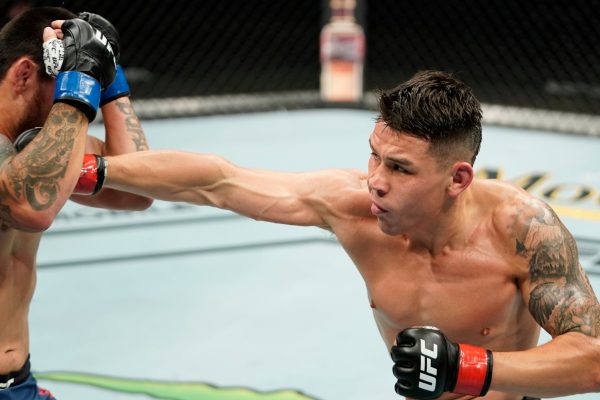 Both men rush to the center. Kelleher looks for a left hook early. Simon drops level and earns a takedown early. Kelleher scrambles, but Simon is glued to his opponent. Kelleher is bleeding from between his eyes. It appears to be from an elbow on the ground. Kelleher gets one hand on the mat and starts to work his way up the cage. Simon scores the takedown. Simon tries to seclude the neck and arm, but Kelleher defends. Kelleher scrambles and gets to his feet. Simon drops low again and puts Kelleher to his back. Simon applies shoulder pressure. Kelleher’s cut is bleeding into his eyes. Kelleher scrambles and gets to his feet again. Simon and Kelleher trade low kicks. Simon lands a right hand to finish the round

MyMMANews.com scores it 10-9 for Simon

MyMMANews.com scores it 20-18 for Simon

Simon putting together combinations. Kelleher lands a jab. Simon ducks under and gets the back of Kelleher on the feet. Kelleher turns and presses Simon against the cage. Simon does the same and puts Kelleher’s back to the cage. Another takedown earned by Simon. Kelleher attempting a kimura, but Simon staying in close, reducing space. Simon defends by attacking Kelleher’s own arm. Kelleher bolts up to his feet. Simon staying glued to Kelleher as he presses his opponent’s back to the fence. Simon drags Kelleher back to the canvas. Kelleher back to his feet. Kelleher lands front kick up the middle again. The final horn sounds with both men on their feet.

MyMMANews.com scores it 30-27 for Simon