United MMA Hawaii, a family-owned Waipahu facility, has closed its doors according to the gym’s Google listing and a report from Combat sports reporter Todd Atkins. The news comes on the heels that Victoria Lee, an 18-year-old professional mixed martial artist, and member of the Lee family that owns and operates United MMA Hawaii, tragically passed away.

Atkins tweeted on Sunday that United MMA had sent out notices to members, stating that “all memberships will be cancelled, and students will no longer be billed moving forward”.

The description on the United MMA’s official Instagram page was also changed to “permanently closed”. 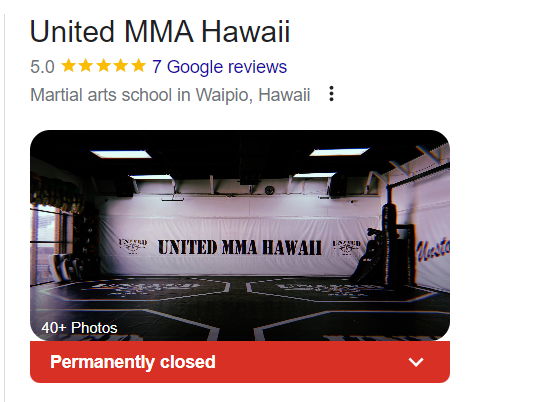 Victoria Lee was coached by her father Ken Lee, as well as her 26-year-old sister Angela Lee, and 24-year-old brother Christian Lee.

Angela Lee and her husband Bruno Pucci, who also competes in ONE, had opened the United BJJ Hawaii gym in Waipio in 2021, where they are both instructors.

Victoria was slated to compete in her fourth pro fight, opposite India’s Zeba Bano, at ONE on Prime Video 6 on January 14 in Bangkok.

A celebration of her life has been scheduled for January 22 before her burial.