Here is something you don’t get to see very often; a comedy roast of a UFC Hall of Famer.

Dan ‘The Beast’ Severn was roasted by fighters and friends October 3 at the MMA Classic Fan Expo in Syracuse, New York.  Much like the roasts on TV’s Comedy Central, the guest of honor is subjected to good-natured jokes at their expense intended to amuse the audience. 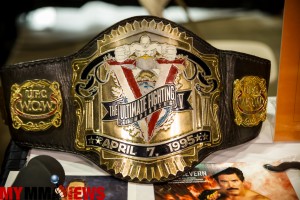 Joining the dais, were legends of the sport Don Frye, Enson Inoue, Paul Varelans, and Brian Ebersole.  The roast master, Jonas Barns started the laughter off with a few cracks on each fighter on the stage before attacking the Hall of Famer.

Frye, a longtime friend of Severn was easily the funniest performer of the night, possibly because he had some liquid courage to back him up, or just because well….. Don Frye is the friggin’ man.

UFC co-founder Art Davie was one of the guests in attendance at the roast, as well as many other mixed martial arts pioneers, all of whom respect Severn as the legend that he is.

Severn recounted the weirdest interactions he ever had with both male and female fans, and also responded to the million dollar question, “Would you come out of retirement to fight Royce Gracie?”

Khamzat Chimaev calls for Stephen Thompson as next opponent

By Donal Long 3 hours ago

By Michael Henken 15 hours ago