Will Martinez is a successful business owner, a black-belt in Brazilian Jiu-Jitsu, an accomplished grappler, and a Bellator veteran with an impressive fight record of 12-3. Despite his lofty accomplishments, he still felt helpless as Hurricane Maria tore through Puerto Rico leaving the island in devastation. 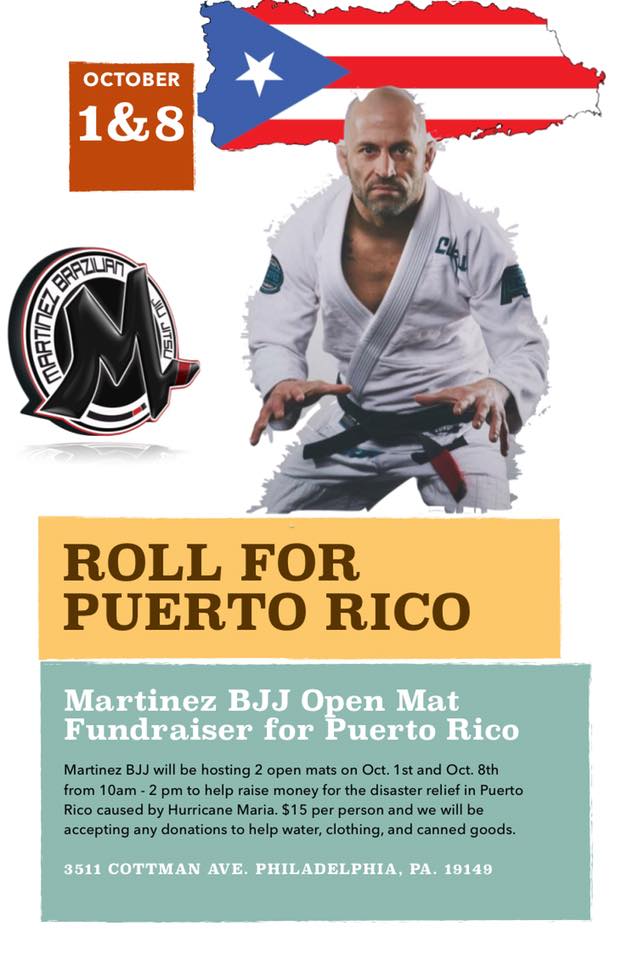 Will’s family is originally from Puerto Rico and he has relatives who are still there. After a couple long days without communication due to the vicious storm, his mother was finally in contact with their loved ones. Martinez is very grateful that the only losses suffered by his family, were of materialistic value.

Will has always been a man of action.  He opened up Martinez BJJ in Northeast Philadelphia and has grown it into one of the best schools in the area.  His team is like his extended family, always hanging out and doing things together. I  compare picking a fight with a Martinez clan member, to taking on the army from the movie 300. They stick together through thick and thin, and usually come out on the winning side.

Will’s mind is always working, trying to come up with ways to help in his own community.  This was the time for him to reach out to his many friends and mentors to go above and beyond and get some aid for the many people in Puerto Rico who are stranded without electricity, water, food, gasoline, and the comforts of their own homes and clothes. Once Will asked, there was no hesitation as Martinez came up with a plan to get things “rolling.”

Visit Martinez BJJ on the web

Mat fees will be 15$ per person and any donations will be accepted including water, clothing and canned goods.  His goal is to have 500+ students attend the open mats in support of the cause.  His guest list is loaded with the icons in the Philadelphia BJJ community. Ricardo Migliarese, Tim Carpenter, Kevin Quigg, Daniel Tavares, Jesus Martinez, Jared Weiner, and Oleg Alf have already committed to attend.  That list is growing by the hour, as it should.

Will also wants everyone to know that you do not have to roll, or partake in BJJ to attend.  All are welcome to come and show their support. Any schools or black-belts interested,  he asks to inbox him so he can help in any way and answer any questions you may have.  Events like this are what pull people together. The MMA community will no doubt do their part.

LISTEN TO WILL MARTINEZ TALK ABOUT ROLL FOR PUERTO RICO BELOW: