Austen Lane claimed the vacant heavyweight title after knocking out Rashaun Jackson in the first round of the Combat Night: Clash of Titans 5 main event on Saturday, July 24.

Lane landed an uppercut as Jackson came forward, putting his opponent to the canvas. Lane swarmed Jackson and forced the referee to step in at 31 seconds into the fight.

The vacant heavyweight strap is on the line at Combat Night: Clash of the Titans 5 on Saturday, July 24.

Order and watch Combat Night:  Clash of the Titans 5 below:

Lane, a former NFL football player is currently on a two-fight win streak. He most recently finished Brad Taylor with a first-round rear-naked choke at Combat Night 20 last March.

Jackson is coming off back-to-back defeats to UFC heavyweights Chris Barnett and Chase Sherman. he is now training out of Fusion Xcel Performance in Ocoee, Florida.

After staring his professional career undefeated at 3-0, Amos dropped his next two. he most recently suffered a second-round knockout against Valentine Woodburn at Combat Night Pro 20 in March.

Brown is on a two-fight losing streak of his own. he suffered  knockout loss to Mike Barnett in his last outing at Empire FC 12 in June. He previously dropped a unanimous decision loss to Dawond Pickney at Peak Fighting 7 this past January.

His last victory is a decision win over Jose Zuniga in November 2020. He is also 0-12 as a professional boxer. 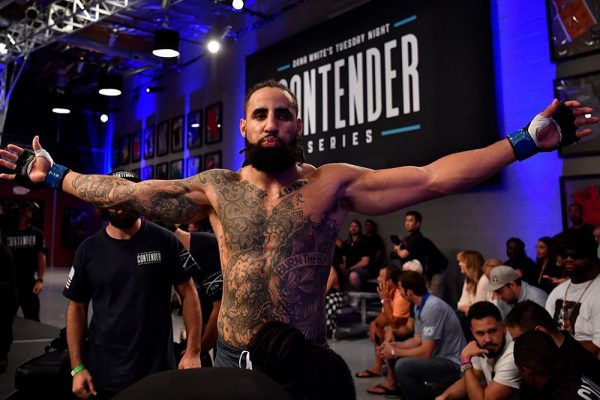 Ginseng Du Jour landed a body kick that put Rory Every down for good to earn the third-round TKO win.

Both men trade on the feet briefly. Every earned a takedown, but Du Jour controlled on top in round 1.

Du Jour and Every clinched, but Du Jour slammed Every to the floor.Every attempted a heel hook, but Du Jour escaped and rained about five elbows from the top position. The second round ended with both men trading punches. Every has a mouse under his left eye.

Du Jour stings Every with a body kick that puts him down. Du Jour swarms Every until the referee steps in.

Juan Rodrgiuez secured a standing guillotine in the second round to defeat Nelton Marsh in his professional debut.

Marsh opened up the second with a flying knee. Rodriguez scored a takedown later in round two, attempting a number of submissions. Marsh able to get in on the single leg. Rodriguez transitions ands sinks in the standing guillotine for the tap.

Rodriguez wins his professional debut, while Marsh falls to 0-2.

David Zelmer stuck to his wrestling to earn a second-round submission win against Joseph Y’Shua in his professional debut.

Zelmer committed to the takedown in round one, but struggled to get Y’Shua down. Zelmer managed to score two takedowns, but Y’Shua never stayed down for long. Zelmer stayed busy, but Y’shua proved to be more efficient.

Zelmer stuck with the takedown attempts and finally earned it later int he second. Y’Shua gave up his back, but survived a rear-naked choke attempt. Zelmer attempted another choke in the final minute and gets a tap.

Zelmer is victorious in professional debut, while Y’Shua drops to 2-2.

Miles Amos made quick work of Clarence Brown with a second-round submission win.

Amos immediately scores a takedown.Amos landed ground and pound and then sank in the rear-naked choke to earn the tap.

Lane caught Jackson coming forward with an uppercut. Lane swarmed with hammer fists until the referee stepped in.

Official decision: Austen Lane def. Rashaun Jackson via knockout at 0:31 in round 1.

Official decision: Ginseng Du Jour def. Rory Every via TKO [body kick and punches] at 0:36 in round 3.

*MyMMANews will be in attendance for the professional portion of the card only, starting at 8 p.m. ET

By Mike Pendleton 21 mins ago