On October 24th, Fight League Atlantic hosted their first grappling event of 2020, FLA: Submission Kumite 1. The event featured sixteen top grapplers from Canada’s Atlantic region, all putting on star-studded performances for a televised audience. Sixteen competitors entered, but only one would emerge victorious. Defeating three top grappling talents, 20-year-old, Drake Farrell cemented his legacy, becoming the FLA Submission Kumite Champion. Fighting out of ZombieProof BJJ, Farrell is a fantastic competitor whose impressive victories in Mixed Martial Arts and Submission Grappling builds a resume that may explain the Kumite tournament results. Now four days removed from the event, the champion has not made any huge public statements of his victory, until now.

The journey, the championship victory, and looking onward, Drake Farrell breaks his silence in this exclusive interview with MYMMANEWS.

For a new champion of such a prestigious event, you haven’t been publicly promoting your recent accomplishment on social media. Why the silence, especially since many would like to know such a great grappling talent?

Drake Farrell: I don’t like to overly promote my accomplishments on social media because I don’t want to come off as bragging, don’t get me wrong, I am proud of all my accomplishments, even the small ones. The way that I see it is that I showed up and did what I did, regardless of the result. I thank everyone that was involved and move onto the next one.

This outlook is important to have, primarily because our participation in combat sports is a never-ending journey, regardless of our triumphs or shortcomings. Being an active participant, how meaningful has your journey been thus far, especially coming up in such a small grappling community in Canada’s Atlantic region?

Drake Farrell: I love every bit of my Jiu-jitsu journey. I know that there will come losses along the way, and I’m ok with that because I know that I learn from every loss and win. The unfortunate thing about the grappling community in the Atlantic region is that you see many of the same competitors. At the same time, when I was younger and still competing in the youth division, I would often also sign up for the adult divisions. When I started placing in both divisions, it gave me the confidence to make that jump to bigger promotions such as IBJJF, NAGA, and Pans outside of Canada. So, I’ve done much traveling for competitions and wasn’t limited to Atlantic Canada. 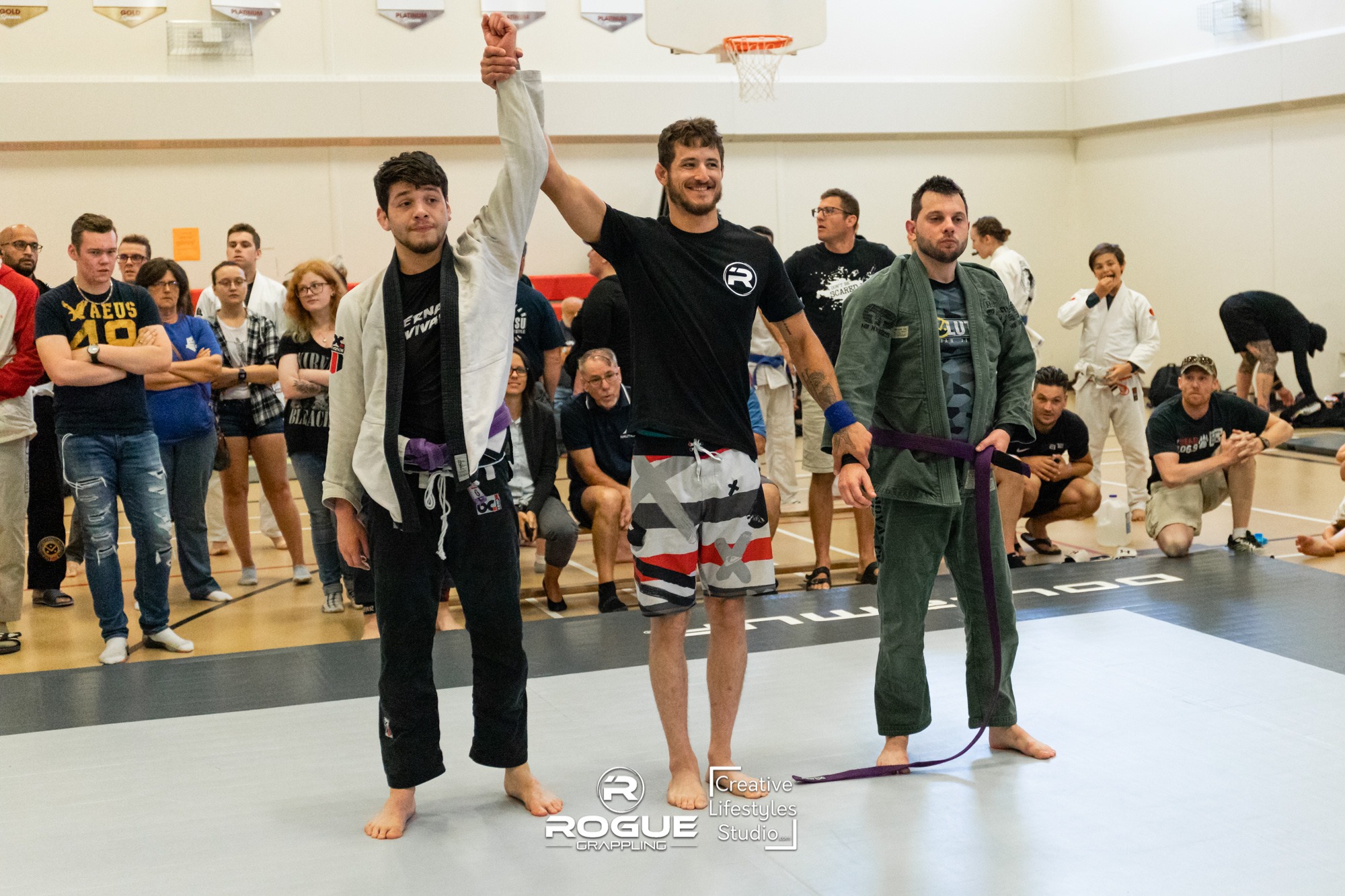 The current COVID health crisis has hurt many, both personal and professional. Being an active participant in combat sports, how did the current health crisis affect you, and how could you adjust or navigate to the current circumstances?

Drake Farrell: Everything had happened so quickly when the health crisis first hit. I was out of school, work, and was unable to train all before the end of March. I first saw it as an opportunity to heal any injuries I have had but soon realized this storm wouldn’t pass as quickly as I thought. I had to maintain my health, so I would go for hikes every day and run a few kilometers every other day.

Fight League Atlantic assembled the top grapplers for their Submission Kumite tournament. Considering your past grappling accomplishments and being absent from that passion of competing because of the health restrictions, what made this offer to compete at this event a special moment for you?

Drake Farrell: When I was first offered the chance to be on this event, I was hesitant to take it at first. I had just moved to a new town, and I didn’t really have anywhere to train. Luckily, Jaret took me in at Pictou Titans to help me prepare. I also had people close to me telling me that I should go for it. If I lost, I would still learn something. The more I thought about competing and past competitions, the more I wanted to get back on the mats in a competitive atmosphere. After training at Pictou and getting back to the gym, I became a lot more confident in my decision to be on the event. I’m really happy I made that decision.

I recently spoke with tournament finalist Joel Jacquard. He talked about the respect amongst the group of competitors and the treatment they received from FLA at the event. How would you describe your experience at the Submission Kumite?

Drake Farrell: All of the guys on the card have a lot of experience in competitions. We all understand what it takes to be part of such an event and the preparation needed, so the respect is always there. I have been dealing with Derek for a long time and have a lot of respect for him. I know that he puts a lot of work into these events, and I can say that it definitely shows when you’re a part of it. The experience was fantastic from start to finish; it was very well run and felt very professional.

Was there a point in any of your matches where you thought the battle wasn’t going to go in your favor?

Drake Farrell: I walk into every competition with great confidence because I know the work I put in. Walking into this one, I was questioning myself because I had tweaked my back the week earlier. So, I had to get a proper warm-up before every match to loosen it up. In my second match against Chris Kelades, I torqued my knee pretty good around the three-minute mark. Luckily, it didn’t have a huge effect on my performance, but I was still hesitant with moving forward with things.

What do you believe was the edge you had over your opponents that led you to become the Kumite champion?

Drake Farrell: I knew I had a gas tank, and I used that to my advantage to drag my opponents into the deeper end of rounds. I tried my best to keep a pace they can’t keep up with while also keeping a steady flow of threatening submissions.

Becoming a champion in any tournament is an astonishing feat of achievement. What does being the FLA: Submission Kumite Champion mean to Drake Farrell?

Drake Farrell: This without a doubt is the most meaningful win I’ve gotten. I know that this absolute bracket contained some of Nova Scotia’s best. I’m glad Derek gave me the opportunity to compete against them and very proud I came out on top. I hope this win will open more doors for me to continue moving forward.

How fast do you think your prized winning Envisage Pre-Workout Coffee will be consumed?

Drake Farrell: I’m going to be honest, I’m not much of a coffee drinker. I do have a lot of them in my family, including my girlfriend, so I’ll be sharing a lot of it with them. I’m sure it’ll be gone in a few weeks, haha.

Considering today’s worldly dilemmas, you have ended 2020 on a high note. What is Drake Farrell looking forward to in 2021?

Drake Farrell: My plan for 2021 is to continue to be an active jiu-jitsu competitor. I would also love to get some more MMA experience in the next year as well. I’m graduating from my welding program, and I’ll also be looking forward to starting a career and settling down. I’m hopeful for more competitions, events, and fights. But with COVID, anything could happen at this point.

If you want to watch the replay of the event click here.