Henry Cejudo is by far the best UFC flyweight right now other than of course, the current reigning champion Demetrious “Mighty Mouse” Johnson, and after suffering a stunning TKO loss when he 1st fought Johnson at UFC 197, he will now have a chance at redemption against him when they meet again at UFC 227 this Saturday night. 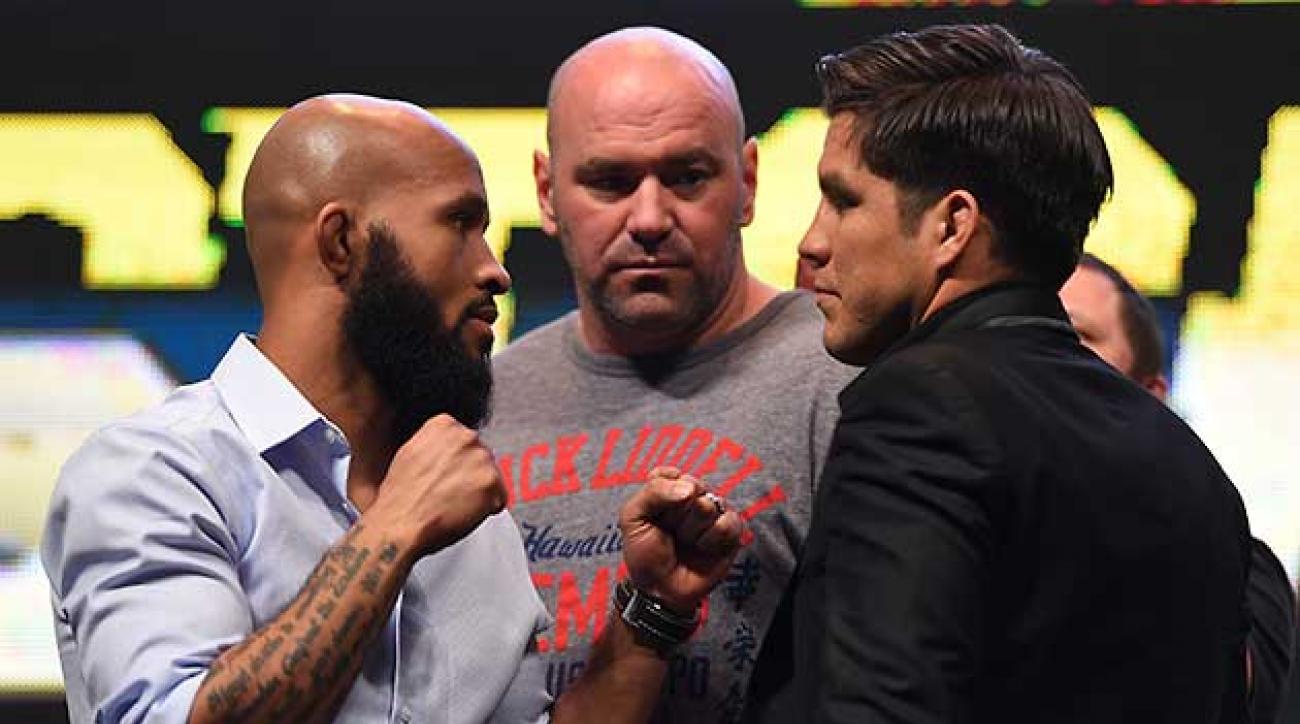 Cejudo’s journey in the UFC has been quite interesting, arriving in the organization as an undefeated prospect with a 10-0 record, and an Olympic gold medal in wrestling to boot, it seemed as if Cejudo would be the next major star of the UFC Flyweight Division.

But that was not so, as once he received his 1st shot at an MMA World Championship against Demetrious Johnson, the inexperience of the young blue chipper was exposed as Mighty Mouse was able to take advantage, and finished him in under 3 mins. due to a barrage of strikes in the clinch.

The defeat was devastating yet humbling for the now 31-year-old, and as a result of that very loss, Cejudo has become a much more well-rounded, evolved fighter ever since.

As a matter of fact, Cejudo has committed the most recent few years to fix those holes in his MMA game, which has lead to him to getting a long-awaited, 2nd opportunity to capture the UFC Flyweight Title from Johnson, an opportunity Cejudo is all too excited about.

“It’s the challenge, man, more than anything,” Cejudo told MMA Fighting. “Because quite frankly, I thought I was going to beat Demetrious Johnson in that first fight. I’m a confident human being and I really did believe I was going to do that, and what happened is he humbled me. It’s like, ‘Hey, man, you’re not ready yet. You’re still green. You’ve got potential, but you’re not ready yet. Not now.’ And to be able to swallow that big pill was humbling to me. Being humbled is a good thing.”

Another noticeable thing about Henry Cejudo that’s happened since the loss to Mighty Mouse 2 years ago is the winning streak he’s been on, or more importantly how he’s been winning.

After getting an insanely close decision to Joe Benavidez in 2016, he went on an absolute tear in 2017, a year in which a lot of people deemed his best ever in his MMA career.

Starting off with an explosive 2nd round TKO of former title contender Wilson Reis, then following that up with a complete one-sided domination of Sergio Pettis at UFC 218.

Cejudo feels that the difference between him from 2016 to 2018 as a fighter is contributed to one simple thing he says, “Smarter”.

“I‘m just a more intelligent human being. Hungrier. The fact that I have a chip on my shoulder. Not necessarily a chip on my shoulder, but losing to Demetrious, the challenge is different, the respect level is different. I acknowledge that he’s the pound-for-pound best fighter in the world, and man, I thrive off of challenges. That’s just how I am. That motivates me to do things better and do things right and putting the right team together [is what I’ve done]. So what’s different about Henry is just being smart, and I had to find the right people. Not good people, but the right people.”

And Cejudo has, in fact, changed his surroundings in a major way since losing to Johnson, a loss that he describes as awakening him to the reality of getting out of your comfort zone.

Over the past 2 years, Cejudo has traveled across the globe in search of fresh training partners, as well as regimens, adopting new skills and various new ideas.

These experiences have been the catalyst for the transformation of the fighter Cejudo is today, compared to the greener, the raw competitor he was in the 1st meeting with Mighty Mouse on that fateful night at UFC 197, and one Johnson dare not overlook heading into this rematch Saturday night in Los Angeles despite the quick victory.

“If he does [underestimate me], then that’s on him, and the results will show. But I don’t think [he will],” Cejudo said. “He’s a smart guy. He’s the pound-for-pound best fighter probably in human history, man. Well-rounded in every area. Anderson Silva, yeah, he was more flamboyant, crazy knockouts, but put him against a good wrestler and Anderson Silva was a different fighter. Demetrious Johnson put him up against a gold medalist, and he stopped him. What I’m saying is, there’s a challenge up in front of me and I’m eating it up, man. I’m excited to challenge myself.

“I know Demetrious switches stances, I know he’s a smart fighter,” Cejudo added. “We know all of that. There’s so much videotape that if he did a thousand things, it wouldn’t surprise me. So we’re expecting everything from him, and some. But this is why I’ve traveled the world. I’ve been to Natal with the Pitbull brothers, spending months at a time out there. Going out to Holland, working with [a decorated] karate world champ. Going and working out with Andy Souwer. I’ve been going out and getting out of my comfort zone, developing those bases, so every stone is turned.”

Demetrious Johnson’s 6-year reign as champion has been awe-inspiring within itself, not to mention breaking multiple records in the process such as most consecutive title defenses with 11, and earning Submission of the Year with his jaw-dropping suplex-armbar combination of Ray Borg, But Cejudo is confident that the division is due for a change.

A change that would breathe new life into it with him as the new UFC Flyweight Champion.

“Long overdue,” Cejudo said. “I feel like I could be that. I feel like I could be that [person who shakes things up]. And Demetrious Johnson has been a great champion, man, I can’t take anything away from that. But the reason why I need to go in and beat this guy is because we need another storyline. This is how legends are born. This is how weight classes will be appreciated, seeing the pound-for-pound guy go down. And eventually someday, it may happen to me, but it’s, a torch is passing.”

“The torch has not passed for so long. The general public, they get bored. There’s no interest because they think or they know Demetrious Johnson will always win. And I’ve always said, even after that loss to Demetrious Johnson, even after he beat me, I said I felt him a little bit. I still believe I can beat him, even after being knocked down the first round. That’s just how I still feel. Even despite the way I went out, I still feel like that.”

Should the young Olympian be the one to take that torch from Johnson Saturday night, he could see an even opportunity come his way.

That opportunity being to fight against the winner of the Dillashaw- Garbandt UFC Bantamweight Title main event.

Originally it’s being planned for Demetrious Johnson to get the winner of that fight, but those plans could very well backfire if Cejudo pulls off the massive upset and wins the flyweight championship, and Cejudo could find himself in a superfight with bantamweight champion.

If you ask him, he surely wouldn’t turn the chance to move up to 135 and challenge for that title.

“Olympic champ, UFC champ. You would call me the champ champ champ,” Cejudo said, laughing. “Absolutely, and this is something that I could call out the UFC and Dana White and everybody in the sports world to let them know, ‘Hey, I just beat the pound-for-pound best fighter in the world. Give me the next guy. Give me the next best thing. Let me go up a weight class.’ I’m all about the challenge. I’m all about it, man. I wouldn’t be in this game if it wasn’t challenging.

“But at the end of the day, I’m not even thinking about going up because I have a big task at hand, and that’s Demetrious Johnson. We’re here to dethrone the mouse.”

Do you think Henry Cejudo will do the impossible and upset Demetrious Johnson this weekend at UFC 227?