Right now thousands of Californias are being affected by wildfires ripping through the state. UFC flyweight contender Henry Cejudo was literally caught sleeping when fire surged through the building he was sleeping in.

The Olympic wrestling standout was forced to jumped from the second floor balcony. Despite early reports that Cejudo broke his ankle, he only suffered burns to the bottom of his feet. Unfortunately he also lost his 2008 Olympic gold medal in the process.

“Hey everybody just want to say thank you for the love and support. Prayers to all the families that lost somebody in the fire. I’m doing fine and my foot isn’t broken but I did burn my foot on the way down after jumping out the window. It’s just a long story but I’ll keep you guys posted when I do a interview. As of now I’m on my way to Natal, Brazil to take care of business at #ufc218” 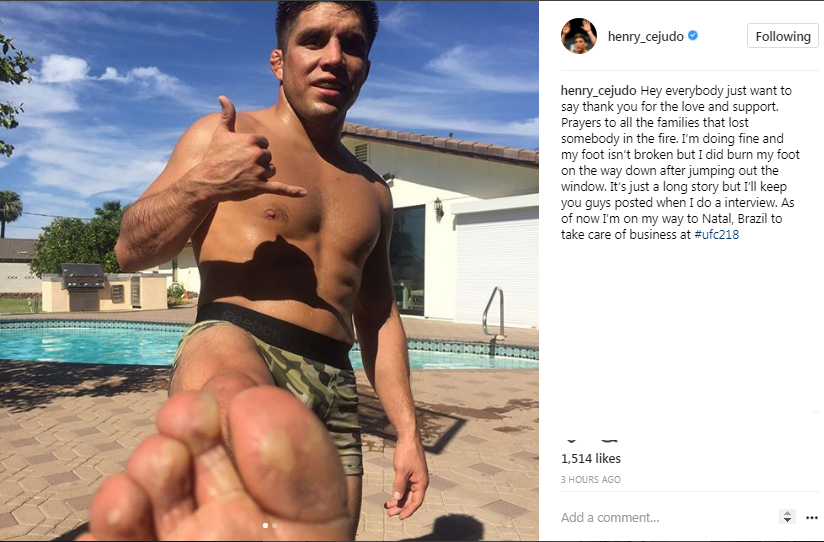 His manager Ali Abdelaziz also confirmed that he was ok.

“He woke up to the fire alarm, but he thought it was just a false alarm so he went back to sleep,” said Abdelaziz to MMAJunkie. “He woke up at 4 a.m. to his room being filled with smoke. He had no choice but to jump on the second floor. He landed on some fire and burned his foot. He’s safe.”

According to a report from NBC News, “Cal Fire Director Ken Pimlott said at least 115,000 acres had burned so far — about 2½ times the size of Washington, D.C. Firefighters from across California and Nevada were called in as reinforcements.”

It is estimated that more than 2,000 homes have been destroyed thus far. Several hundred missing person reports have already been filed.

Cejudo is coming off a second round TKO win over Wilson Reis at UFC 215 in September.  He is scheduled to fight Sergio Pettis on December 2 at UFC 218 in Detroit.