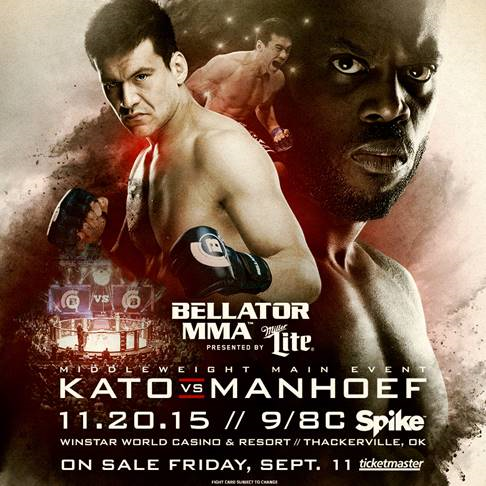 HISAKI KATO SET TO FACE MELVIN MANHOEF IN THE MAIN EVENT OF ‘BELLATOR 146’ AT WINSTAR WORLD CASINO IN THACKERVILLE, OKLAHOMA ON NOVEMBER 20

After his explosive Bellator MMA debut, Hisaki Kato (5-1) will return to action on November 20 at WinStar World Casino and Resort in Thackerville, OK., to main event “Bellator 146” against Melvin Manhoef (29-12-1, 2 NC).

The middleweight contest will serve as the main event of “Bellator 146: Kato vs. Manhoef,” which airs live on Spike at 9 p.m. ET/8 p.m. CT, while preliminary bouts will stream on Spike.com at 6 p.m. CT.

Tickets for “Bellator 146: Kato vs. Manhoef“ go on sale Friday, September 11th at 10 a.m. CT and will be available at the WinStar World Casino and Resort Box Office, as well as Ticketmaster. Ticket prices range from: $75, $55, $45 and doors for the event open at 5:00 p.m. CT local time, with the first contest taking place one hour later.

You can’t make much more of a sudden impact than Kato did against Joe Schilling at “Bellator 139: Kongo vs. Volkov,” knocking out the Glory kickboxing standout via Superman Punch early in the second frame. The victory put Kato on the map in a big way, earning him spots on ESPN’s SportsCenters Top10 countdown and “Knockout of the Year” lists everywhere as well as propelling him to main event status.

Also tied to Schilling is Manhoef, who is returning to the Bellator MMA cage after more than nine-months of inactivity. “No Mercy” has the undeniable ability to knock out any opponent standing in front of him, earning 27 of his 29 professional victories with his unparalleled striking power. The Dutch competitor also has an extensive kickboxing record and has competed for many of the world’s most prominent promotions, which include Strikeforce, K-1 and the infamous Rings in Holland.

By John Hyon Ko 4 hours ago

By Matt Bricker 6 hours ago