With Invicta FC 20 title defense win, Tonya Evinger to have 10 in row

Bill Cosby said it best when he said, “The proof is in the pudding.”

Ok, poor choice of an individual to use as example, however the saying implies that there is a lot of evidence to back up what you are saying moment and you should take my word for it, or you could go through all of the evidence yourself.

Invicta FC bantamweight champion Tonya Evinger belongs in the UFC.  The proof is in the pudding.  The evidence is all there, it is undeniable.

Evinger (18-5) will have 10 consecutive wins if she successfully defends her title against Yana Kunitskaya (9-2) on November 18.

The champion will enter double digits and despite previous angst and animosity between “Triple Threat” and UFC matchmakers, the call cannot be denied much longer. 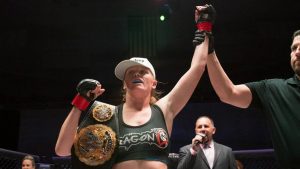 Who else would she have to go through in Invicta to get a UFC shot? The list of qualified opponents is so thin that Evinger is defending her title against a newcomer to the organization.  Don’t get me wrong, there are some talented ladies in Invicta FC, but no names out stick out well enough to keep Evinger behind for a title defense while hindering and prolonging the inevitable.

We caught up with Evinger last month at Revolution Fight Series in Virginia where she had the following to say:

When talk  about Mick Maynard, a fellow Texan, being assigned as new matchmaker for UFC, Evinger replies:

0:30 – “I’m gonna offer him sexual favors for a fight.  Obviously he’s a real cute Australian guy with that accent, you know?  And his wife, she’s real cute to.  Whatever, whatever it takes.”

About negotiations with the UFC:

1:04 – “You know, I don’t know what the issue’s been.  I don’t really care.  I wouldn’t say I wouldn’t ever want to be in the UFC but I don’t want to fight for somebody who doesn’t want me to fight for them or isn’t excited for me to fight for them, so that’s kind of the way I go about it and Invicta treats me good and they’ve always fought me.  I don’t want to go and sit on the sidelines so that’s an issue.  As long as I get to fight I don’t give a shit who it’s for or who it’s against, I just want to fight.”

Chris Daukaus – “I get paid to get in fistfights. I wouldn’t change it for the world.”