‘Iron’ Michael Chandler just picked up the biggest performance of his entire mixed martial arts career this past Saturday at UFC 257, as he finished No. 6 ranked lightweight contender Dan Hooker via TKO midway through round one.

This was a shocker to most, no one’s just ran through Hooker like that before. Look at what Dustin Poirier did to Conor McGregor in the main event; Hooker lasted five rounds against Poirier and took a lot more punishment from him. 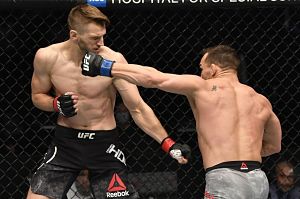 Chandler didn’t throw much of anything for the first two minutes of the bout, he merely controlled the center, looking to find his range. He landed a couple nice crosses to the body, before landing an overhand right, but Hooker remained unfazed, until Chandler caught him with that vicious left hook. Once Chandler found his range, it was a wrap.

This victory improved Chandler’s record to 22-5, and he’s now on a three-fight win streak, all three victories coming via first-round knockout.

Chandler of course started out his career with Bellator, after going 2-0 in Strikeforce, and won the Bellator lightweight championship three different times, and has a total of three title defenses.

He’s had a slight issue with consistency however, but there could be a reason for that. Chandler went from 12-0 to 12-3, the first two defeats were both five round split decisions that could’ve easily went his way. 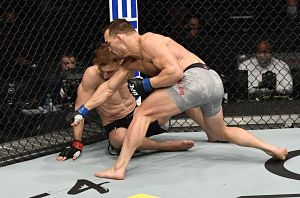 Since then, the other two defeats, one was via injury, which he avenged, and one was to Bellator’s featherweight champion, which some believe was an early stoppage. Chandler could easily be 24-3 or 23-4, rather than 22-5.

Now that he’s finally a UFC fighter, and now that he finally has a victory inside the octagon, is he the No. 1 contender after this stellar performance?

Dana White stated that he’d like for Chandler and No. 1 ranked Dustin Poirier to fight for the vacant title, while Poirier doesn’t seem too keen on the idea. He doesn’t want to face someone that’s brand new to the organization, considering he himself has been a part of the UFC for a decade.

If not that fight, Chandler could also face No. 2 ranked Justin Gaethje, who’s coming off a defeat to Khabib Nurmagomedov. This fight would be absolute fireworks.

The level changes of Chandler, as well as his dangerous striking while switching stances; mix that with Gaethje’s takedown defense and kickboxing, that makes for a very fun fight.

Lastly, is a bout against No. 3 ranked Charles Oliveira, who’s on an eight-fight win streak, having just defeating longtime top three contender Tony Ferguson. Oliveira is dangerous wherever the fight takes place, as is Chandler, but in completely different ways.

Whatever ends up being next for Chandler, it’s a sure thing we’ll all be tuning in!

By Donal Long 25 mins ago

By Joe McDonagh 15 hours ago