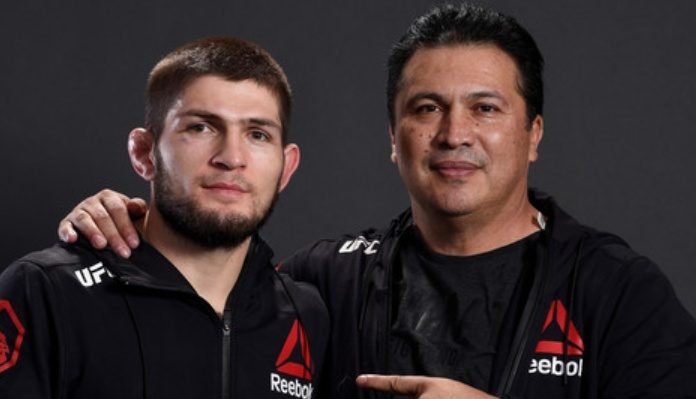 We are exactly a month and a half away from what many in the MMA world are calling the biggest lightweight title bout in UFC history when Khabib Nurmagomedov defends his UFC lightweight title against Conor McGregor.

For the most part so far, we have been hearing from both McGregor’s coaches and teammates on how ready and motivated he is for this epic championship affair on October 6 in Las Vegas.

But now we get to hear from the champion, Nurmagomedov’s side, as his head coach Javier Mendez recently appeared on the Eurobash podcast to give his thoughts about McGregor, and how he’s preparing his fighter and his decorated striking skills in particular.

To Mendez, he feels Conor has the best striking arsenal in the UFC, and sees him as a complete fighter, heading into the bout with his man Khabib at UFC 229.

“To me [Conor McGregor] is the best standup guy in the whole UFC, in my opinion,” Mendez said.

“He’s a master, in my opinion, on the fighting arts and he’s also got a ground game — he’s good everywhere. I’m not sleeping on how great he is. I’m prepared for everything but he is a great fighter.”

Mendez agrees with the notion from UFC fans that deem McGregor as the better striker and  Nurmagomedov the better grappler.

With minimal time to prep Khabib for McGregor’s striking game, Mendez believes the winner of the bout will be the one will be able to lure the other into fighting their fight.

“There’s no amount of time that we have that’s going to help us to try and get him to stand up, there’s no way possible. So, I’m not gonna say, ‘Oh yeah, we’re gonna get him ready’… come on…wake up…it ain’t gonna work,” he said.

“We have to fight our strengths, we have to find ways of opening the doors to where his weaknesses are and likewise. This is basically the classic grappler versus striker fight. Keep in mind that they can both grapple and they can both strike, it’s just one is better than the other at (each discipline).

“We’re the better grappler, he’s the better striker, but that doesn’t mean we won’t strike, it just means he’s better. It’s about who plays whose game.”

Mendez then went onto discuss Khabib’s fight with Al Iaquinta an how he outlasted the New Yorker, at moment when Nurmagomedov was completely ignoring what he and the rest of the cornermen were instructing him to do.

“In the first two rounds, he fought exactly like we wanted him to. In the third round, what happens? Nope, he does one takedown, he shot once — he chains takedowns he never just does one shot — and then he started comfortable hitting Iaquinta with the jab. His chin up high, he wasn’t moving his head right. Khabib was doing all the things you aren’t supposed to do, but yet, he was still out striking him 4-1 if not more,” he said.

“He was comfortable doing that but I was not happy with that because I told him, ‘You’re going to get comfortable hitting him, I don’t want you to do that’. He does that for the first few rounds and then finally I tell him, ‘Obviously, you’re not going to listen to me and your father, but do me a favor, do half of what you want to do and do half of what we want’. I said, ‘Okay, can you do that for me?’ and he said, ‘Yeah’, so that’s why you’ll notice in the fifth round he took him down again. He did the takedown and then he did the standup like he wanted it.”

Though there will be a definite strategy in place for the Irishman when he meets the Russian at UFC 229, Mendez honestly thinks once the octagon door closes, neither he or John Kavanaugh will be able to control what happens once their fighters once the fight starts.

“If that’s what he wants to do, that’s what he’ll do. Obviously, that’s not what I want, I want nothing to do with Conor’s stand-up…he’s too good.”