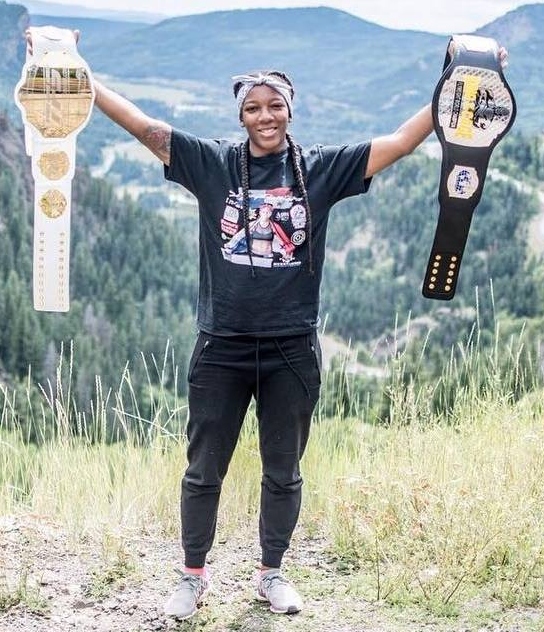 Panama native, Joselyne Edwards is a top prospect in the bantamweight (135) division. Edwards is 8-1 and on a 7-fight win streak at only 23 years of age. “La Pantera” is making her LFA (55) debut this Friday after winning the KOTC title this past September. Edwards will be taking on Sarah Alpar (7-4) for the vacant 135-pound title.

First of all, how did you get into MMA? Also, do you have any background in any other type of martial arts?
“I started boxing when I was 13 years old, after four years of boxing, I started doing MMA when I was 17. I had seen the UFC on the TV in my home of Panama City Panama, but I did not know a gym that taught it. I then started doing jiu-jitsu and six months I debuted in MMA.”

What do you do for work or would MMA be your full-time job?
“I stopped studying to be a Nutritionist in Panama at the local college so that I could be a full-time fighter. When I got the opportunity to go fight in the United States and train there.”

Can you talk about your culture? Your last few fights have been in the US so living in Panama have you enjoyed the travel?
“With my culture and my native language as Spanish, sometimes being in the United States has been difficult because of the language barrier but I enjoy the time I have been able to spend in the USA, and I love traveling.”

You have one loss in your career. How did that change you as a fighter and what did you learn?
“What I learned from my loss, was that a fighter should never enter the cage when they are injured. I came back from the Pan-American games for Jiu-Jitsu, and I was injured from the PanAms.”

What has been the high of your mma career and what has been the low?
“Winning the championship for King of the Cage was the highest point in my career, Brenda Gonzales was a very highly touted prospect, and I was able to earn a victory over her. The lowest point of my career, was when I lost. I feel that my biggest moment is starting right now.”

Explain a normal day in the life of Joselyne Edwards?
“A normal day in my life, I enjoy going to the movies, eating. I have given up my normal life, to pursue this MMA career.”

What do you like to do outside of fighting?
“I am focused on making it to the top of the sport, and I will not rest and pick up my normal life again until I accomplish this goal.”

You’re fighting Sarah Alpar. What do you think of her as an opponent and how do you see this fight playing out?
“Sarah Alpar is a highly ranked fighter, and a solid, brave opponent, but I came to win, and she is in my way of accomplishing what I have dedicated myself to do.”

Fighting for a promotion like LFA and fighting for their title has it crossed your mind that your just small steps away from reaching a promotion like UFC or Bellator?
“I think this is a big opportunity, and I feel close to reaching the top of the sport, so I am going to give my best, and we will see what happens after this win. I did not sacrifice my education, and everything in life, to come here and NOT win.”

Why do you fight?
“I fight because fighting is my passion, and I feel free when I am fighting.”

Do you keep up with your division? If so, what’re your thoughts on the state of the division?
“Of course, I follow the 135lb division. It is a division with a lot of potential, but I feel that I am on a different level than all of the competition in the world at 135lbs.”

Cat Zingano Talks About The Future Ahead of Bellator 282

Johnny Eblen Says Probability of Winning is High for Bellator 282