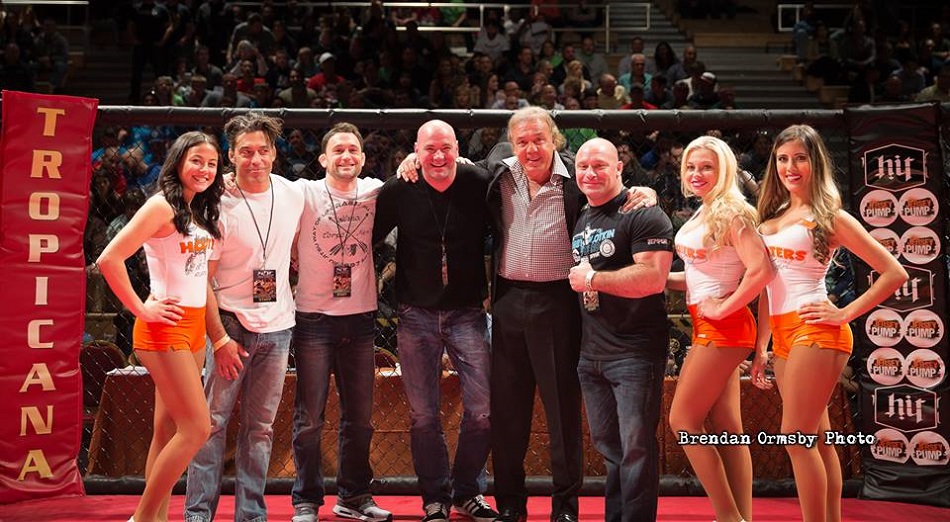 The Numbers don’t lie.  Well over 100 fighters have fought for Louis Neglia’s MMA promotion Ring of Combat and gone onto sign contracts and fight in the UFC.  Lou always puts on cards stacked with top-shelf talent.  ROC 58 is no different as three championship belts will be on the line.  Here’s my preview of the cards top battles… 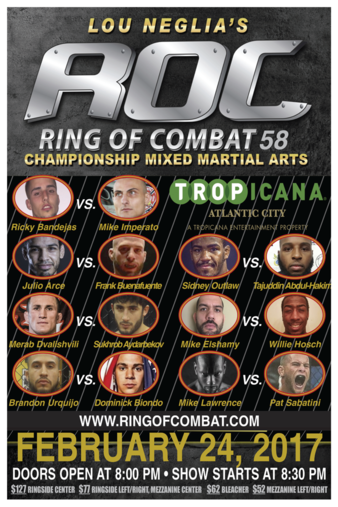 This is a rematch.  Arce defeated Buenafuente by unanimous decision in their last fight. Arce represents the strong team at Tiger Schulmann MMA.

He was able to stop the strong wrestling of “Mantis” (Carnicella MMA) in their last bout and take away the belt from Frankie by making it a stand-up battle and winning on all three of the judge’s scorecards.

These two warriors have many  loyal followers and fans and it will be a loud, raucous fight to close the evening.  It will be interesting to see if Julio can continue from their last bout and keep the contest on the feet and use his Golden Gloves boxing skills to again defeat Buenafuente.

Both fighters train with UFC veterans and have visions of making it to the next level.  This will be an action packed battle and probably go the distance. They both have strong cardio and wills.  A tremendous final fight.

Merab earned his shot at the title with an impressive victory over Tony Gravely. He trains with some of the best in the world as a member of the Serra-Longo fight team.

His grappling is his strength but each fight and camp that he goes through, his striking has shown growth under the tutelage of Ray Longo.

His opponent, Aydarbekov, fights under Terry Gold at the upstart Brooklyn MMA and has also spent time gaining valuable experience with Team Alpha-Male in California.   He is coming off of two consecutive victories, including a high-light reel head kick KO at ROC 56.

Another nice match-up in a stacked 135 lb division.

The Black Spartan, in his last fight, showed everyone that he was ready for a title fight with a vicious array of striking and ground and pound over Guram Mestvirishvili.

In my eyes, he’s one of the most exciting fighters in this regions MMA scene.  He trains with EFC MMA in New York and is a man on a mission.

His first two pro fights were victories at 185 lbs. His last two he made the successful cut to 170 and has looked dangerous in the cage. He showed great footwork, and patience in his last fight, before exploding and forcing the doctor stoppage.

His opponent, Sidney Outlaw will not be intimidated.  He has trained with some of the best in the world as well as fought them. At ROC 55, he may have lost a decision, but it may have been his best performance of his career.  He took Gregor “the Gift” Gillespie the distance in their title fight.

Gillespie had never been taken past the first round in any of his previous fights.  Outlaw took the All -American wrestler’s back late in round one with a RNC sinking in, but the bell stopped him from finishing the fight.  Gillespie bounced back for the hard fought win, but was definitely frustrated with Outlaw’s ability to adjust.

After this fight, Gregor immediately signed a contract with the UFC.  This could be the fight of the night!

This fight could very well determine the number 1 contender at 145 lbs.  Sabatini trains with MPR Endurance MMA under the leadership of Erik Purcell.  Pat calls him the “mastermind.”

Erik has a growing, legitimate fight team and has been busy cornering fighters it seems in almost every regional promotion in PA and NJ. MPR is definitely one of the up and coming facilities out of Langhorne, PA as it seems more and more fighters are finding their way there.

They have numerous members of the US National Sambo team training here and Brazilian black-belt Sabatini has soaked up every bit of knowledge possible.  He takes on the long, lean Michael Lawrence from Virginia and the MMA Institute.

He’s no stranger to winning as well as he brings his 4-1 mark to NJ to try and join the many, many fighters who have gone from a ROC championship, to a UFC contract.

These two have trained together in the past for a short period of time.  Despite the fact that they like one another, once the cage door closes, it’s “Go time” according to Urquijo.

Brandon hasn’t been in the cage to fight in over 15 months, but trainer Terry Gold of Brooklyn MMA says that is not a problem. His guy will be ready and will come out with a convincing victory.

Biondo, making his pro debut, will look to get a quick start.

Bandejas is carrying a spotless 8-0 record and is looking for more momentum as he makes his ROC debut.  He trains out of Nick Cattone MMA and is a huge prospect with a nice arsenal of ways to beat you.

Corey Simmons out of Ohio, may only have a 7-9 record, but he has taken on the toughest competition in the area and is a savvy veteran who always brings it.  He’s looking for the upset here and a win over Bandejas would be the biggest of his career.

Other fights on the ROC 58 card:

We will be cage side with updates and a full recap.  Check on the ROC post on Friday, February 24th for the up to the minute highlights and results

By Ryan Truland 54 mins ago