Louisiana has never had a shortage of prime MMA talent. From the early days of the sport’s inception, the state has been near the forefront. With current superstars like Dustin Poirier and Daniel Cormier as the state’s current torch-barriers, the next group of stars is on the horizon and ready to takeover soon. One of those is the undefeated welterweight (3-0), Chris Crosby. Ready to keep marching forward in his young professional career, Crosby is set for a huge welterweight title opportunity in July 2020.

Putting the World on Notice

Chris Crosby, a name the world will soon become familiar with, is current 3-0 in his professional career with all three of his victories coming by first-round finish. Making his amateur debut in October 2018, Crosby was able to make the huge jump to the pro level in less than a year. Don’t let the first round finishes lead you to believe Crosby does not have the ability to go the distance. On a handful of occasions as an amateur, Crosby went the distance with tough opponents. Crosby is deadly on the ground with a BJJ blackbelt and several IBJFF medals to show. Crosby fights out of Combat Athletics, a gym he founded located in Denham Springs, Louisiana. He has fought the best the South has to offer. Now he will venture east to Miami for multiple bouts with Global Legion FC. 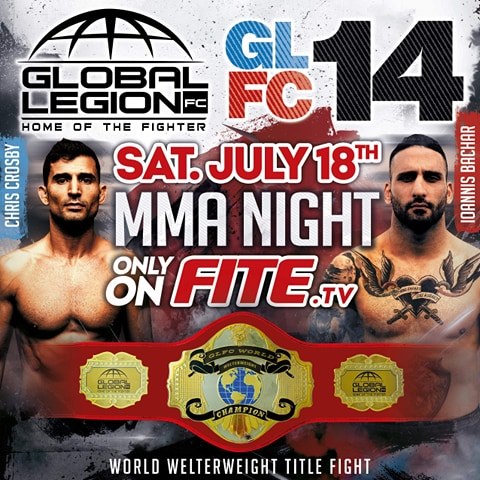 Crosby fought for Global Legion FC in December 2019 where he defeated the then-undefeated American Top Team Palm Beach Gardens product James Hay by first-round submission in less than two minutes. Now Crosby will battle for the welterweight title against Giannis Bachar who is a fighter based in Greece with a 5-2 professional record. Bachar has a previous victory under the Titan FC banner. He is also a proficient striker with most of his victories coming by way of KO/TKO. Their fight was originally scheduled for March 2020 but was postponed due to the COVID 19 outbreak.

Adjusting for the World Circumstances

For any organization aside for the UFC, It will be the first time many organizations are having an event in 2020. What is it going to be like to get back into full-speed “official competition” in the MMA ranks? “I’m really glad to have a fight scheduled, especially after everything being shut down for a while,” Crosby told MyMMANews. “I usually train better when I have something on the calendar, but during this break, I was able to add some things to develop my game.” In order to continue to maintain the safety of the public, the event will be a “no fans” event but will air, as of now, on FiteTV.

The “no fans” policy has been utilized by the UFC so far with success. But what will it feel like to the fighters who lots of times feed off of the public? “I don’t think I’ll mind fighting without fans too much. Obviously the fans bring tremendous energy and excitement to the event, but I’ve also competed in lots of Jiu-Jitsu tournaments as well where not many people are there cheering for you,” Crosby stated. “Plus, I know a lot of people will be watching at home. I’m really excited for this event.”