It’s been 16 months since a stunningly gorgeous Brazilian striking phenom by the name of Norma Dumont came over to the world’s leading mixed martial arts promotion, The Ultimate Fighting Championship.

She came over with a professional record of just 4-0, after a very successful Sanda (Muay Thai with takedowns) career, an art she boasts a black belt in.

Her career in Sanda showed her become a six-time state champion, as well as claiming one national championship. 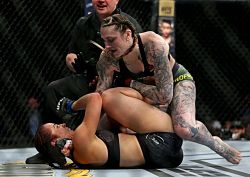 She absolutely dominated Evans-Smith, being awarded the universal 30-26 scorecard.

For an expert striker to be KO’d by Anderson, then defeat Spencer like she did, perhaps she wasn’t quite ready for an opponent of that caliber with just four MMA fights to her name. However, with just six she defeated an Invicta champion and former UFC title challenger with relative ease. 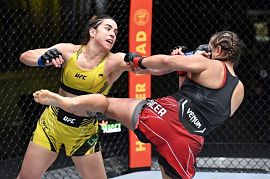 We know it was a split decision, but she clearly won that fight.

She ended up letting Spencer up just over a minute after taking her down, but it was impressive to see.

Spencer tied Dumont up along the fence and landed some strikes once she got back up, before Dumont separated from the clinch. Dumont then went for a hip toss and ended up on her back for the remaining 80 seconds of the fight. 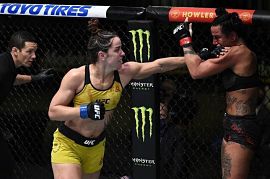 That gave Spencer round three, after Dumont took rounds one and two.

This was quite a sizable upset, really no one was picking Dumont to defeat Spencer.

Not only did Spencer have a clear advantage on the ground, being a high level BJJ black belt, but she also has a black belt in Taekwondo.

Her kicks are very tricky for her opponents to figure out, but not Dumont, someone who’s been striking for a considerable amount of time at this point.

Not to mention, Norma Dumont has a BJJ brown belt of her own, and boasts two submission victories. 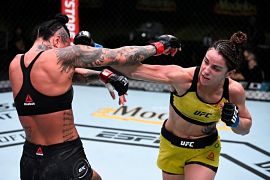 Surely Spencer would beat someone who got KO’d by someone she submitted (Anderson), right?

Once and for all, MMA math does not work.

Dumont did get a bit of a late start, first picking up training at 15 years old. She had to stop not long after to work as a secretary, given the fact her father walked out on her, her two sisters, and her mother when she was just four years old. 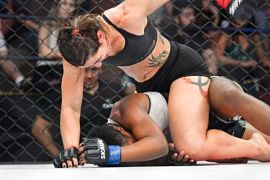 She was able to pick training back up at 19 years old however, and has accomplished a whole lot in this last decade.

At 30 years old, she isn’t necessarily a spring chicken, but she isn’t exactly old either.

It would’ve certainly been more beneficial for her to have started sooner, but she’s done a stellar job at playing catch up over the last several years.

What’s next for Norma Dumont?

By Pat Donohue 1 day ago

Demetrious Johnson vs. Rodtang: At The Heart of Martial Arts

Missing The Boat on Esparza vs. Namajunas 2 – A Career Retrospective on ‘The Cookie Monster’

By Lynyanna Collins 7 days ago

Is the pay per view model hurting boxing? (Probably)