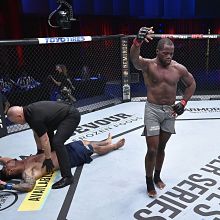 Nchukwi was just 4-0 coming in, all four victories via knockout, while Picket was 11-4 coming in, nine of those victories coming via knockout. Nchukwi looked incredible last night, he’s already so good, and at just 5-0 as a professional.

After completing a 3-0 record as an amateur with three knockout victories, he decided to turn professional. This was the correct move for him, he’s clearly good enough to be a professional mixed martial artist. He just showed us that by defeating someone with three times as much experience as him. 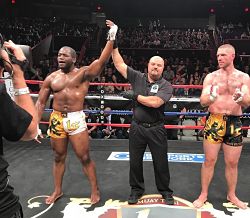 We thought coming in, he’d have to get a quick finish, because with the way he’s built, it’s going to be hard going three rounds. While it may not have been the easiest thing he’s ever done, he did it, and he looked great up until the final bell.

Nchukwi’s cardio is much better than you’d assume looking at him. This dude’s as thick as Yoel Romero, and the same height as well, he’s a big boy. That certainly translates to his power, but he doesn’t have an ounce of quit in him. Though he won the entire fight, he still pressed the action the whole time. 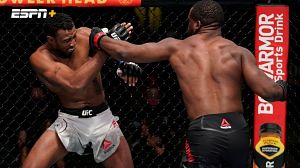 Some will fall off and coast in the later round(s) if they know they did enough to win the first couple, but not Nchukwi. He’ll keep coming until it’s over; until he stops his opponent, or until the final bell rings.

Nchukwi did almost finish Pickett in the middle of round three, and honestly, it should’ve been stopped. There was no excuse for that referee to let that fight continue, but you cannot rely on MMA officials.

Nonetheless, he defeated Pickett via unanimous decision (30-25, 30-26, 30-26), his first time going the distance, and passing with flying colors. 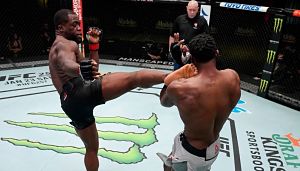 His striking is great, well rounded, and he hits like a truck. Nchukwi’s punches of all sorts, his knees to the body, and his head kicks are on point.

Nchukwi finishes a lot of his combinations with a head kick, but for being a Muay Thai champion, it’s surprising to see him kick the leg of his opponent as little as he did. He threw just one leg kick throughout the 15 minutes, and while he landed it, he should work on using them as a weapon as well. 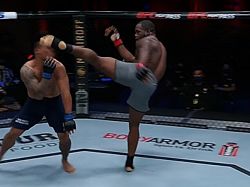 His hips are also strong as hell, every time Pickett tried to take him down, he was denied instantly, and even foot swept a few times. Nchukwi already has a ton of skills, and he’s only going to continue getting better in the years to come.

At 26-years-old, this young African talent could have another decade until he’s in his prime. He’s from Cameroon, the same place Francis Ngannou’s from, and as we’ve seen before time and time again, African’s have an unmatched ability to athleticism.

Tafon Nchukwi stands 6′ tall and boasts a crazy 77” reach, it’s insane the frame this man has alone, let alone everything he can do to his opponents once he’s in there. This doesn’t mean just throw him right to the wolves, prospects like this should be built correctly.

How do you see Tafon Nchukwi doing in his fighting future?