The trilogy is here.

UFC 252 takes place inside the UFC Apex tonight, Saturday, Aug. 15. Current heavyweight champion Stipe Miocic and former two-weight champion Daniel Cormier settle the score in the main event.
One of the hottest names right now is Sean O’Malley ranked #14 and he puts his perfect record to the test against fellow bantamweight Marlon Vera in the night’s co-main event.
In the first bout of the main card, Merab “the Machine” Dvalishvili (11-4)  looks for his fifth straight win against John “the Magician” Dodson (21-11 ranked #12).  Dodson is 3-3 in his last six but those 3 losses were to Marlon Moraes, current champion Petr Yan and Jimmie Rivera who are all among the highest rated in the UFC’s bantamweight division.  Dodson is well aware of Merab’s dominant take-down numbers.  I expect him to fight from the outside and try to come in with flurries to take advantage of his speed.  The Machine is currrently #15 in the rankings and is looking to move even higher with a victory in the kick-off to the PPV main card.
This is how the fight went down…

First 30 seconds fighters just feeling each other out. Merab Dvalishvili with a beautiful quick take-down but Dodson get’s right up but the Machine has him from behind pinned up against the cage. Merab landing knees that are definitely scoring. Controlling the position with Dodson pushed up against the cage still as  Merab continues to beat the legs up. Knee after knee after knee to the thighs. Dodson finally manages to get free with 50 seconds left in the first round. Round ends as Dodson throws a left that is blocked

Merab with the shoot for the ankle pick and throws a right that lands on the way in. Merab with a double leg and picks up Dodson and carries into the center of the cage and drops him. Dodson rebounds nicely and is back to the feet. Spinning back-fist and then a right hook lands from Merab. Back to the cench with Dodson’s back against the cage. Merab lands an elbow and picks up Dodson once again and takes him down and Dodson is immediately out.  The Magician is very slippery. Back to the center of the cage and no significant blows before the end of the round that finished as Merab with a nice double leg attempt that was in deep as the bell sounded for round two

Dodson throws left that is defended. Nice leg kick from Merab. Merab looks fresh and continues to push the pace. Nice right on a level change from Merab as he continues to look sharp. Another shot from Merab and he picks Dodson up again and scores another take-down but Dodson again right out. Nice leg kick from Merab and one back from Dodson. Merab continues to press the action. Dodson lands a nice right but Merab shakes it off. Merab continues to work on the stand up and use it to help with his grappling. Throwing  nice hands and kicks and talking to Dodson tell him let’s go showing emotion. Spinning back fist attempt from Merab and he follows it up immediately  with a double-leg shot and another take-down as Dodson is impossible to keep down as he’s right back to his feet but pressed up against the cage. Merab still pushing the pace and has Dodson pressed up against the cage for the last 20 or 30 seconds landing hammer fist to the thighs and back to the center of the cage as the fight ends

In the post fight interview with Joe Rogan, Merab was very humble giving a lot of credit to Aljamain Sterling..

“I’m not even tired.  I am like this because of Aljo.  He has helped make me what I am.  He is the best in the world in this weight-class.”

When Rogan asked him what he thought of his next opponent he said..

“Good luck tonight, Sean O’Malley.  We will see what happens and go from there.” 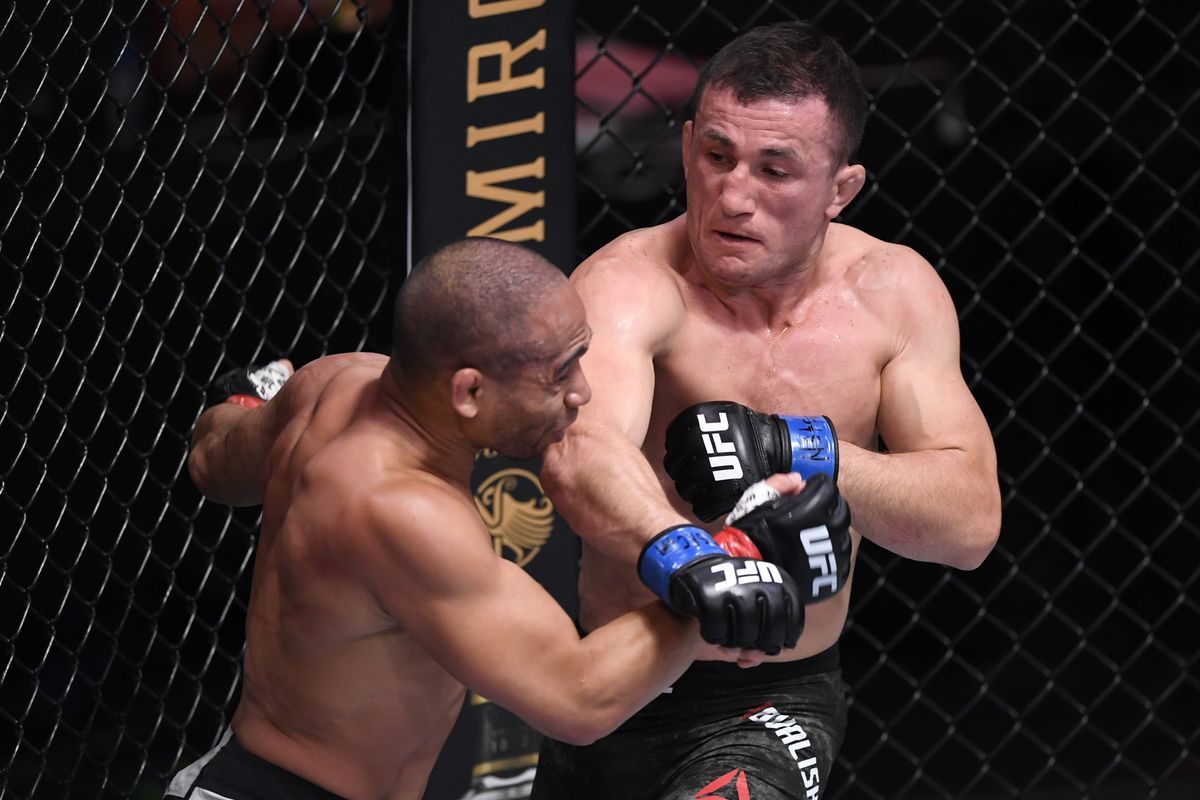