Polyana Viana (13-5) made a name for herself twice on Saturday night.  First, it was her vicious 47-second finish over Jinh Yu Frey at UFC Vegas 64 that got MMA fans talking about the exciting 115-pounder.

That performance may have then been topped by a response the victorious fighter later put on Twitter.

MMA reporter Alex Behunin does an outstanding weekly column called “Humanizing Athletes” where he does sort of an informational piece on some of the items that interest fighters.

Behunin posted his feature with Viana and tagged the fighter on Twitter.  What happened next was nothing short of epic.  Fresh off her first-round TKO win, Viana responded “Colby wanted me to finger him in the ass, but I did not want to. He got upset!”

Viana’s post was in response to former UFC welterweight title contender Colby Covington’s remarks about her in 2021.

“Everybody’s going to have to use their imagination on that one,” Covington told Submission Radio about his relationship with Viana. “I am not claiming to be your boyfriend, but what’s up with titles these days? Why does there have to be a title? Why can’t two adults just have fun together? And that’s exactly what we did. We spent a couple of days together, and had a great time together. I got to work on my bedroom cardio, keeping world-class championship form. And that’s that. I have got nothing but respect for her. Polyana is a great girl, beautiful girl.” 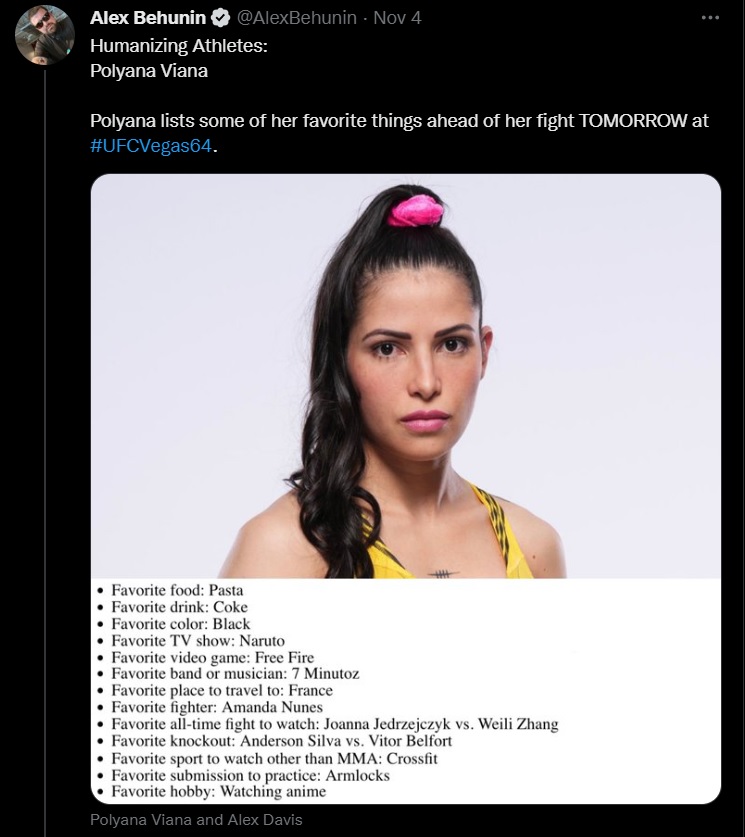 By Adam Martin 43 mins ago