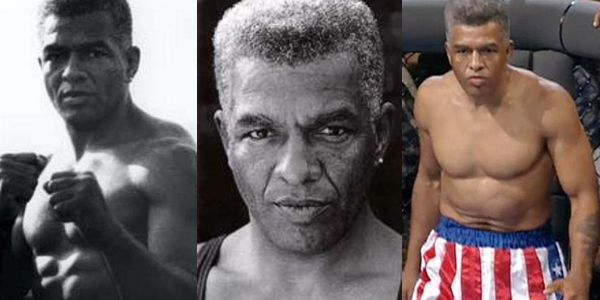 Ron Van Clief will forever hold the record of oldest competitor to compete for the UFC as he was 51 years of age when fought Royce Gracie at UFC 4 in December 1994. Now at 75 years young, Van Clief reflects on a life of a martial arts.

Tony Reid – You competed in some of the earliest UFC events. What were your thoughts and feelings at the time about entering the competition and your performance? What are your thoughts looking back now at your time spent in the Octagon?

Ron Van Clief – “I saw UFC 3 at my student Howard Niego’s home. I was hypnotized. It was so pure and real. How could you not want to do it? At that moment I knew I would have to do it. I trained about 6 weeks…Kickboxing, Wrestling, etc. My Coach Mr. Leon Stevenson broke my left ankle one week before I stepped into the Octagon. It is indeed a task to get a 51 year old body in the shape I thought I would need to be in. I put on 15 lbs of muscle from my normal 175lbs to 190lbs. Weight Resistance and Cardio was the mainstay of my cross training for UFC 4. It was interesting that no one thought I would really fight in the UFC. Imagine drawing Royce Gracie as your first fight. Wow! I have taken a lot of bullshit about tapping out to Royce after three minutes and forty-nine seconds. Tap out of go to sleep! It was one of the most interesting competitions I have ever had the honor to compete in. I developed a good friend ship with Dan Severn during my time as a competitor and commissioner. Rorion Gracie asked me if I would take the position as commissioner. It was wonderful.”

Tony Reid – Most MMA fans will remember you as you were 20 plus years ago. What do you do for a living now? Are you still involved in martial arts in any capacity?

Ron Van Clief – “I am presently retired and bringing up my son Kai. I teach two classes a week for children 4-10 yrs old at Montessori School here in St. Thomas. On Sunday my black belt class I teach 10am to 12 noon… Rain or shine. Presently I am working with a new MMA franchise World Class Athletes and their new event. I have been given the position of commissioner of the new MMA league. Funding is happening as we speak. Should be up and running early 2012. We are going to give the UFC a run for the money. I just finished my book “The Hanged Man: The Ron Van Clief Story” which will be out next month December 2011 available at amazon.com.”

Tony Reid – I am currently re-watching every UFC event starting with UFC 1 and moving forward. Being a part of that history, what would you want me or any fan to take away from the early days of the UFC?

Ron Van Clief – “THE UFC WAS PURE! No weight divisions or time limits is the real deal. The new UFC is big business and a global entity. Dana White has done an amazing job! In 1995 I predicted there would be a UFC 100. I was at UFC 133 courtesy of Dana White. Thanks again, Dana.”

Tony Reid – Do you still follow the sport? If so, what are your thoughts on the growth and expansion of it? Do you have favorite fighters that you enjoy watching today?

Ron Van Clief – “I am an MMA addict. I watch all the events Bellator, WEC, PRIDE, etc. I like GSP, Silva, Velasquez, Carter, Renzo Gracie, Matt Hughes, Tito Ortiz, Chuck Liddell, Rampage Jackson and Rashad Evans. There are so many great ones out there today. Cross training has changed the nature of the MMA game. MMA is already more popular than boxing. MMA in the mainstream with be global participation, maybe an Olympic Sport?”

Tony Reid – Do you still keep in touch with any of the guys you worked with back then (competitors, trainers, sponsors, etc.)?

Ron Van Clief – “I really don’t keep in touch with the MMA crowd as I used to before I moved to St. Thomas. Dan Severn and I worked at the first UFC Fight Camp together.”

Ron Van Clief – “My fondest memory was hearing Big John McCarthy say “ARE YOU READY?” I smiled at him like a little kid in a toy store. I got my wish. It didn’t matter one bit that I had broken my ankle a week earlier. A little self hypnosis helped me with the pain. My worst memory was opening an elevator door at UFC 5 or 6 and seeing Tank Abbott and some of his goons stomping a UFC competitor on the floor in front of his wife and son. I will not mention whom they were stomping. It was a disgraceful situation. And one I will never forget. Nothing ever happened from the management of the UFC they pretended it didn’t happen. Going to court representing the UFC in early cases in which Senator McCain called me an animal/pit bull. I believe I resigned from the UFC at UFC 7 or 8. It is so long ago I don’t really remember.”

Tony Reid – Can you share a behind-the-scenes story from your days in the sport that the average fan would not be aware of?

Ron Van Clief – “Fact- I received $1,000 for fighting Royce Gracie and $5,000 per event when I was the commissioner. Not much money but I loved the sport of MMA. I’d do it again but I am too old to take a beating. I created the Superfight Championship when I recommended it to the UFC management. It was a nice way to see the champions from different UFC events fight each other. We created the bad guys like Kimo, Tank, and The Beast. Most promoters don’t care about the fighters. It is strictly a money thing.”

Tony Reid – Thank you so much for your time, Ron. I really appreciate it! As a huge fan of the sport and a member of the community now, thank you for your contribution to what is now the greatest sport in the world.

Ron Van Clief – “Tony, thank you for the interview opportunity. Nice speaking with you.”