Have you heard that Anderson Silva outboxed Julio Cesar Chavez Jr. this past weekend? Of course you did. It was the biggest news of the weekend over The Korean Zombie, Naoya Inoue, and anyone else. Silva’s win over Chavez Jr. brought back the Silva of old and gave fans, new and old, a look at the Anderson Silva of yesterday. But the win was much more than that. The win marked Silva’s swan song after years of issues in mixed martial arts.

This feels so good. pic.twitter.com/90WD3Bi0wf

Boxing vs. MMA has always been the debate. James Toney stepped over to MMA and Conor McGregor stepped over to boxing; both lost. There has been those that have had success like Clay Collard and more recently, Claressa Shields, but by and large, the fighter stepping to the new sport loses. Anderson Silva was one of those exceptions. But unlike Collard and Shields, Silva is far removed from his prime.

For fans who were not around during the reign of Silva, it was special. Before Conor McGregor, Israel Adesanya and Nate Diaz, there was The Spider. It wasn’t a matter of if Silva would win, it was how. From the Hail Mary triangle that saved his title last minute against Chael Sonnen to the iconic front kick on Vitor Belfort, Silva was electric. He was Israel Adesanya before Israel Adesanya was Israel Adesanya.

The Fall of The Spider

Anderson Silva’s fall from grace was drastic. After losing his belt to Chris Weidman, Silva returned with the infamous leg snap in the rematch that saw The Spider sidelined for some time. Silva then returned for a lackluster fight against Nick Diaz before the decision was overturned due to failed drug tests from both fighters.

Then, Silva was boxed up by Michael Bisping and some fans thought he won with the flying knee at the bell in the fourth round. But, Bisping would go on to win that fight via decision and eventually claim the belt. After Jon Jones failed his drug test, Silva stepped in on short notice and lost to a heavyweight, again forgivable.

Fans then were treated to a win over Derek Brunson and it seemed as if Silva might have been back. They would be wrong. He would then fail another drug test, this time receiving a two year suspension. His return after two years saw him take on and lose to Israel Adesanya, Jared Cannonier and Uriah Hall, each fight looking worse.

Anderson Silva showed a sharp decline in skills and many thought he didn’t have the ability to compete anymore. When the boxing match was announced, fans groaned knowing how past MMA to boxing bouts went. Silva was about to get chinned worse than before. Except he didn’t…

Instead Silva would come back with a vengeance. Not only did Silva beat Chavez Jr., he didn’t look terrible doing it. Fans of Silva’s were treated to the electric striker who taunts his opponents, has quick hands, and is crafty.

Now before we get into the weeds on how great Silva fought, let’s clear something up: Julio Cesar Chavez Jr. is not the World Champion level boxer he once was. His abilities have declined greatly. Not to take away from Silva’s performance, Chavez Jr. still has the muscle memory to box. But to call him a champ from his past is not comparing this version fairly.

All that said, Silva was still theoretically at a disadvantage in his return to boxing. But that didn’t stop him. While the early rounds were a bit slower, Silva would eventually find his groove and beat a boxer in his home country by the judges.

Silva’s win was a Renaissance, a return to form. While he couldn’t cut it in mixed martial arts any longer, the 46 year old still had the crafty veteran-ship striking that made him so formidable in the past. Not only did he box, he boxed well. The win over Julio Cesar Chavez Jr. was a swan song for fans of Anderson Silva that suffered through watching him lose in such horrific ways. 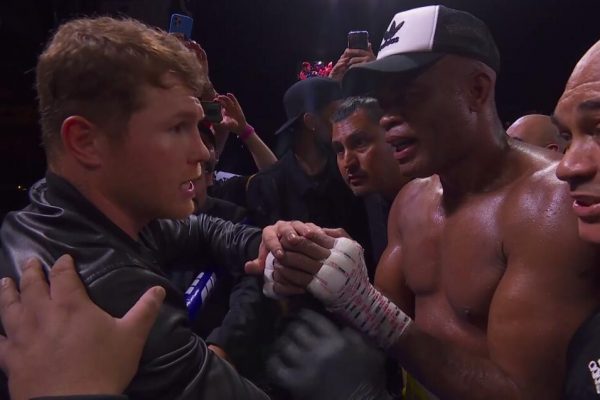 To put it in perspective, the return to glory for The Spider saw boxing’s pound for pound king, Canelo Alvarez, come over and express his gratitude for the former champion. This shows that Silva truly transcended mixed martial arts and grew to a level that many outside of his sport respected. Silva had the entire world, sans the Chavez family, in his corner.

So what’s next for Silva? More boxing almost assuredly. Roy Jones Jr. has been on the mind of Silva since his heyday and now, after Jones returned to fight Mike Tyson in an exhibition, that’s definitely a possibility. Maybe even in Mike Tyson’s Legends Only League. Silva may win more boxing matches or he may lose them. But the win over Chavez Jr. was a true monumental moment for any Silva fan and should he go on to lose, it won’t matter anymore. He’s broken the streak. He’s overcome the odds of stepping into boxing as an MMA fighter. He’s done it in the eyes of his fans.