Donald ‘Cowboy’ Cerrone will certainly go down in the history books as one of, if not the greatest fighter ever to have never won a belt.

Cerrone first got his start in combat sports competing in kickboxing and Muay Thai, where he went 28-0-1 with 19 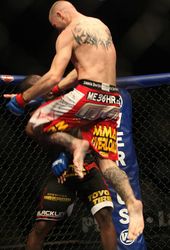 knockouts. After this very successful tenure in kickboxing, he’d transition to mixed martial arts, where things would take a pretty serious turn.

Once his MMA career started, Cerrone began submitting everyone, which is just astounding.

To be that well rounded that early into his career, he was a prodigy of sorts.

‘Cowboy’ didn’t even pick up his first knockout victory inside an MMA cage until his 16th win, but we’ll get to that shortly. Following a 7-0 start to his MMA career (all seven wins via submission), Cerrone would get called up by the WEC, where he’d win his first three fights with the promotion.

This saw him victorious over the likes of Kenneth Alexander (triangle choke) in his promotional debut, though the result was overturned, Danny Castillo (armbar), and then former WEC lightweight champion Rob McCullough (UD) in an all-out war.

The latter was an incredible fight between two former kickboxing champions, and if you haven’t seen it, we strongly suggest you go back and watch it.

This awarded Cerrone his first title shot, where he was narrowly defeated via split decision by then champion Jamie Varner. Cerrone would rebound with a first-round submission (rear naked choke) victory over then undefeated James Krause, before having another five-round war, this one with Benson Henderson in an interim title bout. 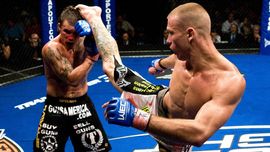 Though Cerrone lost this bout via unanimous decision, it honestly could’ve gone either way, it was such a close, back-and-forth scrap where each talent had a considerable amount of success.

This is also one of the better fights you’ll ever see. Again, if you haven’t seen it, it’s definitely worth a watch.

Cerrone then submitted (rear naked choke) Ed Ratcliff in round three of their bout, before he was again matched up with Henderson, who’d just unified the belt against Varner with a third round submission victory.

Henderson submitted (guillotine) Cerrone in just under two minutes this time around however, and Cerrone was now 2-3 in his last five, bringing his record to 11-3 (1 NC). 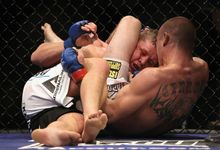 But Cerrone would avenge his defeat to Varner (UD) in his next outing, before submitting (triangle choke) Chris Horodecki in round two of his final WEC bout. 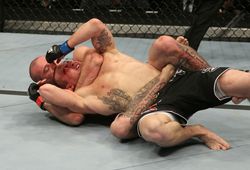 ‘Cowboy’ was very close to a title shot at this time, but next he’d run into Nate Diaz, who boxed him up for three rounds. Cerrone then defeated Jeremy Stephens (UD) and teammate Melvin Guillard (KO), before being stopped (TKO) by the last ever WEC lightweight champion, and future UFC lightweight champion Anthony Pettis. 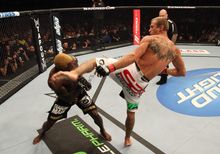 It appeared the Colorado native had some work to do, going 3-3 over his last six following a six-fight win streak, and get to work he did, as he won his next eight-straight fights en route to a title shot. 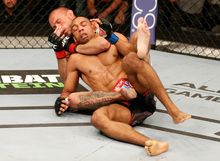 However, going into his title fight, which was a rematch with Rafael dos Anjos, Cerrone was dusted off in just 66 seconds via TKO. This was the second time he’d been finished with body strikes, perhaps all the Budweiser?

‘Cowboy’ felt a move up to 170 lbs would suit him well, and initially it did, as he rattled off four-straight wins up there, defeating Alex Oliveira (triangle choke), Patrick Cote (TKO), Rick Story (TKO), and Matt Brown (KO).

However, he’d lose his next three-straight bouts to Jorge Masvidal (TKO), former UFC welterweight champion Robbie Lawler (UD) in a very close fight, and another former kickboxer in Darren Till (TKO).

‘Cowboy’ fought at welterweight once more, impressively defeating Mike Perry (armbar), before returning to the lightweight division, where he rattled off two more impressive wins over Alexander Hernandez (TKO) and Al Iaquinta (UD).

Unfortunate for him however, as well as us fans, this would be the last time we’d see Cerrone win a fight. 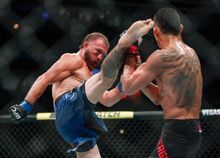 It was clear ‘Cowboy’ was aging, and rather quickly.

This led to him taking a year-plus absence from the sport, before returning at UFC 276 in a rematch with Jim Miller.

The UFC had matched Cerrone together with fellow bonus-winning legend Joe Lauzon twice in the months leading up to this fight, but each man was forced out of the bout the day of the contest; Cerrone for food poisoning, and 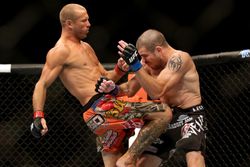 Lauzon’s knee locked up the second time around, forcing him out.

The UFC decided to just scrap that booking and replace Lauzon with Miller, which was also a great fight.

‘Cowboy’ knocked Miller out with a head kick in round two the first time around, and he threw, and landed another vicious head kick in the second round of this encounter. But, Miller ate it and initiated a scramble, which saw Cerrone locked up in a guillotine choke.

With Miller’s elite level grappling, Cerrone was forced to tap, making him winless in his final seven bouts prior to retiring. But, tis the sport, that’s often times how the best go out. It’s pretty rare a fighter calls it quits at the appropriate time. 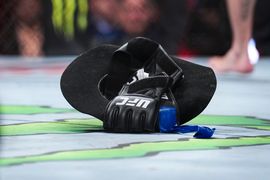 From an incredibly successful kickboxing career, to being an elite grappler from the very start of his MMA career (not picking up a knockout victory until his 16th win, 12 of first 15 wins via submission), Donald ‘Cowboy’ Cerrone will most certainly be remembered as one of the most talented, most game fighters we’ve ever seen in the sport.

‘Cowboy’ will without a doubt be inducted into the UFC Hall of Fame over the coming years, it’s just a matter of time.

Thank you, Donald Cerrone, for your long, illustrious, legendary career. It was surely fun to watch every single time you competed.

Below is a list of every accomplishment and record he holds: