It’s nothing like a slap to the face, snapping off a limb, or the gurgling sound of one gasping for air to get a viewer’s attention. In what has become a worldwide phenomenon, The Combat Jiu-jitsu Worlds has become the gold standard in proudly representing grappling combat sports. The campaign continues on June 6 with CJJ Worlds: The Welterweights. This event will feature sixteen world-class welterweights from the Jiu-jitsu and MMA world, all fighting for the opportunity to become the Combat Jiu-jitsu World Champion.

One welterweight aims to use the capturing of the title as a stepping stone to prove that anything is possible. Making his second appearance to the CJJ stage, TFC/ Brothers Jiu-jitsu Black belt, Todd Walling is a constant pursuer of competition. The thrill-seeking of challenges has equaled success in Walling’s grappling journey capturing many IBJJF, AFG, NAGA, and super fight titles, making him a much-watch competitor in his fight region. These accolades, without question, had earned him a spot in CJJ: The Lightweight division in November 2020, where he completed his first run as a quarter-finalist. Much has changed since the last CJJ Worlds, and so has Walling, as he looks to unveil his new fighting form to the entire world.

What makes him up for the challenge this time around? What drives him to become a champion? Walling reveals all in this exclusive interview with MYMMANEWS.

It’s always an interesting topic covering athlete’s motivation for competing in combat sports. You find yourself competing every chance you get. What drives you to compete?

Todd Walling: Competition is where you find if you can truly step up and perform. I can say that I went out there and gave it my all. Competition gives me something to work towards, something that keeps me from being still.

Speaking of competing, you recently took part in the IBJJF No-Gi Pan Ams. What are some of your highlights and positives you took away from the experience?

Todd Walling: I had two matches, won the first one by toe hold and lost the second match by points. I would say a few highlights would be from my first match. It was a little bit of a back-and-forth foot lock battle. In the match, I felt I was able to defend my opponent’s attacks and turn them into points toward my score. I was able to secure a toe hold and keep my opponent from rotating, which I believe helped. My second match was against an opponent from Fight Sport, who had previously won the 2020 No-Gi Pans. While I was a little nervous, this was a chance I would never be able to experience again. To feel the difference between a Black belt and a world champion black belt was night and day.

Your competition campaign continues, as you will be taking part in the Combat Jiu-jitsu Worlds: Welterweight division on June 6. What sparked your interest in returning to the CJJ stage?

Todd Walling: I had such a fun time on the first one and was itching to return. I feel like my game improves greatly just getting ready for these big events.

In your debut, was there any level of stress participating in the event?

Todd Walling: I would say the only stress I felt was the weeks before the event. Once I got to the event and saw the stage, I immediately got excited and was ready to go out there. It was a little different because past CJJ events were in the U.S, so the crowd was a bit bigger and more locally. The nice thing about it being in Mexico was that the crowd was small and I didn’t know anyone, so I didn’t feel nervous at all.

Watching your matches at Combat Worlds, that is a factual statement, as you didn’t seem nervous at all. What were some of the highlights competing at your first event, especially having to deal with watching out for submissions and strikes?

Todd Walling: I took a lot of hits in the first round. I was expecting my opponent to take me down and immediately start striking. I was a bit thrown off when he pulled guard. When I was in his guard, he threw tons of strikes, never really opening up for submissions. I knew I had to work fast, or they were going to start taking their toll.

My second match was against Nathan Orchard. This was a surreal moment in itself. I was about to grapple a guy I had watched his videos and used his move in rolling named after him. He took me down, then we had a slight scramble, and as I came up, I got caught in an Inverted Triangle. The moment he started to hit me; I knew that was the hardest ever been hit. He finished me off with a wrist lock in the end.

Most competitors give up after encountering numerous shortcomings. You must have an end goal or something meaningful that keeps you going. What keeps Todd Walling in the game?

Todd Walling: I don’t have an end goal. I will go until I can’t anymore, or an injury takes me out for good. What keeps me going? Knowing someone out there, just like me, is waking up 1 min ahead of me and putting in just a little bit more work than me.

Todd Walling: I am trying to induce more scrambles. Instead of trying to fight out a position that I may or may not win, I’ve been working on getting out from bottom position. I am also working more top positions where I can deliver more deadly strikes to the body or head.

So, it’s fair to say you are a different Todd Walling from your last CJJ appearance?

Todd Walling: Yes, I feel like weight-wise, this is more natural for me, and not having to cut my cardio and endurance are way better.

Todd Walling: I don’t think it will help me, but it could help others. I am 33 with a full-time job and two kids. It will show people that even a non-full-time athlete can achieve anything.

Todd Walling: This event is unique because some competitors who are given the opportunity to strike still won’t, and others who will be out for blood. I believe I am a must-watch competitor because I am looking for the submission or the TKO from strikes. Be sure to tune in everyone! 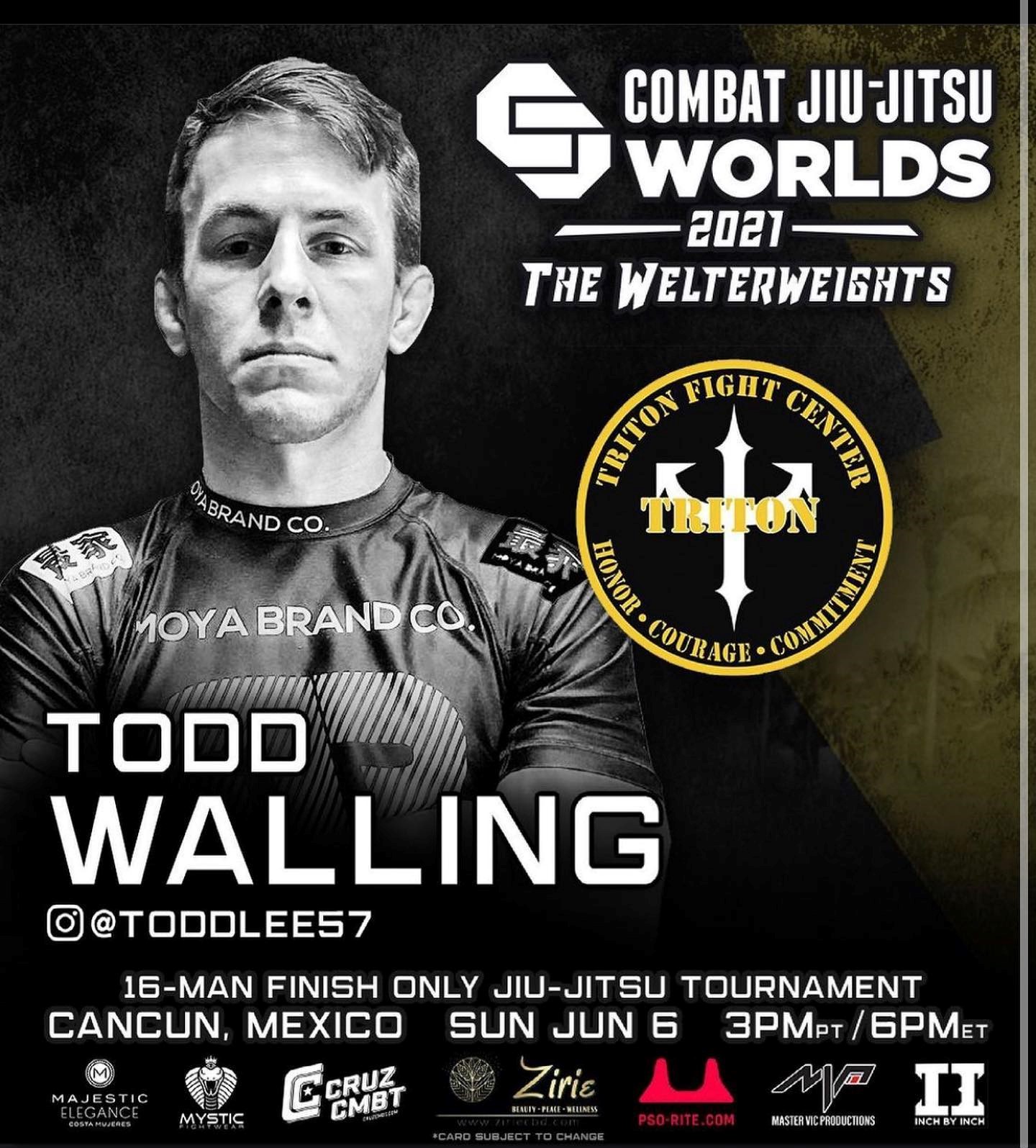