When most people are asked what sport is synonymous with the state of Indiana, their answer might be basketball or auto racing. However, Mulberry, Indiana can brag that it has a unique athlete among its 1300 residents. Chad “The Freak“ Finnerty is a professional mixed martial artist who fights at middleweight and light heavyweight.

Now, let us rewind for a moment. Finnerty had a successful high school wrestling experience at Clinton Prairie High School. A school corporation nestled between two cornfields in a small farming community in central Indiana. That success he found wrestling in high school led him to being a member of the Purdue University wrestling team, where he trained and wrestled alongside, fellow Boilermaker and UFC veteran, John Fitch. He was a member of the Indiana Greco Roman and Freestyle wrestling teams and has a career wrestling record of 192-8.

Roughly 18 years later, the divorced, overweight corporate salesman decided to change his life and at 38-years-of-age, he added mixed martial artist to his repertoire. Finnerty still works a full-time job and trains for his upcoming fights every day.

His first MMA fight saw the father of two, Finnerty, defeat his 25-year-old opponent and gain the respect of the fight fans in the building and the mixed martial arts community as well. Finnerty is starting to climb the promotional ladder and is currently in talks to sign with Bare Knuckle Fighting Championship.

I sat down with the now 41-year-old, Finnerty, who currently sits at 2-0 as a Pro to discuss how he got to where he is currently in the sport and where he wants to go with his career in MMA.

Tell me about your first wrestling match and then compare it to your first MMA fight. 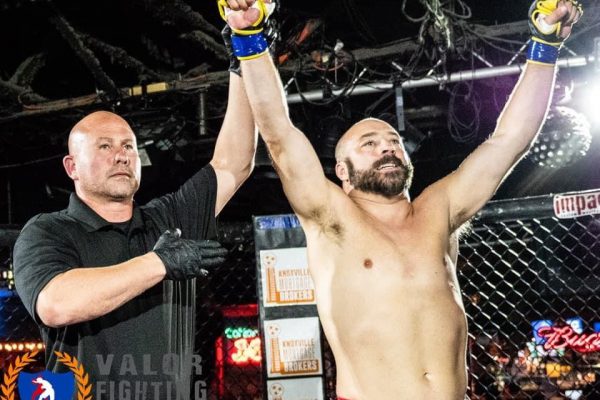 Finnerty: “Wow, my first wrestling match was back in 1992. I wrestled for Willow Creek middle school. We were wrestling Hobart and I won 16 to 2. It’s funny because my first ever MMA fight was against Trent Anderson, who was several years younger than me. I fought my first ever MMA fight when I was 38. Trent was 24 or 25 in Rainsville, Alabama at AFC 1. I took him down and controlled him every single round and won a judge’s decision 30 to 27.”

What made you decide to step into the cage at an age where most people would have just not even tried?

Finnerty: “My good friend Sam McAlpin approached me about helping him do some takedown defense for Trevor Peake’s upcoming fight. I started helping them with that and then just become part of the team. Sam was persistent about, ‘Hey, you need to try this,’ and I told him I would do it as long as they found somebody my age. So, they found somebody my age and about three weeks before the fight he pulled out. Trent was the only one that stepped in on short notice. I told him (Sam) I was doing one and done and it’s been 12 fights ago.”

You wrestled at a small country high school in central Indiana. How did it compare to wrestling at a university as substantial in size as Purdue?

Finnerty: “Night and day my time at Clinton Prairie was absolutely awesome. Once I got to Purdue it was all business everything was mapped out from weightlifting schedule, to the workout schedule to the conditioning schedule to actual practice. It was more of a business, and pretty much formed me to the curriculum or schedule that I have to follow today.”

Of all your fights, what was one that has been the most challenging?

Finnerty: “Probably both of my fights against Charles Philpot. He has several more wins, several more years fight experience. I lost both fights, but those were the two that really defined what I need to work on in my game the most.”

Where did your fight name “The Freak” originate?

Finnerty: “So, we were at our gym in Alabama and we had a young man named Jacob Harold come in and was trying out ’cause he said he wanted to fight.’ He went a round with Sam and then he had to do a round of wrestling with me. (Jacob had just come out of the Marines) I picked him up and hit him in a hard throw, he got up went and got sick and then come back in and he finished the round.

Somebody asked him, ‘What do you think about going against the old man?’ He kind of giggled and shook his head and said , ‘That man is a freak of nature. He is just a plain freak.’ At that point everybody was like, ‘Yep that’s the name! That’s what we’re sticking with!’”

Finnerty: “My kids and my hometown. I did this at first just for fun. Doing it as a professional athlete you get paid and so I do this for the kids. We take vacations. It just helps out with that. Then, there is the pride thing. I do it for my small little hometown. I don’t think we’ve had a professional athlete come out of Mulberry, Indiana. So, that’s been that’s what keeps me going.”

Tell me about your kids and what they think about you being a fighter?

Finnerty: “My son Zion is 16, and he trains with me some when we are together. He seems to like it and he knows most of the guy fighters. He follows it pretty good. My 13-year-old daughter, Carlie absolutely adores every one of the female fighters. If a female fighter walks in the room, I am trash and she runs to them. They think it’s cool that dad gets in there and fights.” 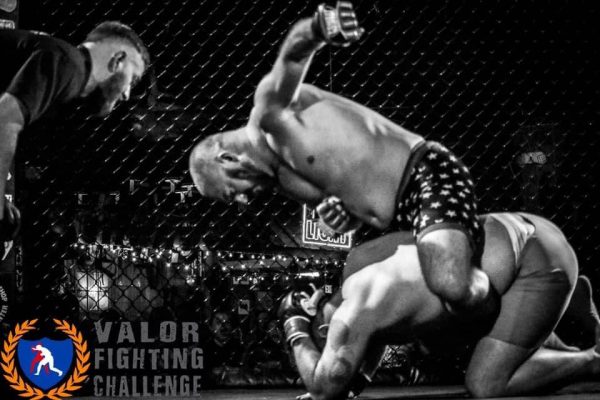 Who is your hero?

Finnerty: “Marty Rohrman. My high school wrestling coach. He is the one single handedly responsible for my tenacity, my grit, and my never quit attitude. After graduating, he became one of my closest friends. He passed in in the summer of 2020 and it almost set up even more of a drive to be successful because I knew that was something he wanted me to do.”

Where do you see yourself in three years?

Finnerty: “Dead, (giggles) in three years, Hopefully I have hung up the MMA gloves and I am coaching at my old high school, and if I am still fighting it’s possibly continuing on as a Bare Knuckle fighter.”

Where is your fight camp and what is the most brutal part of it?

Finnerty: “My fight camp is in Madisonville, Tennessee at Wolves Den Martial Arts. My head coach is Adam Silvey. The hardest part about any fight camp for me is my weight cut. I am not the best at dieting and I usually wait till the last minute. I love the work outs, I love the training, but the weight cut I can do without.”

Of the two weight classes you fight in, which one compliments your fighting style better?

Finnerty: “When I am at the lighter weight, 185 I am usually bigger than most of the guys that I compete against. At 205, they are big and strong, and they hit hard. My wrestling style is to take you down and grind you out. So, I guess you can say it’s more complimentary for me to be at 205. My style of grinding them out really sucks out their breathing and works their cardio a lot more.”

Speak about yourself as if you are someone who just fought you?

Finnerty: “I have had several of my competitors say that I am freakishly strong. You would not think that going in there against a forty year old that I would have the grip strength and the pure wrestling toughness that I do. A lot of them think because they are going against this forty year old man, that they can go in there and smoke him.  I am well versed in all aspects. I started out with nothing more than a wrestling game, and that only got me so far. I started transitioning to striking, then I got with Eric Turner at KMAA and we had to do Jiu Jitsu. As a wrestler, I don’t like being on my back, but to be successful, you have to be well rounded.”

Tell me about your upcoming fight?

Finnerty: “My fight on July 10th is with the Alabama Fighting League owned by Willie Evans. I will be fighting in the co-main or main event against Timothy Blevins for the 205 pound title fight. That is a rematch from a match that happened over a year ago, which was my last amateur fight. I won that fight in 34 seconds and Tim has made it apparent to several promotions that he wants a rematch and this was the first opportunity that we could make it happen, so we’re gonna do it.”

You recently signed with Bare Knuckle fighting. Tell me about that.

Finnerty: “I went to a tryout with Harrison Aiken back in October of last year. I just kind of started a love for that aspect of it. It’s my weakest aspect in the game, and so about a month ago I went and tried out for Bare Knuckle Fighting in Birmingham, Alabama. We did the full tryouts. We had to shadowbox, hit heavy bags, a punch meter and pad work. After that Nate Shook offered me a deal to make a Bare Knuckle Fighting debut, later on this summer.”

What is your ultimate goal in MMA?

Finnerty: “To be successful. I have got a title fight coming up. I want to win a belt. Just to keep improving. I want to get called up by a big promotion. It hasn’t really happened yet, but I did get the Toe The Line Series with Bare Knuckle Fighting, so I am well on my way to those goals.”

Thanks, Chad and good luck in all your future endeavors.

Lacey Padgett (formerly Neher) is an award winning Blogger, Freelance Journalist and Content Creator specializing in the sport of MMA. Lacey was an active member of the Women’s MMA advocacy group that fought on behalf of female fighters to get a fair shot in the UFC. After a hiatus to raise her children, Padgett is back to writing about the sport she loves.

By Cole Shelton 9 mins ago