As most of us know, Felder is taking this fight on five days notice, considering the No. 11 ranked UFC lightweight contender Islam Makhachev withdrew from the bout with staph infection.

This is incredibly unfortunate, that was about to be a wicked fight. We got to see dos Anjos fight Khabib Nurmagomedov back in 2014, we almost got to see him face Nurmagomedov’s protege this weekend, but it’s no longer in the cards. 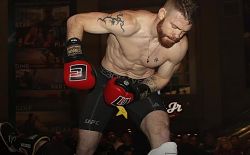 However, Felder is a great replacement, this fight is almost every bit as intriguing as dos Anjos versus Makhachev. It’s a completely different style match up. Felder is a big lightweight, this booking left many of us wondering if he’d be able to make weight.

Felder’s been training for a triathlon in the recent months however, so he’s confident he’ll make the required 156 lb limit. This fight of course remains a lightweight bout, and it remains a five-rounder as well.

Rafael dos Anjos came to the UFC with an 11-2 record back in 2008. After losing his first two fights with the promotion to Jeremy Stephens and Tyson Griffin, dos Anjos won his next three fights, the most notable being a submission (armbar) victory over the surging Terry Etim. 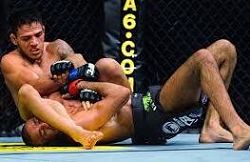 He then lost to Clay Guida in his next outing, who he ended up tapping out against due to a broken jaw, before KO’ing another surging talent, George Sotiropoulos, in just 59 seconds, who was 7-1 in the UFC with five finishes.

The Dunham decision was quite controversial, but nonetheless, he was on a five-fight win streak going into his fight with the 21-0 Khabib Nurmagomedov. After getting mauled for three-straight rounds, dos Anjos rebounded and came back better than ever!

No one had ever finished Henderson (21-3) with strikes prior, and defeating Pettis (18-2) saw him claim the UFC Lightweight Championship. He had a single defense of his title, his dismantling of Cerrone (28-6) 1 NC, before ultimately losing the belt to former multiple-time Bellator Lightweight Champion Eddie Alvarez (27-4). 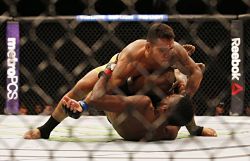 His fight with Alvarez was a tad early of a stoppage, but he was hurt, and nearly out on his feet, but not quite. He deserved a couple more seconds to try and regain his composure, but wasn’t given the chance. A huge congratulations to Alvarez though, he’s one of the best lightweights to ever do it.

Dos Anjos then lost his next fight to The Ultimate Fighter 13 winner and future interim UFC Lightweight Champion Tony Ferguson via unanimous decision (48-47, 48-47, 48-47). Next came a move up to welterweight, where he saw instant success. 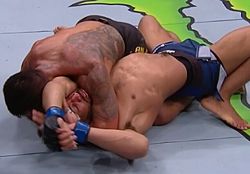 He rebounded from these setbacks with a fourth round submission (arm-triangle choke) over Kevin Lee, and then dropped back-to-back unanimous decisions once again, this time to Leon Edwards and Michael Chiesa.

Dos Anjos is now returning to 155 lbs to try and regain his throne, and Paul Felder stands in the way of that.

‘The Irish Dragon’ has also done very well inside the octagon. He came to the UFC with an 8-0 record in 2014, being a two-time CFFC Lightweight Champion. 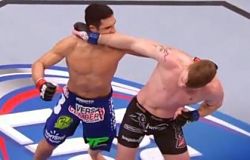 He fought Brazilian Jiu-Jitsu expert Jason Saggo in his promotional debut and defeated him via split decision, before KO’ing longtime WEC & UFC veteran Danny Castillo with a spinning back fist in round two.

Felder’s next bout came against Francisco Trinaldo, who was 20-4 as a professional and on a six-fight win streak in the UFC’s lightweight division, and what a war this was! Felder ultimately lost via TKO (cut) in round three, bringing his record to 12-3. 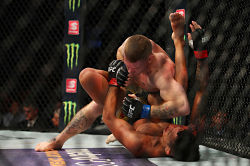 He went on a three-fight win streak after this however, securing (T)KO victories over Alessandro Ricci, Stevie Ray, and Charles Oliveira.

Felder then filled in for the injured Yancy Medeiros to face Mike Perry at welterweight, and again, what a war this was! Felder ended up losing the fight via split decision, but his stock rose up if anything.

Felder followed this up with back-to-back victories over James Vick (UD) and Edson Barboza (SD) in their rematch, and that brings us to his last fight with Dan Hooker in February of this year. This may have been Felder’s most entertaining fight yet! 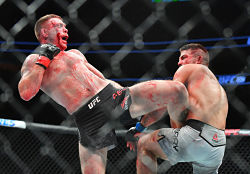 If Felder was given the nod in this fight, he may have ended up fighting for a No. 1 contender spot.

Facing a former champion and legend like Rafael dos Anjos, the same may apply for this fight. If he wins, he’ll be right up at the top of 155 lbs.

Both of these men are in their mid-thirties as well, it’s now or never to make a run for the top of their division. Felder turns 36-years-old in April, and dos Anjos just turned 36-years-old in October. They both continue steadily improving as well, which is pretty rare to see at their age. 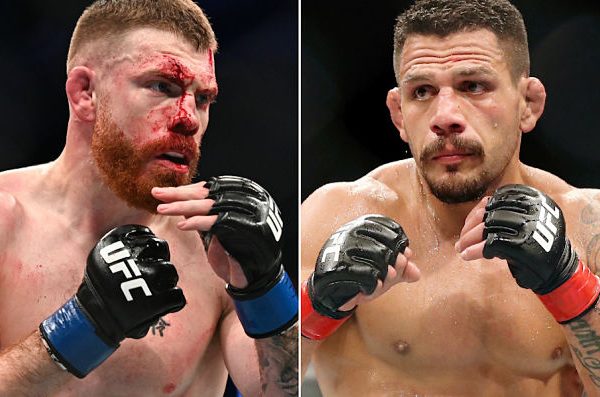 This is such a compelling match up, none of us expected this to be the fight we would watch this weekend. It’s truly unfortunate we aren’t seeing dos Anjos fight Islam Makhachev, that was about to be a real tell for where the Russian prodigy is at in his career. 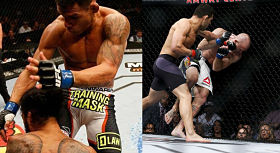 However, ‘The Irish Dragon’ is a great match up for him as well, and will also be quite telling. Felder’s always been a good fighter, but recently in the last couple years he’s really became one of the elite of the elite.

Dos Anjos has been one of the elites for some time now, and Chael Sonnen’s right, he’s really been given the toughest lineup of opponents in the sports history. The names dos Anjos says yes to, it’s insane. The dude never turns anyone down, whether than opponent makes sense or not.

Some may look at his record and think he isn’t that great because he has double-digit defeats, but just look at his resume. There aren’t many fighters in the world that would have less than 13 defeats facing everyone he has.

Felder got his start in Karate and Taekwondo when he was 12-years-old. He’s now has a black belt in Shotokan Karate, as well as a 2nd-degree black belt in Taekwondo.

Once he was in college, he started training Muay Thai, and then switched to mixed martial arts.

Dos Anjos got his start with Brazilian Jiu-Jitsu when he was nine-years-old, and now boasts a 4th-degree black belt in the art. His striking is also very dangerous, and his wrestling has improved greatly. He may have to take Felder down in order to secure a win, but even if, it’s still a toss up.

Felder stands 5’11” with a 70.5” reach, while dos Anjos stands 5’8” with a 70” reach. Dos Anjos will have to get his leg kicks going and show his hands often enough to where Felder is concerned with them, in order for him to secure a takedown and either control ‘The Irish Dragon’, or potentially even finish the fight.

Felder is going to have to rely on his takedown defense and strong hips in order to keep himself upright and land his strikes. He has some great leg kicks, but we don’t know if he’ll use them, that may just make it easier for dos Anjos to get him down.

By Mike Pendleton 17 mins ago