14 January 2017 – Jakarta, Indonesia: The largest sports media property in Asian history, ONE Championship™ (ONE), returned to the Jakarta Convention Center for another evening of world-class mixed martial arts (MMA) action. ONE: QUEST FOR POWER set the tone for what will be an amazing 2017 for ONE Championship with a series of compelling bouts featuring the absolute best in local and international MMA talent. In the main event, ONE Middleweight World Champion Vitaly Bigdash retained his title, defeating top contender “The Burmese Python” Aung La N Sang by unanimous decision after five rounds. 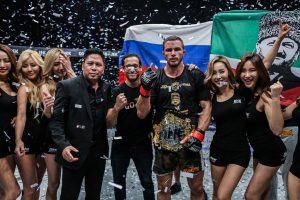 In the main event of the evening, ONE Middleweight World Champion Vitaly Bigdash of Rostov-on-Don, Russia impressed with a great show of strength in a dominant performance over “The Burmese Python” Aung La N Sang of Myanmar. Throughout the bout, Bigdash kept N Sang at bay with his sharp combinations, while on the mat he connected with multiple elbows. After five rounds of action, it was a clear win for Bigdash who met very little resistance in outlasting the durable N Sang to remain undefeated, retaining his ONE Middleweight World Championship.

In the co-main event of the evening, 27-year-old Martin “The Situ-Asian” Nguyen of Sydney, Australia authored one of the most spectacular finishes of the evening, stopping Japanese MMA veteran Kazunori Yokota with strikes to win by technical knockout just past the midway point of the first round. Yokota stalked Nguyen, looking to throw combinations but Nguyen timed Yokota with an overhand right that dropped him to the canvas. From there, Nguyen jumped on his foe and rained down punches from the top to earn the stoppage victory.

Lightweight contenders Vincent “MagniVincent” Latoel and Vaughn “The Spawn” Donayre put on an exciting show for fans in attendance, tagging each other with intense combinations for the majority of the three-round lightweight contest. On the mat, Donayre showcased his grappling skills, threatening with various submissions off his back. Latoel however was more consistent throughout and scored points with his takedowns and cage control. All three judges saw the bout in favor of Latoel to win by unanimous decision.

The highly-anticipated lightweight showdown between Georgi Stoyanov of Bulgaria and Saygid Guseyn Arslanaliev of Russia ended on an unfortunate note, as the bout resulted in a No Contest ruling. Although Arslanaliev swarmed Stoyanov from the beginning of the bout and completely outclassed the Bulgarian, an ill-advised technical ground kick landed for Arslanaliev and Stoyanov was unable to continue.

Dutch featherweight standout based in Jakarta, Anthony “The Archangel” Engelen, put on a masterful performance, stopping Malaysian fight veteran A.J. “Pyro” Lias Mansor in under two minutes in the first round of a scheduled three-round bout. Engelen pressed Mansor up against the cage fence with a combination before a beautiful right hand felled Mansor, earning Engelen one of the most spectacular knockouts of his career.

Fans were treated to an action-packed clash of colossal light heavyweights as Igor Subora of the Ukraine and Sherif Mohamed of Egypt pushed each other to the limit in a tremendous three-round show of determination from both fighters. Subora effectively used his reach advantage to keep the smaller, stockier Mohamed at bay with his boxing throughout the bout. In the third round, both fighters fought through sheer exhaustion to make it to the final bell as Subora did just enough to outlast Mohamed to earn the unanimous decision.

Local martial arts hero from Jakarta, “The Terminator” Sunoto, brought the crowd to its feet with a riveting performance to defeat Cambodia’s Chan Heng by technical knockout just a little under three minutes into the first round. Sunoto wasted no time in taking the fight directly to Heng, challenging the Khun Khmer practitioner to a striking showdown at the center of the ONE Championship cage. Sunoto however, proved too much for the Cambodian after he gained mount and unleashed the ground-and-pound.

Unbeaten Indonesian flyweight prospect Stefer Rahardian defeated Jakarta-based Liberian fighter Jerome S. Paye via unanimous decision in the second preliminary bout of the evening. Rahardian showcased tremendous cage-control for the majority of the fight, smothering Paye with a consistent attack that left the Liberian stifled throughout the contest. The 30-year-old Rahardian left very little openings for Paye who just couldn’t get his offense going. In the end, Rahardian had just enough in the tank to complete a comprehensive three-round performance, earning the nod on all three judges’ scorecards.

Strawweights Rene Catalan of the Philippines and Adrian Matheis of Indonesia kicked off ONE: QUEST FOR POWER with a spirited display of mixed martial arts action, on a bustling Saturday night in Jakarta. After a dominant first round from Catalan, one that saw the Filipino attempt various finishes, the end came swiftly in the second when Catalan was able to execute an armbar to earn the submission victory.

In case you missed the action log on to www.onefc.com/livestream for the full replay of the fights at only US $9.99.