At this point, we’ve had some time to reflect on Jose Aldo’s last fight against Petr Yan at UFC 251 in July. He hasn’t been booked since, and he still has a wealth of fights left on his current deal with the UFC.

Aldo was hinting at retirement from mixed martial arts, and was also teasing a move to boxing. That motion was paused for a bit in order to stay with the UFC, a decision he made last year. He signed an eight-fight deal after his fight with Alexander Volkanovski, meaning his has six fights left on it.

It is of course up to him whether or not he wants to ride these fights out, or just simply ask for his release. Hopefully that doesn’t happen. Though Aldo isn’t quite what he used to be, he’s still one of the best in the world, and no one wants to watch a GOAT go out on three straight defeats. 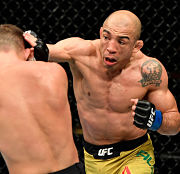 Despite not being the same as he once was, Aldo did look great at UFC 251. Round one of his fight with Petr Yan was very competitive and back-and-forth, though Yan did enough to get the 10-9 scorecard.

They both landed great shots, and we saw Aldo brought back his leg kicks for this fight, which was incredibly exciting, we were getting the Aldo of old. Yan landed a few hard overhand rights, and stuffed a takedown attempt from Aldo late in the round.

Yan ended up landing a nasty straight punch to Aldo’s solar plexus while he was down and hurt him badly with about ten seconds left in round one, though Aldo survived and came back out for round two. 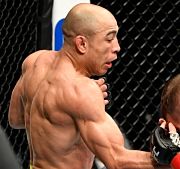 Rounds two and three showed Aldo pick up the pace and really start to leg go of his striking.

His leg kicks were working beautifully, forcing Yan to switch stances throughout the second and third rounds. Aldo even kicked Yan’s lead leg when he’d switch to southpaw, he didn’t give it a break.

Yan tried picking up the pace toward the end of round three, and he did throw a lot more, but Aldo’s defense held up and they were going into round four.

This has been the problem for most of Aldo’s career. He’s not a five-round fighter, despite how many five-round decision wins he has. 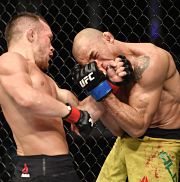 Round four is where the tide started to turn, and things weren’t looking so great for the former champion anymore. The round was back-and-forth, up until it was about halfway over.

Midway through the round, Aldo stayed on his bike and tried to retreat as much as possible, while Yan continued walking him down, landing hard shots.

Yan ended up pinning Aldo against the fence while he was teeing off and tripped him, remaining on top for the last minute of the round.

Yan opened up round five with a thunderous 1-2 combo and backed Aldo up with it, before dropping him. This spelled the beginning of the end for the former UFC Featherweight Champion. From here, Jose Aldo just took a massive amount of damage from the bottom, until it was ultimately stopped at 3:24 of round five. 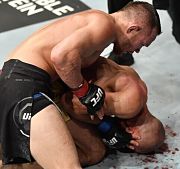 As mentioned above, Aldo just isn’t a five-round fighter. If this fight were three rounds, chances are he would’ve won 29-28, but it wasn’t, it was a title fight.

We did see great things from him on this night however. He brought his leg kicks back, something he’d gotten away from for a few years there.

The last time he really used them was against Chad Mendes in their rematch. He used them a little in the Max Holloway rematch, but he really just turned into a boxer that threw occasional knees in these last few years.

Jose Aldo also showed us he can still make adjustments, which he did in between rounds one and two, he just didn’t have the energy to keep up after fighting the No. 1 bantamweight in the world for over 15 minutes. 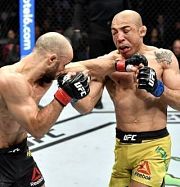 His bantamweight debut against Marlon Moraes was kind of a weird fight. Aldo didn’t do much in it, though most believe he clearly won. To Aldo’s defense, he pursued the action the entire time and did more, Moraes didn’t do much himself.

That was a three round fight, and his first fight at 135 lbs. Perhaps he wanted to make sure he could conserve energy in a new weight class, so he did enough to just get the W at all costs.

It worked out for him that night, aside from the controversial decision, but we see the extra two rounds hindered him once again in his next outing.

Aldo’s historically lost round five of many of his fights, such as his fights with Mark Hominick and Ricardo Lamas, but he handily won the first four and just had to hold on and not get finished.

Aldo has stated that he’ll be back stronger than ever following his fifth round TKO defeat to Yan, which is exciting news because it means we get to see him fight again.

There is a time to hang them up for everyone, but Aldo can still compete with the best in the world, he proved it at UFC 251. He just shouldn’t be in title fights or main events anymore.

Assuming he stays at bantamweight, what’s next for Jose Aldo? He’s still ranked at No. 7 in the UFC bantamweight rankings, but perhaps it’d be a good idea to give him someone ranked lower than him, rather than above him.

A fight with former UFC Bantamweight Champion Dominick Cruz would be pretty awesome to see. It looked like we were close to seeing it at UFC 207 at 145 lbs, but the UFC decided to have Cruz defend his 135 lb title against Cody Garbrandt that night instead.

They were both on top in the WEC, and they both stayed on top for a long time once coming over to the UFC, aside from Cruz’s numerous injuries of course. Cruz is ranked at No. 10 at the moment, that’d be the perfect throwback fight to put on.

There’s also the No. 9 ranked Raphael Assuncao, who had he defeated Urijah Faber back at WEC 46 in 2010, would have gotten the first crack at Aldo’s title. Assuncao was perhaps the quietest talent on the UFC’s roster that continued climbing the rankings for years and years, but just never got his shot.

Assuncao, like Aldo, is coming off three straight defeats. They’re both top ten Brazilian bantamweights, and they aren’t teammates.

There’s also the No. 8 ranked Jimmie Rivera, who though went from 21-1 to 22-4 over the last two years, he picked up a dominant performance over the 19-2-1 Cody Stamann just four days after Aldo’s fight with Yan.

Lastly is a match up with Pedro Munhoz, who is ranked above him at No. 6, but is a compelling match up that makes sense. They have a common opponent in Frankie Edgar, who Aldo’s 2-0 against, winning two five-round unanimous decisions against him, while Munhoz lost a five-round split decision to him in his last fight.

Not many people believed Edgar defeated Munhoz that night, even 17 of the 20 media outlets that scored it ended up scoring it for Munhoz. Nonetheless, Munhoz is still better than ever, and while Aldo isn’t, it would still be a winnable fight for him.

Regardless of who Jose Aldo gets locked in there with next, it’s a sure thing we’ll all be tuning in.

What’s next for Jose Aldo?