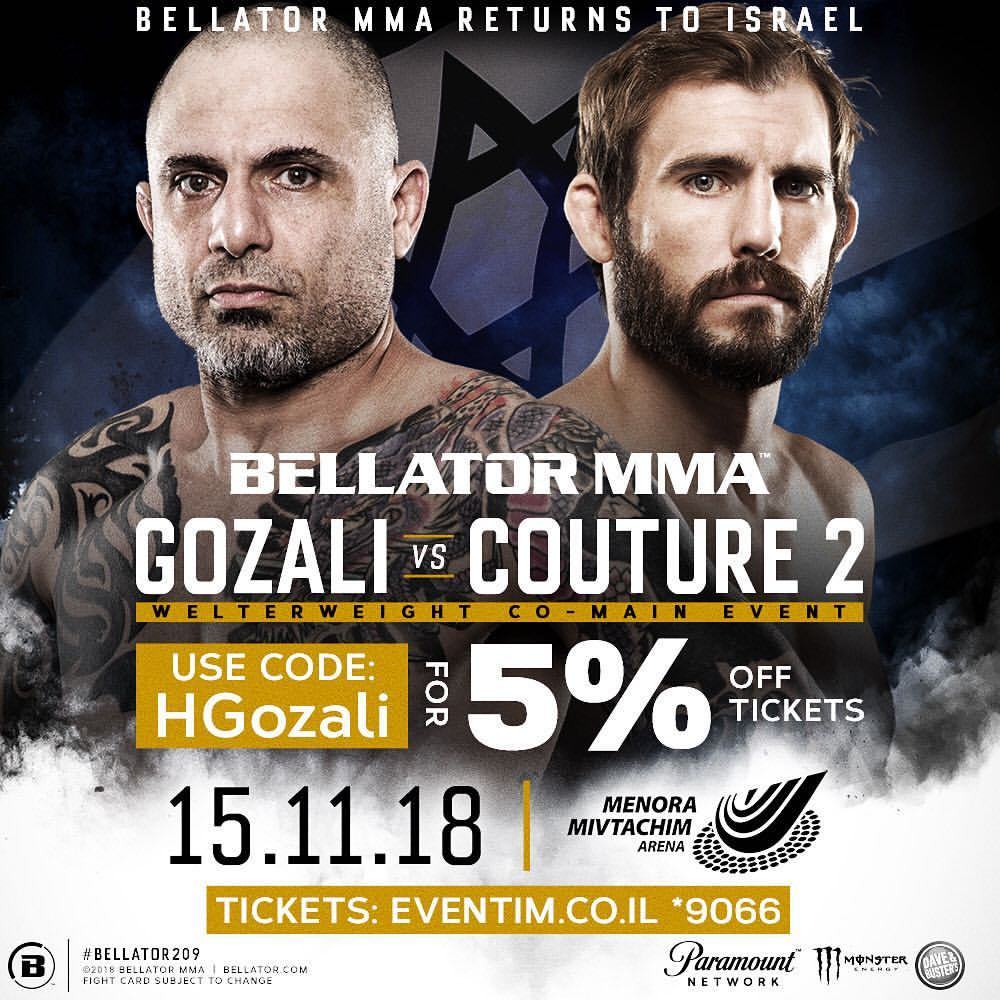 Bellator MMA returns to Tel Aviv, Israel, in less then 2 weeks, for Bellator 209. Mika Frankl spoke with Ryan Couture about his upcoming rematch with Haim Gozali, who he defeated at Bellator 180.

MF: How did this rematch come together?
RC: Shortly after my last fight, I got word that Haim was interested in a rematch over in Israel. I thought that was a cool opportunity. Obviously I like the matchup, felt like I preformed well the first time, and don’t see any reason the rematch will go any differently. And so I figured it was worth jumping at.

MF: With how you preformed the first time and how the score cards came out, were you surprised about having this rematch presented to you?
RC: A little bit, yeah. I guess I got to go out and do it even better this time. See if he wants to fight again I must have left something on the table last time or left some opening he felt he can exploit, so I got to go out and be that much better, and hopefully put him away this time.

MF: How much different of a fight do you expect this time?
RC: You know it hasn’t been all that long and we’re both far enough into our careers that I don’t see any major drastic changes happening. It’s just going to be a matter of what tactical adjustments he’s made and what one I’m able to make to make myself more effective. We get to see who learned more from the first matchup.

MF: Coming off the loss to Saad Awad, what adjustments have you made?
RC: Obviously disappointed with that outcome. Saw some mistakes I made. Some stuff I could have done better, but just continuing to improve everywhere really in general. And going back and watching the first fight with Haim to see where he had his moments of success and where I could have done things better. I’m trying to sure up my game so that I’m more dominate this time around. Definitely learned a lot from the camp and fight with Awad and am also trying to carry those lessons with me an evolve as a martial artist.

MF: You’ve been in the combat sports world most of your life. What if any factor will it play that your heading overseas to fight in front of a very pro Gozali crowd?
CD: No, I mean my only real concern would be that if the crowds enthusiasm has influence on the judging. I’d rather not leave it to the judges to decide. I feel some extra motivation to get in there and get the finish just cause I don’t want to see if that place will factor in on the score cards. You know it be such a bummer to go all that way and put all this work in and end up on the wrong side of a close decision or disappointed in how the scoring worked out, so I’d rather not leave it up to that. But other then that I’m not worried about it, for the most part I can tune out the crowd and don’t hear much of what’s going on anyway.

MF: Gozali likes to grapple, you’re looking for a finish. Are you thinking this is something where it’s going to come by strikes or you think you’ll find a submission?
RC: I think more than likely if I finish him it’s going to have to be strikes. He has great jiu jitsu credentials. He’ll be a tough out, submission wise, so I think the striking will at least have to set that up. So if I can break him down enough, striking standing, striking on the ground. Beat him up enough, rough him up to where he wants a way out, that would be my potential to win by submission. More likely I see KO or TKO if I’m gonna get the stoppage.

MF: Is this the kind of fight, the kind of guy where you’re going to have to stay in his face to break him, and find the finish ?
RC: Absolutely. I think that’s the kind of style that works best for me anyway. I’m at my most effective when I’m putting pressure on, trying to break guys down, which obviously with some of these power punches I’ve run into has worked against me, cause I’m not wired any other way. But I think keeping the pressure on him and just continuing to try an hurt him every chance I get in this fight is going to be key to breaking him down and want to quite.

MF: What dose it take to get your hand raised at Bellator 209?
RC: Got to be aggressive and fight smart. We know from the first go around, kinda where I was able to dominate that fight and where he had his opportunities. Just got to continually create those situations that play to my advantages. Keep the pressure on him. Try to wear him down and break him