Long-time UFC veteran, Diego Sanchez was released by the organization. Sanchez is coming off a loss to Jake Matthews at UFC 253 in September 2020.

A video was released of Diego Sanchez and his trainer, Joshua Fabia arguing with the broadcast team about how they speak about him. The arguing went back-and-forth as Fabia portrayed himself as defending his fighter against the way they broadcast speaks about him. The argument came after a fighter’s meeting with Sanchez.

Sanchez is an original UFC TUF champion. Now he finds himself on the Free Agency market for the first time in his career. After putting out feelers to gauge the level of interest from other organizations, Scott Coker, President of Bellator made it clear the UFC veteran will not be signed.

Scott Coker just told me that Bellator will not be looking to add Diego Sanchez to the roster now that he is a free agent.

Even “Sugar” Rashard Evans had something to say in a tweet, which is now deleted. 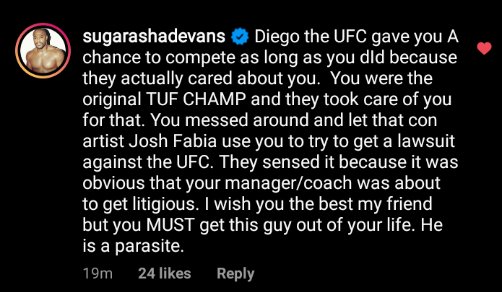 Diego Sanchez now has to make a decision with his career. UFC cut him, Bellator won’t sign him, and PFL MMA is already mid-season.

Sanchez is one of two fighters to have competed in four different weight classes in the UFC: Middleweight, Welterweight, Lightweight, and Featherweight; the other being Kenny Florian. He has also been involved in more “Fight of the Year” bouts than any other fighter in mixed martial arts

Where does the fighter with 16 seasons as a UFC athlete and 32 bouts go from here?

Stay tuned to find out where Sanchez lands to finish his career.