With two professional K1 bouts already under his belt, 19-year-old Callum Stuart is ready to display what he has improved since his previous fight when he faces his next opponent at Fusion Fighting Championship 30 on June 15.

After a year absent due to injury, Stuart is determined to continue his winning ways, describing to me how he is 10 times better than he was last year and skillset has improved immensely.

Last time out, Stuart impressed the crowd by defeating his opponent via brutal leg kicks in the very first round filling the youngster full of confidence going into his next matchup.

Stuart expressed his desire to make the transition to MMA at some point in his career. He told me he has been training BJJ with Mark Hobbs and is now very focused on improving his ground game. With BJJ competitions becoming available this summer, this is a competition Callum Stuart is excited to be apart of.

Team KFA has been Stuart’s home since day one, and when asked what enticed him to the gym I received an uncommon answer to this question. His Uncle and Auntie trained there before he joined, which left Stuart inspired to follow the family footsteps and try his hand at the sport. So far so good!

Fusion Fighting Championship is home to a large number of skilled up and comers just like Stuart and many others. Check out this exciting event June 15 at Epsom Downs Racecourse. 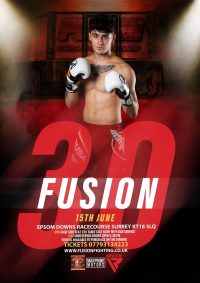