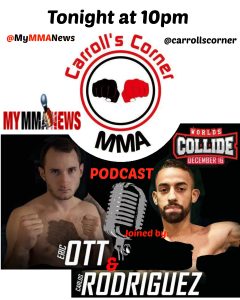 Throughout the show, the host, Kyle Carroll, discussed several topics with Ott and Rodriguez.

“It’s the toughest sport in the world,” Said Carlos Rodriguez said, while speaking about The MMA Athletes Association.

“It’s not a living wage,” Ott said. Rodriguez and Ott made excellent points when it comes to how important to fighters it is for the creation of an athletes association.

The sale of the UFC was also a hot topic and an interesting discussion.

A caller telephoned in with a question for Carlos Rodriguez. A fan of ACC and MMA in the NYC area asked Rodriguez his plan to avoid Daniel Rodriguez’s heavy right hand.

Want to follow these fighters, be sure to check out their social media.

Click the link below to listen to the show!

Check out the Next Carroll’s Corner MMA Podcast Live Sunday Night. Each Episode is on Blog Talk Radio.

Jamar McGriff: “I want it to be something flashy”

By Adam Crist 32 mins ago

Jon Jones will only move up to heavyweight if pay is right, according to manager

By Mike Heck 1 hour ago

By Monta Wiley 21 hours ago