UFC fighter Darren Till has come under fire this week after sharing a meme deemed transphobic by multiple critics. The post involved a transgender woman going for a ultrasound scan, captioned “when you transgender and you think you pregnant…” with a doctor pointing at a picture of excrement.

According to the Echo, the post has been reported to Merseyside police, with a spokesperson from the force commenting “enquiries are ongoing”. 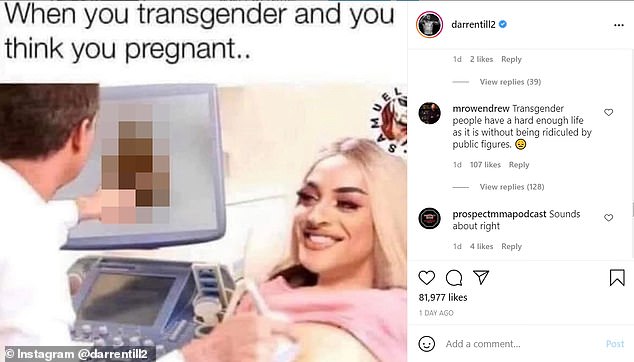 After being approached for comment, Till posted a video on Instagram, stating : “As everyone knows I’m always posting very controversial things right, I’m never going to change ever, ever, ever.

“So the other day I posted this transgender meme, I thought it was funny and I knew it was going to get a backlash.

“I’ve actually got transgender friends, they thought it was hilarious.

“You can’t cancel someone who doesn’t give a s*** and I don’t give a s***. But at the same time as well it’s obviously the offended brigade.”

Darren Till also took to Twitter where he promised more of the same, tweeting: “The post got 100k likes… it was a successful day of posting on Instagram I would say… I’ve got a belter post this weekend for u, even more offensive. turn post notifications on!!!!”

The post got 100k likes… it was a successful day of posting on Instagram I would say… I’ve got a belter post this weekend for u, even more offensive. turn post notifications on!!!! https://t.co/mU1o989c4c

The post was shared to Till’s 1.6 million Instagram followers on Monday and at the time of writing has amassed ninety thousand likes. As of right now, Instagram have not removed the post, despite reports stating otherwise.