Coming fresh off his attempt to take the title at ONE Championship: Lights Out, Garry Tonon is getting back to action at ONE 157 with the new grappling tournament as he faces Tye Ruotolo in the first round.

Listen to the full interview with Garry Tonon on YouTube or on your favorite podcast app below!

As mentioned above, Tonon made his first bid for the title at ONE Championship: Lights Out. He attempted to take the title away from incumbent champion Thanh Le. While Tonon had a heel hook cinched up, Le managed to turn and unleash some brutal ground and pound that knocked Tonon out. Tonon says the lock, while tight, wasn’t something he expected to win the fight with, especially at the level he and Le fight at.

“So I definitely popped his ankle. It’s not something that I would have expected a person in a title fight to tap to. It did damage similar to somebody throwing a punch and it not knocking somebody out but I don’t think I had him in a catastrophically bad situation where they really have much of a choice.”

The loss to Le was built up in the head of Garry Tonon as something devastating and detrimental. But he says that while he was upset he lost, it wasn’t the end of the world and he’s looking forward to rebounding.

“Basically, it was a lot less impactful than I built it up to be in my head.  I didn’t really know what to expect. I’ve lost in Jiu Jitsu before but it’s just a very different thing. In MMA the consequences are so much more severe. Brain damage and things can happen in certain situations and a lot more eyes are watching you, especially in a title fight. Honestly I think in all aspects, physically, emotionally, mentally, things weren’t as bad I thought they were going to be. I had never got knocked out prior to that point in competition or out of competition. I imagined that to be physically more impactful.”

The loss to Le never put Tonon in an existential crisis. He is still dedicated to fighting. But losing in MMA and losing in jiu jitsu are two different animals. Tonon reminds everyone, while he reached the top of jiu jitsu, he still occasionally lost from time to time. But I’m MMA, he’s only known what winning feels like and the loss was a grounding moment for him.

“I didn’t have moment where I was like, ‘Do I really want to do this anymore?’ People would ask my my thoughts on MMA vs. jiu jitsu and I would have to remind people, ‘Hey guys, I only know what winning feels like right now.’ I literally have never lost in this thing, I haven’t experienced real hardship yet. So my perspective on the sport is skewed because until you experience some hardship in the sport it’s all sunshine and fu*king rainbows. Oh yeah, what do I think about MMA? ‘Oh yeah it’s awesome! I beat people up and I make money.’ Of course it’s great.”

Garry Tonon vs. Tye Ruotolo at ONE 157

Now, Garry Tonon returns and takes on Tye Ruotolo at ONE 157 in a grappling tournament. It’s a big event that ONE Championship is putting on and the match caught him by surprised. But being the competitor that Tonon is, he said yes and is ready to have some fun where he originally cut his teeth.

“It was very random. I had no idea they were thinking of his happening or if they had signed those kids. I had no idea. They just sent me a bout agreement one day and I said yes.” Continuing on Tonon says, “They originally matched me with Kade and they changed it to Tye. I don’t know what happened, maybe they forgot which twin was which. Tye is a little bit better and a little bit bigger. It is what it is, very similar matches.”

The match with Ruotolo has been on the table for some time now. Timing wasn’t on either of the two’s time. But now, it is happening and Tonon is happy that it is now instead of earlier that the two finally meet.

“It was on my radar years ago. One of them called me out and we tried to set up the match when that was happening. I want to say it was somewhat during COVID and maybe…Then I think he got hurt a few times or something like that. I wasn’t sure if he was serious or not because I gave him the opportunity to do it. It didn’t seem to work out. But you never know what people are going through. I’m glad it came to fruition. It’s better that it happened now than it did back then because I think Tye has cemented his name as one of the best in the world. It’s even better to take the match now than to take the match then.”

While Garry Tonon is taking Ruotolo very seriously as he does with all his grappling, he remains adamant that it’s now mixed martial arts, not jiu jitsu, that is what is his priority. His training has changed, but that is because he’s not training for a title fight any longer.

“I’m still training because you never know what’s going to happen. Like I said, fighting is the priority. I don’t know if they’re going to try to schedule a short notice fight or whatever the case may be. So I have got to be ready at a moment’s notice. I’m always training.” He continues, “The type of training I was doing to prepare for Thanh is not the type of training that I’m doing now. There’s a certain degree of training that goes into preparing for a five round title fight. I was doing five rounds of sparring every fu*king day. That’s a bit of a stress to put on the body when it’s not necessary and you’re not about to enter that type of contest. I’m sparring and I’m doing my drilling that I normally do for MMA but I’m not doing it at the same intensity and level and quantity as what I would have been doing as I did preparing for my title fight.” 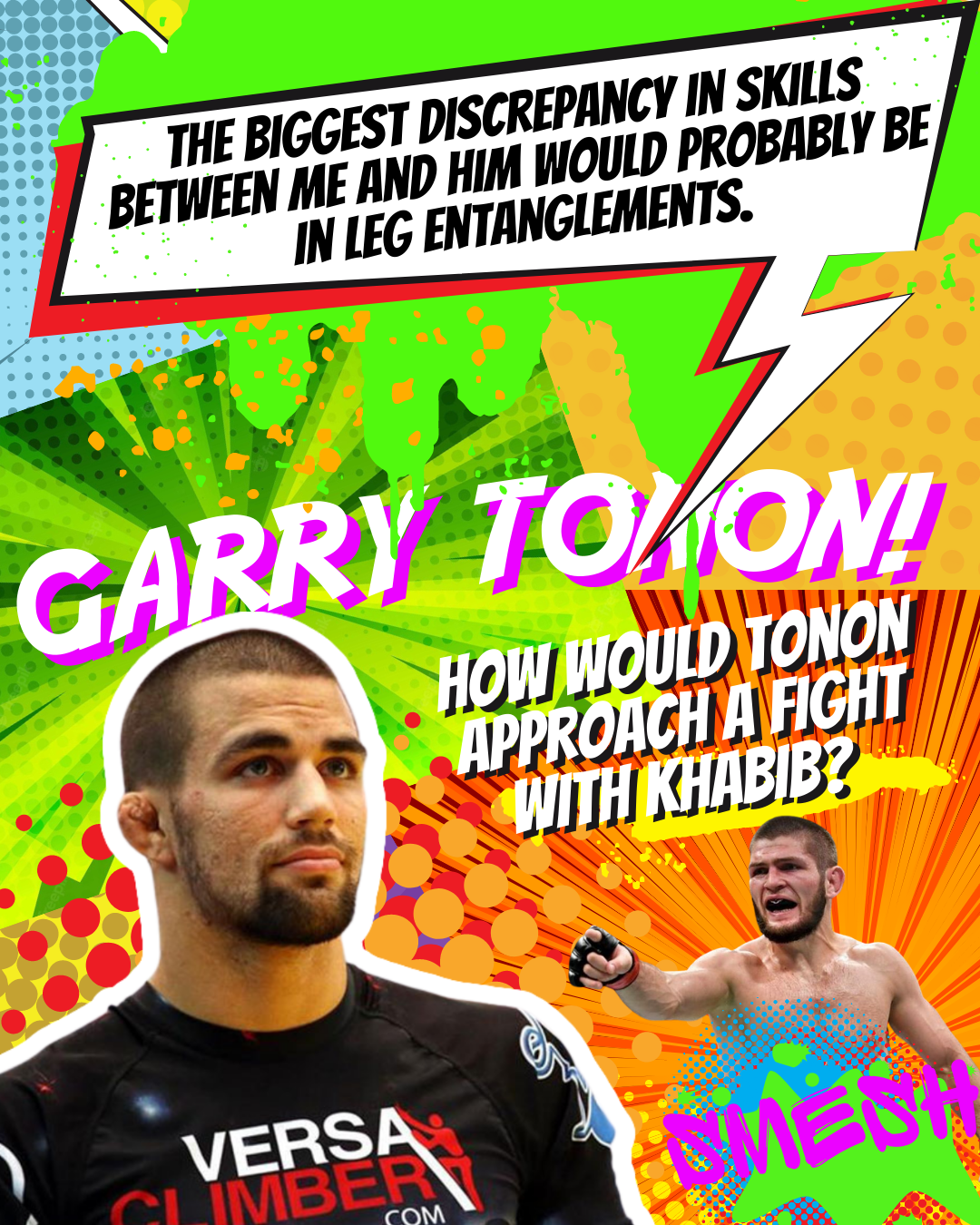 The biggest enigma in all of mixed martial arts is the path to victory against Khabib Nurmagomedov. When I asked the question, Tonon’s eyes lit up with the excitement of breaking down the hypothetical matchup between he and Khabib. With Tonon being just as much of a ground specialist as Khabib in his own way, it is a fun match to think about.

Off the bat, Tonon lays out the problem with existing game plans brought to Khabib in his best fights. The idea has always been to knock him out. Tonon, however, points out that that path to victory was fruitless and it wasn’t a lack for trying.

“It’s funny that people’s answer is to knock him out. But not too many people were able to do that, we’re they?” Gary Tonon said laughing. “It’s easier said than done. They’re like, ‘Aw man, striking is his kryptonite.’ Maybe he’s not the greatest striker but he understands enough to nullify other great strikers to the point where it’s difficult to do the damage that they would do to other people. And that in itself is a quality that makes it knocking him out is not the easy answer. I’m sure that’s how McGregor felt like, “Aw yeah, he sucks at striking so I’m going to beat his ass.”

Contrary to what Justin Gaethje, Conor McGregor, and Dustin Poirier thought in Khabib’s last three fights, it is the ground game where Tonon thinks that he has the best shot at beating Khabib. But there is always the issue of the size that Khabib brings to a fight.

“There is all these other things that comes with Khabib’s game that changes things quite a bit. As far as from a grappling perspective, a couple things. One: he’s considerably bigger than me. But that’s not too different from a lot of the opponents I’ve had in the past. That’s something that I have to deal with, the strength and physicality are definitely a little bit of an issue. That would be a storm that would be somewhat more difficult to weather but it’s not something that I haven’t done before. Some aspects of what he does play into a dangerous submission grappler’s game because anybody who is willing to push forward and engage in body to body contact is going to make it easier for somebody who is a submissions expert to get those submissions off. The hardest person to grapple is somebody who doesn’t want to grapple.”

With all that laid out, Tonon goes on and says that if Khabib were to find his way in the ring or cage with him, he welcomes the grappling and he believes he knows what he is getting into.

“He wants to grapple. It’s not like Khabib doesn’t want to grapple. He just wants to grapple in a little bit of a different way that I want to grapple. He would prefer to grapple in a way that he can punch me in the face and he usually uses submissions as an icing on the cake more than he uses them as a bread and butter. Submissions to him are like not that I’ve battered your face for fu*king three rounds and then give up your arm or your neck then maybe I’ll submit you or maybe I’ll keep punching your face.”

So should you shoot the takedown and get Khabib on his back? At the level that he’s at, Tonon doesn’t believe that it’s top pressure that would beat Khabib either. At that level, Khabib is bound to be good on his back as well.

“I can’t remember what fight it was but he was on his back for a moment of time and he threw up a triangle or something. You don’t get to see it too often and a lot of people may think that he’s super weak there. I don’t think he’s weak there either. I like to believe that he also has a decent bottom game. I don’t think that’s necessarily a hole there either.”

So that leaves the best option to be something that Garry Tonon is immensely advanced at: leg entanglements. Tonon welcomes the wrestling, as he already said and thinks that there are some opportunities for him to get in on the legs as Khabib pursues the takedown.

Don’t miss the event as Garry Tonon and Tye Ruotolo are set to face off at ONE 157. In addition to that, you’ll get matches featuring fighters like Petchmorakot, Rodtang, and Jonathan Haggerty. It’s something you don’t want to miss.

By Laura Kent 1 month ago