UPDATE:  Hearing as of 8:13 p.m. EST on Sep. 4 that the young boy has passed away.  Thoughts and prayers with the Kowal family.

The infant son of professional mixed martial artist Marcus Kowal is in critical condition after being struck by a drunk driver yesterday afternoon.

According to a press release from the Hawthorne Police Department:

“On September 3rd, 2016 at approximately 4:15 pm, Hawthorne Police Department officers were dispatch to the instersection of 133rd street and Hawthorne Blvd in regards to a vehicle verse pedestrian traffic collision. Hawthorne Patrol Officers responded to the scene where they located two injured juveniles lying in the street near the crosswalk. One of the victims, a 15 year old female, was suffering from what appeared to be leg injuries while a second victim, a 15 month old baby still in its baby stroller, was found pulseless and not breathing. Officers administered CPR to the critically injured baby while awaiting the arrival of LA Count Fire rescue units. Arriving rescue personnel took over the treatment of both victims and transported them to Harbor UCLA Medical Center. The 15 year old female is reported to be in stable condition while the baby is in ICU.

The Hawthorne Police Department Traffic Bureau responded to the scene to conduct its investigation. During the course of the investigation it was determined that the 15 year old female was pushing a baby stroller inside the crosswalk when a SUV, driven by a 72 year old female later identified as Donna Marie Higgins, drove through the crosswalk striking both victims. The driver of the SUV then fled the scene northbound followed by witnesses to the crash. The witnesses followed Higgins for about a block before they were able to block Higgins’ vehicle with their own cars until police arrived on scene.

As part of our standard protocol in a crash of this nature, field sobriety tests were administered to Higgins. Following the investigation, it was determined that Higgins was driving a vehicle while intoxicated and she was placed under arrest for felony hit and run as well as felony drunk driving. Higgins was booked into Hawthorne jail on the above charges with a $100,000 bail.”

Kowal began his martial arts journey through Karate and Aikido while still a young teenager and became well-versed in multiple disciplines, winning the K2 World Title in kickboxing in 2002 and placing second in both the 2004 Golden Gloves and 2005 Title Boxing World Championships.  After studying under Rickson Gracie, Rafael Cordeiro, and UFC heavyweight champion Fabricio Werdum, he made his professional MMA debut in 2009 and was competing for major promotions, including Strikeforce, shortly thereafter.

Kowal (3-1-1) in MMA serves as the Lead MMA Training Instructor and Owner of Systems Training Center as well as the CEO and Co-Founder of Fitnesscenter.com. In addition, he is the Host and MMA specialist for StudioMMA and MMANytt.

Scene of the Accident Below: 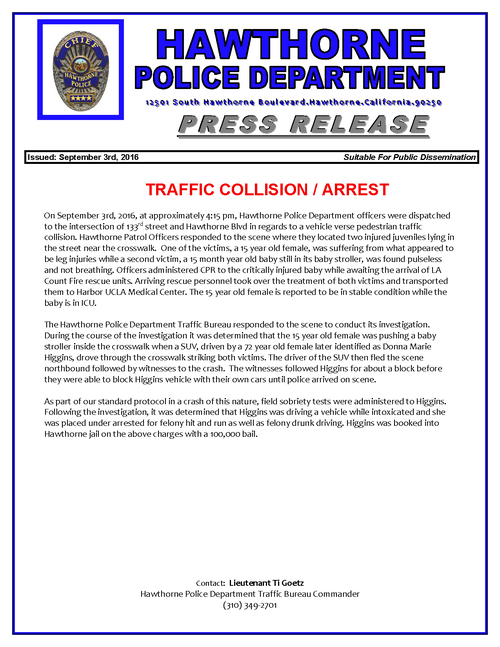