Jake Paul…has defeated Anderson Silva. The pain that went through my body to type that sentence was actually pretty rough. But as a society we need to get through our pain and better ourselves for it. Jake Paul is now 6-0 and has beat up 3 MMA champions (we can count Askren as a Bellator and ONE champion, I guess. So today, we have to do Aftermath, as much as it pains me to do so.

Anderson Silva: Didn’t Do Anything We Talked About

Leading up to the fight, I wrote about Anderson Silva and his southpaw stance being a key to this fight. In that article (I recommenced you read it, it’s still good information. Link at the bottom of the article), we broke down how in the southpaw versus orthodox matchup, two fighters have some different opportunities for offense and defense. Specifically, we talked about the battle of the lead hands and pivoting away from the power hand to create angles and avoid a disastrous shot. In the fight with Jake Paul, Anderson Silva did precisely zero of that and opted to pressure and square up with the younger, faster, and stronger fighter.

While Anderson Silva wasn’t a complete disaster against Paul, some of the things he did could have been better from a boxing standpoint. He fought like an MMA fighter, and it showed. In the first round, Silva threw away a point and took the round to get his bearings against Paul. That’s all fair but in hindsight, a little more activity that round could have done him well.

One of the things Silva does in the boxing ring that drives me absolutely crazy is squaring up with his opponent. Eventually it will get him caught, and it did against Paul. It was that squaring up that saw Silva knocked down in round eight. As cliche and corny as it sounds, balance is actually important in fights. In the knockdown, which we will break down in the next section, Silva squares up with Paul, not pivoting away from the power hand, and gets caught with a jab and tries to avoid the right by leaning back, all while being grazed. It caused the knockdown and truly threw the fight away for Anderson Silva. The round becoming a 10-8 was too big a deficit and he was already behind on the score cards.

Silva did, however, test Jake Paul in ways he’d not been tested before. In the past, the only real fighter to pressure him was Nate Robinson and he walked right into a counter cross that put him away. My thoughts on Paul were what happens when a striker who will not walk onto punches consistently pressures him. Paul showed that he’s improved since his last decision against Woodley and the gas tank is improved for sure. But Silva pressured, rolled with punches, threw a variety of strikes, including a very effective uppercut in the clinch.

While he didn’t fight a picture-perfect southpaw fight, did we truly expect Anderson Silva to do so? He’s been the master of unorthodox techniques for a couple decades now and changing him now would be a monster task that’s borderline impossible. Silva is just the latest retired MMA fighter to fall to Jake Paul. It hurts, but Paul is here to stay.

I think that’s my favorite nickname for Jake Paul: the Bastard Son of Boxing. Nobody likes him. Nobody thinks he’s good. But everyone watches. Spoiler alert: Jake Paul is getting pretty good at the sweet science. His win over Anderson Silva is the highest level win he’s got to date and Silva truly had boxing experience. Paul showed up and showed out against a tough opponent who is unorthodox and brought a ton of new looks.

The first thing that stood out to me against Anderson Silva was Paul’s performance while tired. From early in the fight, Silva pushed Paul backwards most of the fight. In the first Woodley fight, Paul was hurt, he was tired, and it showed later in the fight. In the first fight with Tyron Woodley, Paul was gassed and basically crab walked backwards. Against Silva, which is over a year later, Paul kept his base for much of the fight and was defensively improved. I won’t say he’s good at being a defensive boxer but having picked this up four to five years ago, it’s safe to say Jake Paul has improved in all facets of boxing.

From the beginning of the fight, Jake Paul was very concerned with the body of Anderson Silva. He threw jabs to the older fighter’s mid-section, often landing them. This worked wonders for Paul as Silva, who came out into round two piping hot and putting on a lot of the pressure. Silva obviously wanted to keep his foot on the gas but a combination of the body shots and his age, Anderson Silva let Jake Paul get in a groove.

Paul eventually discovered changing levels on his hooks as Anderson Silva was more and more inclined to stay in the pocket with him out of exhaustion. He’d throw two hooks down low and a hook up top that landed a couple times on the experienced fighter.

I would have liked to see Paul target the lead hook to the body more but doing so against an opponent who is constantly pressuring you early on is a tough task. In a southpaw versus orthodox matchup, the southpaw has a disadvantage that the orthodox fighter doesn’t particularly need to worry about. The liver for a southpaw is in the front of the fighter and a good lead hook to the body can cripple and even put away opponents. We see Ryan Garcia utilize this well against his southpaw opponents. 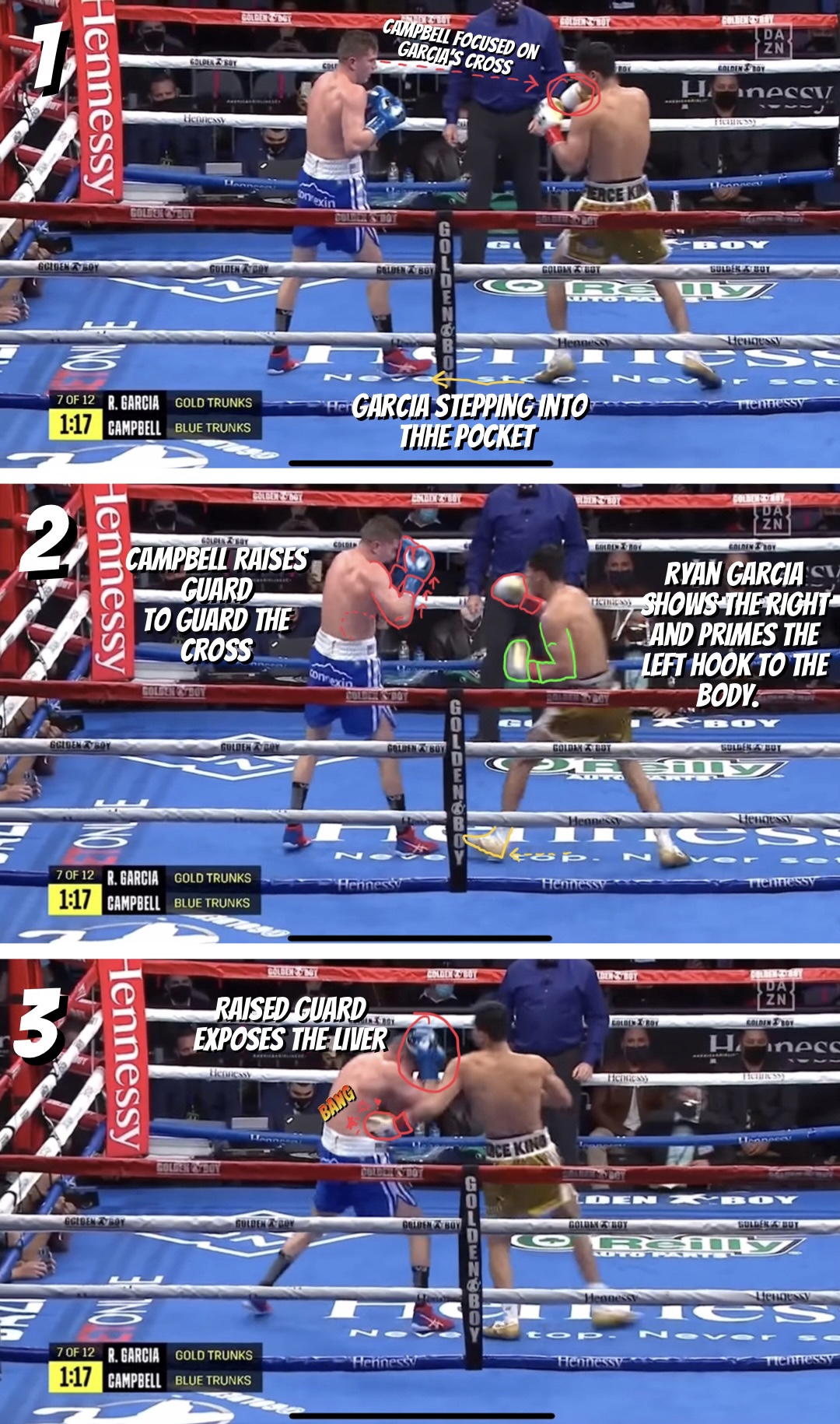 In figure one above, we are looking at Ryan Garcia’s fight with Olympic silver medalist Luke Campbell. In frame 1, (1) Campbell is looking at the right hand of Garcia as Garcia steps into the pocket to exchange. Garcia purposely shows Campbell the right to get him to raise his guard and expose his liver. (2) You can see here on a southpaw fighter; the liver is at the front of the body. With Garcia showing Luke Campbell the right, his guard is up, and Garcia reads this as he comes in. As he’s showing the right cross, he’s primed up the lead left hook to the body. (3) With Campbell expecting the cross, the left lands clean and Campbell goes down to a knee for the count.

Paul could have utilized this, albeit exposing his own chin if he’s not as fast as Garcia (he’s not). This could have crippled the body and the gas tank and even possibly given Paul another knockdown.

The knockdown in the eighth round will make Jake Paul a better fighter. Having a tough fight and digging deep down to get the knockdown to seal the deal is a classic trope we see in a boxer’s career. Paul knows he can dig deep in the last round of a fight and deal out punishment. That will help him handsomely in his future fights.

But the knockdown wasn’t a huge knockout blow that Silva managed to survive. Paul was coming closer to this type of knockdown as Silva abandoned a boxing stance and stayed square with Paul, losing his base of balance and power. Paul, instead, stood in the pocket and caught Silva with a good shot that sent him tumbling to the mat. Let’s take a closer look. 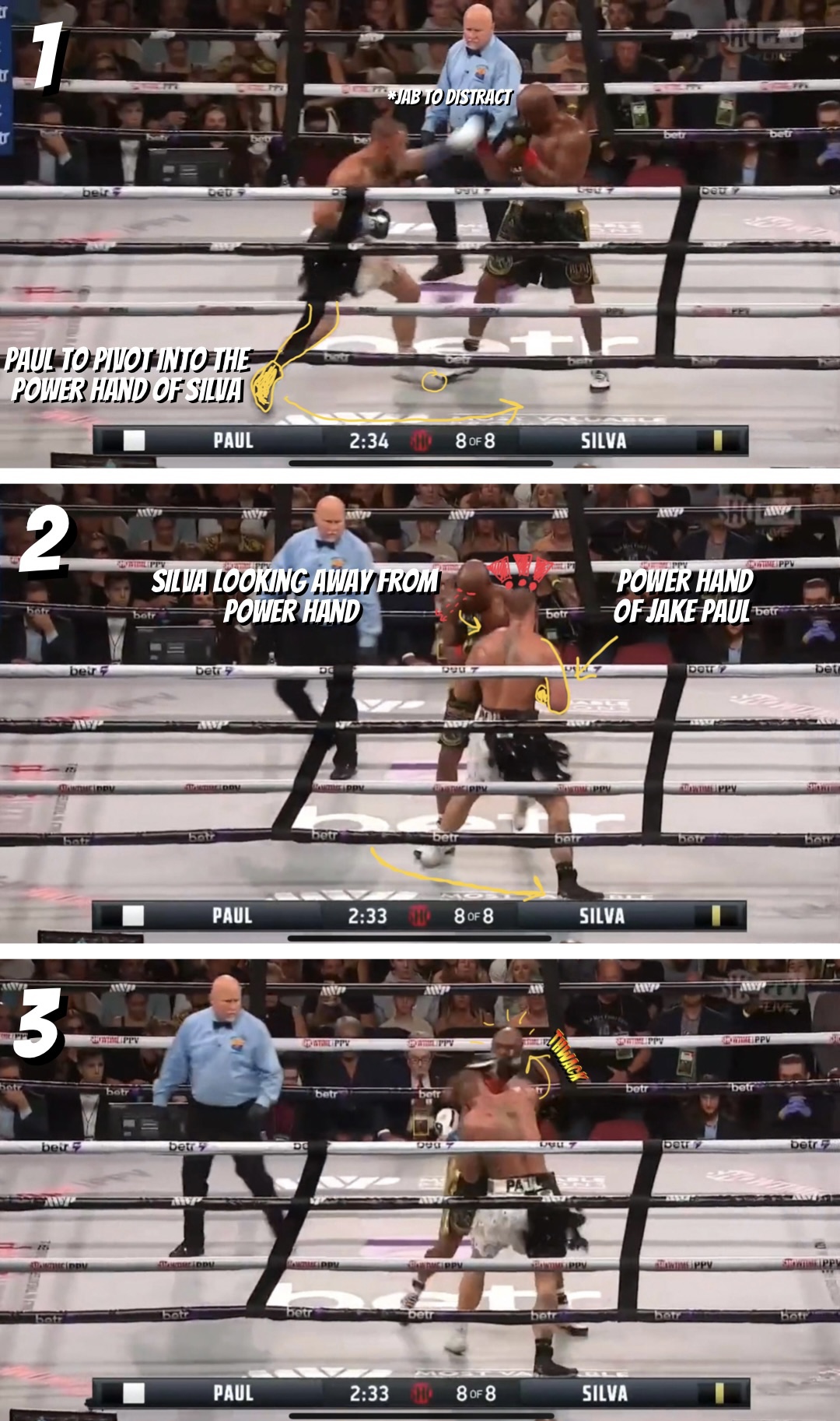 In the second figure above, we can see how Jake Paul set up the knockdown in round 8, sealing the deal for the fight and knocking down the MMA legend. (1) Silva is applying forward pressure to Paul as he’s done all fight. Paul will look to pivot to his right and to get through the power hand of Silva, he throws a jab to distract Silva. Once he’s pivoted out, (2) Jake Paul is looking to get some respect and get Silva to back off of him. Fortunately for Jake Paul, Anderson Silva is not looking at him and is looking away from the power hand of Paul. With Silva looking away, the right is lined up and Paul (3) lands it cleanly, and will send Anderson Silva down for the count.

But it wasn’t really the power of Jake Paul that sent Anderson Silva down. Silva made his own mistakes that led to the knockdown. But that’s not to take credit away from Paul, he set Silva up and walked him on to the punch quite nicely. He capitalized on Silva’s mistake and that’s what’s at the heart of boxing. 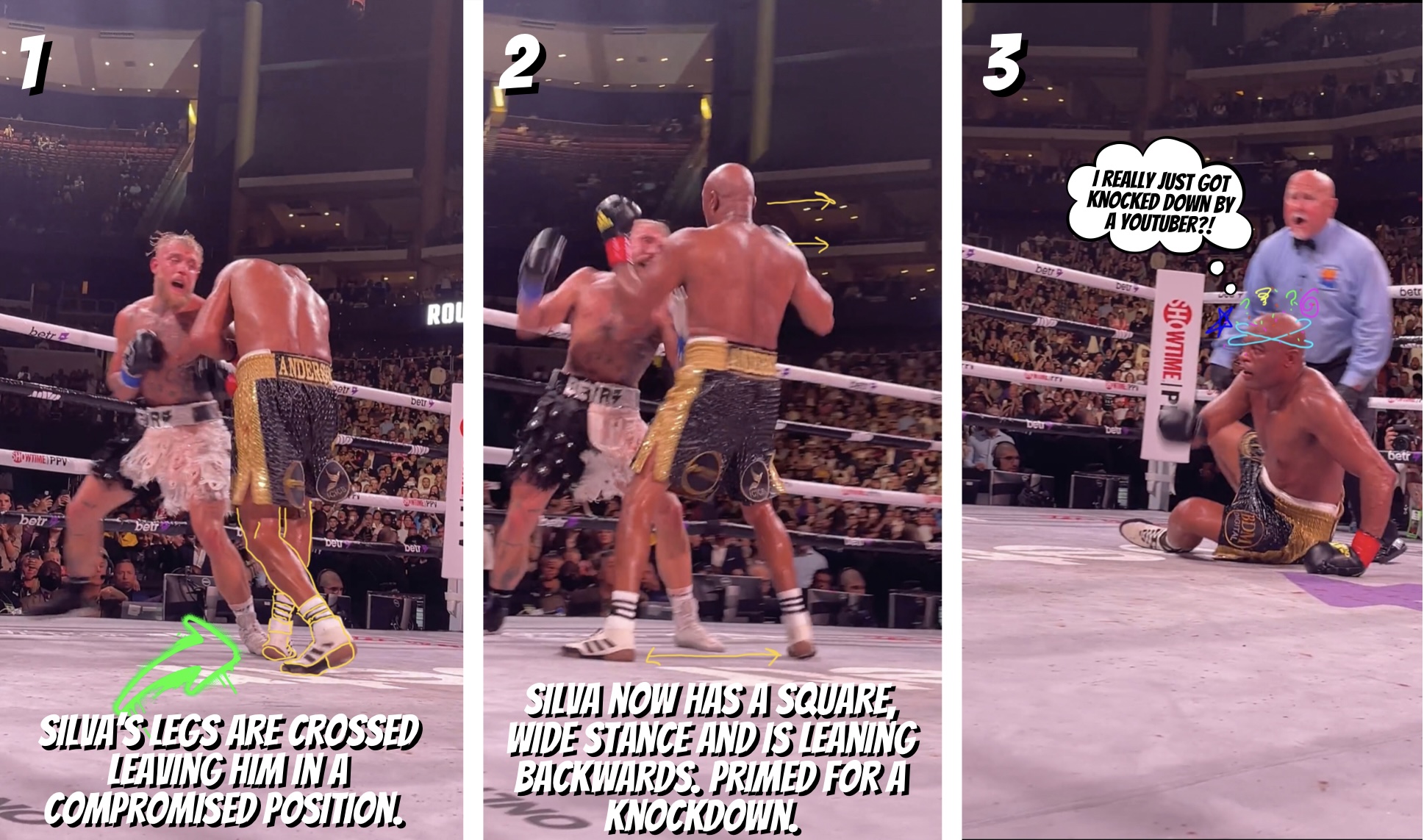 In the final diagram, we see just what went wrong for Anderson Silva in an alternative viewpoint. (1) In the first still, Paul has already pivoted into the power hand of Anderson Silva. But we see the first crucial mistake: Silva has crossed his feet instead of taking small steps to correct his foot position. Because of this, he over-compensates with his back foot and steps out too wide, squaring up and leaning slightly back due to the jab and oncoming cross that he picks up on too late. This was the perfect recipe for disaster. The cross from Paul does just enough and (3) Anderson Silva is wondering how a YouTuber put him on the mat.

All in all, I’m impressed, once again, with the improvement of Jake Paul. He went out and did what he needed to do to get the win. While he’s not a tier one boxer, he’s very obviously taking it seriously. With wins over Ben Askren, Tyron Woodley, and now Anderson Silva, one’s here to wonder, will Nate Diaz, who looked terrible against Tony Ferguson, actually stand a chance? That’s not really a fight I want to see now.

Check out the previously mentioned article exploring the southpaw vs. orthodox matchup below!

Caught In A Web: Anderson Silva vs. Jake Paul