The rematch comes on short notice as Paul saw his original opponent, Tommy Fury, pulled out due to a broken rib. Stepping in is Paul’s previous opponent, Tyron Woodley. The two last fought in August of which Paul won via unanimous decision.

Of course Tommy Fury fumbled the bag as Jake Paul let him know in the face off with Woodley. Now, Paul has a $500,000 knockout offer to stop any questions about there being a no knockout clause in the contract. 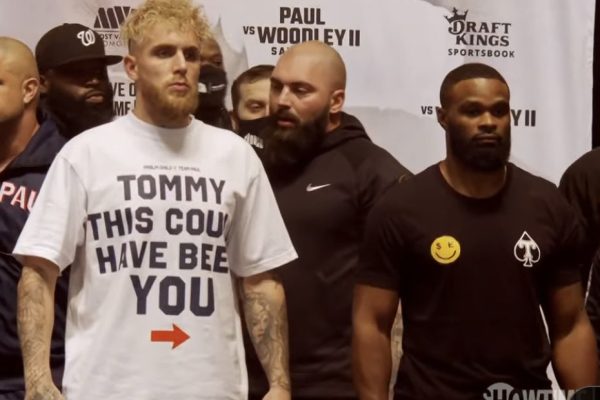 Woodley made his debut against Jake Paul after being the former UFC champion. He looks for redemption after rocking Paul in their first fight but not pulling the trigger enough and let Paul get away with a decision.

Paul looks to continue to hold boxing purists hostage and win his fifth boxing match as a professional. He and his brother, Jake, have come over to the sport and made a killing in cash to the dismay of those who want to keep the sport pure. But the Paul brothers keep gathering eyes to tune in. While this fight may not be the pay per view blockbuster, it can and likely will be attributed to the change in opponent.

Who do you have winning tonight? Paul or Woodley?

Stay posted to My MMA News for all the latest news surrounding Jake Paul, Tyron Woodley and boxing. Thanks for reading!