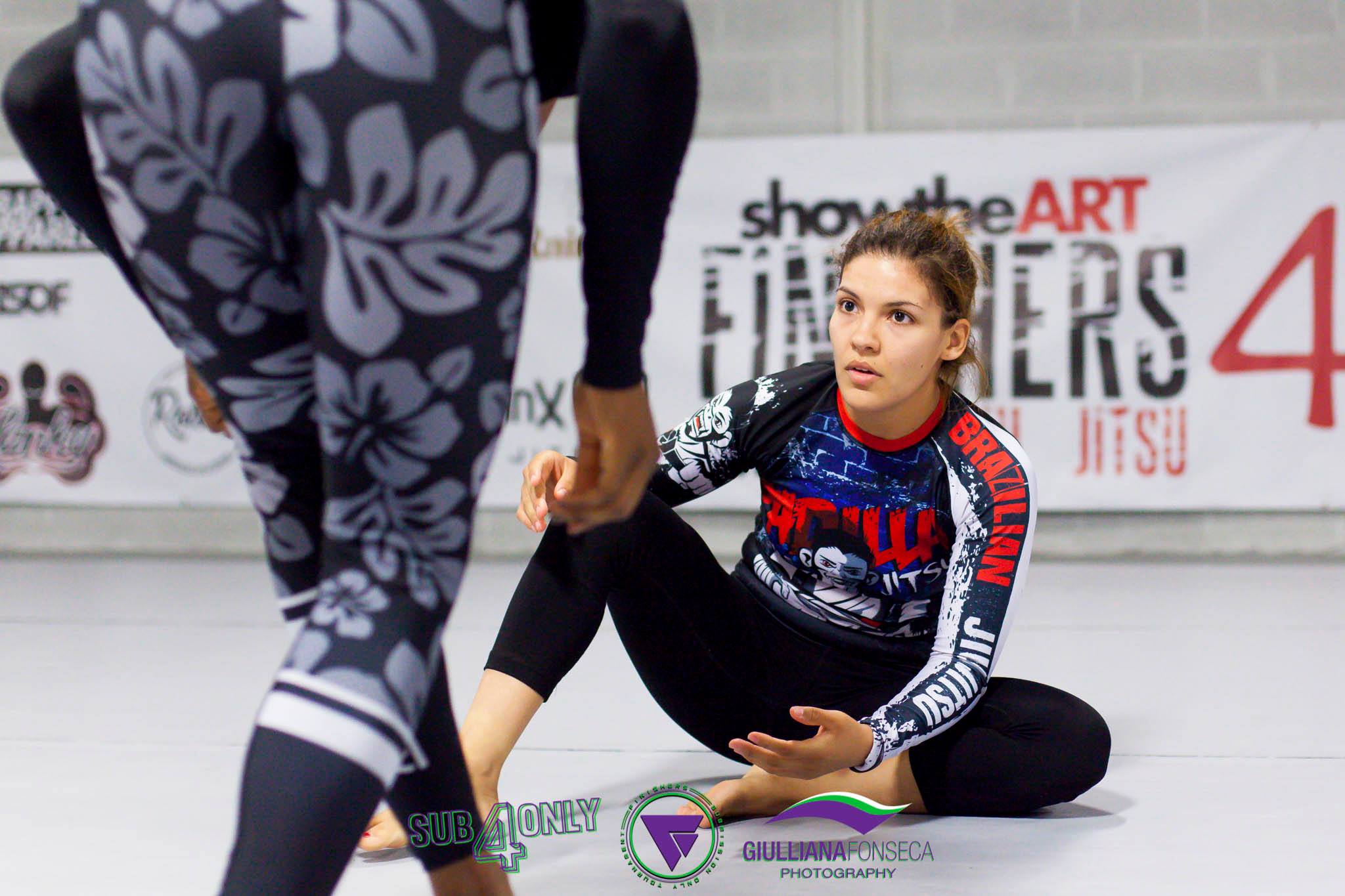 Turning 27 years old today, Jess Feliciano of Padilla BJJ has only just hit her 3 year anniversary of training jiu jitsu this month.  If you watch the EBI 16 countdown video, you’ll hear some of the other competitors talk about how they’ve been training for 10 years or more, and quite a few have been training since they were children.  Just looking at experience alone, the odds seem to be stacked against this Padilla BJJ stand out, but Feliciano has the type of intense drive and passion for training that has allowed her to earn her purple belt in under three years.  Even as an underdog, Jess looks to the first all female EBI for inspiration.  Erin Blanchfield, the EBI 12 champion, came into the tournament largely unknown and made waves with upset after upset until she took home the belt.  Feliciano plans to do the same and is not looking for the easy way out.  After all, she said, “if she can do it, why can’t I?”  She wants to test herself against the best and is hoping to get matched up with a black belt the first round.

Jess’s relationship with her coach, Mike Padilla, has played a large part in her development and she looks at competing as representing her team and Padilla’s name when she goes out there.  Padilla is an EBI veteran himself and teaches all of his students to look for the submission, regardless of what rule set they are competing under.  He has pushed her at times and has inspired her to keep working even in the moments where she feels like giving up, which is usually where the real progress is made.  Not only will Padilla teach his regular class a move, but he will also show Jess specific variations of the class move to help her with her game.  They regularly work on leg locks together and Jess has become known for her slick leg attacks, picking up two submissions by way of leg lock on the way to the finals of the Finishers Sub Only 4.  The Finishers Sub Only is the east coast’s most popular EBI rule event, and the Finishers 4 was the first time they included an all-female tournament.

She also got the crowd roaring in her only match that went to overtime when she repeatedly hit some extremely impressive hitchhiker escapes out of spiderweb control.

Feliciano has also graced the Fight to Win Pro stage, taking two fights in one night when one of the competitors had last minute visa issues and had to drop out.  Padilla also competed on that card alongside his student, and their mutual drive to excel in competition is one of the reasons why Jess has become one of his favorite students.  Jess is always game to compete against anyone, which really showed when she stepped up in weight at the Finishers Sub Only 4 that included ladies up to 150 pounds.  Competing at 135 pounds now on the EBI 16 stage should be much closer to her regular competition weight.

Working full time as a patient care technician (PCT), Jess puts in long hours working overnight at Christiana Care Wilmington Hospital.  Oftentimes people struggle with working overnight shifts due to the required sleep adjustment, but she simply says she takes a lot of naps and still somehow manages to train before work and lift weights in the morning after her shift is complete.  A lot of the competitors on EBI 16 have the luxury of being able to spend their whole day training and not having to work a regular job, but it just goes to show how strong Jess’s work ethic is that she manages to work overnight shifts and still maintain her training.  This will surely be a step up in competition for her but she is looking for that upset and has a “kill or be killed” mindset going into this tournament.  Check out some of her training and what she had to say about the event in the preview below.