Johnny Walker is ready to beat someone up.

The Brazilian last fought nine months ago, recovering from surgery on his torn left pectoral muscle. The 29-year-old tore the tendon right off the bone while bench pressing in the gym.

Closing in on his final days of physical therapy, Walker is slated to headline against No. 4 ranked light-heavyweight Thiago Santos at UFC event on Oct. 4. Walker never really rested during this time, constantly lifting weights and training.

The 205-pound contender is relieved to be back at 100 percent.

“It is what it is, the surgery delayed my career, but I’m here and back on track,” Walker said.

“Hope I can climb to the top of the rankings, beat the shit of these fools and get the [expletive] belt around my waist soon.”

Walker still found ways to train with a left pectoral muscle even if his left arm was in a sling. The SBG Ireland product is looking to climb the rankings following a first-round knockout of Ryan Spann last September.

He was slated to return to the octagon against No. 14 Jimmy Crute in March, but Walker pulled out due to his injury.

Walker is walking around 245 pound after putting on muscle from weight training. He is already working on his diet to bring his weight down.

Although he spent time outside of the cage, he never lost focus on his goals inside the octagon.

“I am already on a good diet and my weight is coming down nicely. My metabolism is very high, so it is not hard to manage,” Walker said. “I am just happy to be back, just concentrating on training hard, test myself with this fighter.”

Time off, pays off

The wait is worth it for Walker. He is receiving a much higher ranked opponent in Santos, who is currently pegged in the top five of the division. Crute is ranked behind Walker, who is No. 10.

A win over Santos can only help Walker’s case for a top five spot. Santos is on a three-fight skid, which started with a split decision loss to former champion Jon Jones at UFC 239 in July 2019.

He suffered a third-round submission loss to Glover Teixeira last November and most recently dropped a decision to Alexander Rakic at UFC 259 this past March.

Walker won one of his last three bouts, but is confident he can beat the former title challenger.

“I’m happy with what happened, I have a better opponent now who has a better place in the rankings,” Walker said. “I just have to be careful, hands up, chin down, move around, don’t give him a chance and beat the [expletive] out of him.” 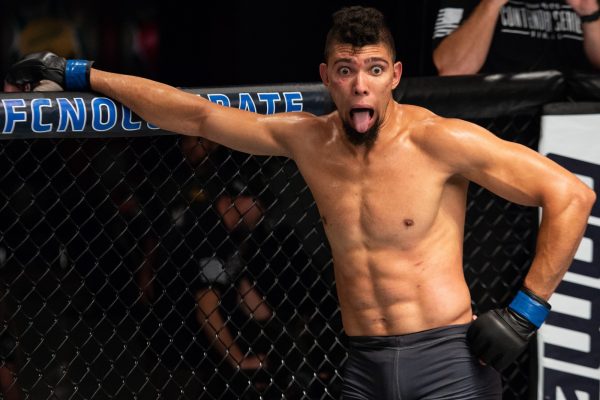 Walker is ready to climb

Walker claims he is back to feeling 100 percent. Fighting someone of Santos’ caliber is exactly what Walker is looking for.

He never lost his hunger during the layoff and expect that to show in his fight on Oct. 2. Santos is an opportunity to propel Walker to a higher spot in the rankings.

Walker is  just glad to be back no matter who is in front of him. It just happens to be Santos.

“I just want to fight high level guys in the rankings,” Walker said. “I don’t choose my opponent, whoever they put in front of me, I’m going to destroy.”