Julian Williams (27-0-1 16 KOs) is set to defend his WBA, IBF, and IBO World Super Welterweight titles January 18, 2020. He is set to take on Jieson Rosario (19-1-1 13 KOs) at the Liacouras Center in Philadelphia, Pennsylvania. The fighters and their teams held a press conference addressing several topics before the fight.

Julian Williams has had a tough road leading up to his title reign. He lost his first bid at a world title to Jermall Charlo by a knockout, his only career loss.

“It took a lot for us to get the title. We had some bumps in the road. But me and my team, we just kept battling and fighting through. We finally got our breakthrough fight and got the titles, and we wanted to bring the titles right back to Philadelphia. It’s amazing to have this opportunity to come back home and perform in front of my home crowd.”

While Bakhram Murtazaliev won his fight against Jorge Fortea for mandatory challenger for Williams, Julian Williams and his team decides to go with Rosario for other reasons.

“Rosario is a really good fighter and I’m not just saying that. They’ve been matching him tough and he’s been coming through fights he wasn’t supposed to win. I’m expecting a really tough fight and for him to be in shape. He’s got 36 minutes to change his life forever. I was in his exact same position very recently. It would be extremely arrogant for me to think I can’t lose.”

As for his training camp, Williams is working hard like the world has become accustomed to him doing. He says, “I’ve been training hard like I always do. I’m in extremely great shape. On January 18, I’m going to win. I don’t know how, but I’m going to come out on top.”

Fighting at home hasn’t really dawned on Julian Williams, although. “I haven’t actually thought about fight night and what it will feel like,” says Williams. “I can only imagine it will be amazing seeing the people who have watched me fight since I was a teenager. I’m pretty sure as it gets closer to the fight, I’ll start thinking about it and it will give me an extra push in camp.”

Williams isn’t letting his lone loss hurt his mindset. He says the way of the “0” in boxing isn’t really that great and that good boxing is simply good boxing.

“Our approach is not like the new age way. This is the microwave era, everything’s got be quick and glossy, but that’s not the way boxing is supposed to be. In this era there’s a lot of pressure to be undefeated and act a certain way. But we see boxing as just like life. Sometimes you win and sometimes you lose and we just take it all in stride.”

Williams is preparing for a fight. Being a student of the game, he feels like he is prepared for Rosario, having been in that position before

“I watch a lot of boxing so I’ve seen this run that Rosario is on and I’ve seen his loss. He’s been on a good streak so I immediately knew this would be a good fight. I know he’s going to try to come and take my belts.”

The reason Julian Williams feels that way about Rosario is because he was in that same position last May when he won the belts for himself.

“I can see the look in his eye and it reminds me of the look I had in my eye earlier this year against Hurd. I know he’s got a game plan to beat me, so I have to be fully prepared.”

Jeison Rosario And Thr Opportunity Of A Lifetime

Jeison Rosario knows he has an opportunity to change his life with Williams. Being able to test his skills against such a great boxer is the ultimate compliment.

“I’m excited to have this fight and thankful to Julian Williams for giving me this opportunity of a lifetime. He’s the best 154-pounder in the world but we’re coming January 18 to take the titles back home to the Dominican Republic.”

Rosario and his team want to make a fight to remember for fans going into this fight. “We’re working hard to put on a great fight and we want everyone who watches this fight to get their money’s worth. We’re going to scrap it out all the way through.”

Going into enemy territory is what Rosario thrives on. “Philadelphia is known for tough fighters and tough fights and we’re going to give them more of that on January 18. We’re not going to leave anyone disappointed who watches this fight.”

Rosario’s life has led up to this one moment. He knows he may not get another chance at a world title so he’s ready to seize this opportunity and make the most of all his hard work.

“This fight means everything to me. Ever since a kid I’ve been fighting. All of those years combine to one night on January 18. We’re preparing very well to take advantage of the moment. This all started when I was eight-years-old and I can’t wait to get in the ring.”

Just as Julian Williams thinks the undefeated schtick needs to go, Rosario concurs. He says it’s because of his loss that got him to this moment.

“The loss that I had made it so that I can stand here right now. It made me realize what I needed to do. I had the skills, but I had to learn the work ethic. I learned what I was supposed to do and how I was supposed to be training.“

He continues, “My loss was really a blessing. If I had never lost, I would have never trained the way that I am now and I wouldn’t be the fighter that I am today. I’m just getting better and I’ll be at my absolute best on fight night.

Now, Jeison Rosario looks to put a cap on the fairy tale-esque career he’s had thus far. “On January 18, it’s going to be like a ‘Rocky’ movie, we’re going to scrap it out from start to finish. I’m going to end up as the new Rocky in Philadelphia that night.”

Edwards and Williams both believe they owe it to the fans for making Williams a champion. He said, “We finally made it back home with the title after we had to go on the road to get it. A lot of people didn’t think we’d come back with it, but Julian took care of business. It was a big deal for us to get a chance to return back home and give our fans who have supported Julian a chance to see him live and in person.

As far as his training of the champ, Edwards thinks they have the jump on Rosario and his camp. “I think it’s going to be a really good fight. We’ve been watching Rosario for a while. They might think they’re sneaking up on us, but they’re not. He’s a really good fighter with some really good victories. We don’t believe in underdogs, because when two men get in the ring anyone can win.”

After winning the belts from Hurd, Edwards couldn’t be more proud of his fighter and friend. While he knows Rosario is coming to fight, he feels confident that Julian Williams is ready to put on a show.

“I’m really proud of what Julian did and I think he’s going to put on a great performance on January 18 and I expect Jeison to come to fight as well.”

While he respects Rosario, Edwards thinks he has the best 154er on the planet. “I think Julian is the best 154-pounder in the world. So there aren’t any opponents I think Julian couldn’t handle. Rosario hit the lottery. Julian is better when he feels threatened, so I know that he’s going to train hard and do everything he needs to do.”

As Rosario was greatful, Luis Perez was as well for being given this opportunity.

“The people in Philadelphia have been very nice and we’re happy to be here. We worked very hard to get to this position and earn this opportunity. Most of all, we want to thank Julian for giving us the fight. We appreciate it and we have a lot of respect for him.”

Perez knows Rosario has been overlooked. But, much like Williams did to win the belts, Perez expects Rosario to do the same.

Everything is on the line for Jeison Rosario when he fights for the belt. Perez has his fighter training for just that and intends to leave everything in the ring.

“We’re training hard for a great fighter like Williams. We’re going to leave it all on the line. We won’t leave January 18 saying what we could have done better. We’re doing everything in our power to give the best performance.”

“We think Julian is the best fighter in the division and we embrace the positon we’re in. It’s going to be a great fight for the city of Philadelphia because we always come to fight.” 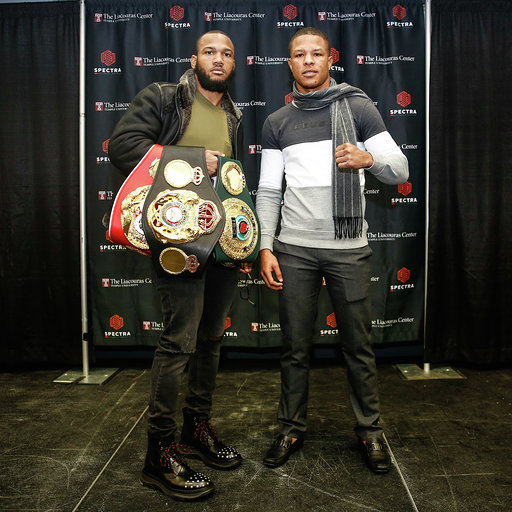 Bob Arum disagrees with Dana White going on with UFC 249

Matchroom Boxing Postpones All Fights Through May

By Matt Bricker 6 days ago