Julianna Pena is hoping a victory on Saturday night will get her the next shot at the “12 pounds of gold.” 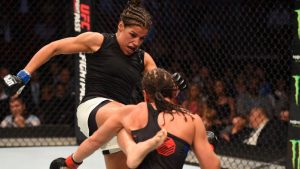 Julianna Pena is undefeated in the UFC octagon since she joined season 18 of The Ultimate Fighter reality show. In her mind, as well as many of the fans of the UFC, she has done everything she has needed to do to earn a shot at Amanda Nunes and the UFC Women’s bantamweight title.

As we all know, Ronda Rousey got that shot at UFC 207 and was stopped in just 48 seconds by the champion.

Pena (9-2 MMA, 4-0 UFC) has been very vocal about being passed over for a shot at the title. After her latest appearance inside the octagon, a unanimous decision victory over Cat Zingano at UFC 200, it seemed like a forgone conclusion that she would be next in line. For Pena, the time for being vocal is over, the time to fight is now.

Now being this Saturday night in the main event of UFC on Fox 23. The event takes place from the Pepsi Center in Denver, Colorado, the city the held the first a little more than 23 years ago. Pena, the UFC’s #2 ranked women’s bantamweight, will take on the #1 ranked Valentina Shevchenko.

Shevchenko (13-2 MMA, 2-1 UFC) was 1-1 in 2016, losing to the current champion Amanda Nunes by decision in March at UFC 196, then taking a decision of her own against former champion Holly Holm in July, setting up this potential title shot eliminator main event. Shevchenko may not have that zero in the “L” column like her opponent, but Julianna Pena is quite aware of the credentials the #1 contender has earned.

YOU CAN LISTEN TO THE INTERVIEW BELOW; JULIANNA JOINS AROUND 21:40

“Shevchenko is a very decorated world-class fighter, and I definitely think she’s worthy to be in this fight with me,” Pena said while appearing on the SFLC Podcast. “She’s a very tough girl, she’s a blackbelt in judo, and she’s a 17-time Muay Thai world champion. I mean, at this point in the game, especially looking at the Top 5 and her being ranked above me as a top 2, all of these girls are extremely dangerous, we’re all hungry, and we’re all looking to get that 12 pounds of gold around our waist. At first, I wasn’t too hyped about the fact that I was getting a ran over and overlooked for a title shot, but at the end of the day, this is the fight that the fans have wanted and this is a fight my employers have wanted me to take, and so I thought I’d step up, be the company girl, and give the fans the fight that they wanted to see, and Shevchenko just happened to be that one.”

Shevchenko had her break out night in the UFC with her win in Chicago over Holm. A fight that Julianna Pena watched very closely.

“I thought it was a great point-sparring match, and I think (Holly) was able to expose some holes in Shevchenko’s game,” Pena said. “She knocked her down once. Unfortunately, Holly doesn’t have the ground skill to follow up after she knocked her down and didn’t want to go to the ground with her, so they just got back up on the feet, started to continue to dance around the ring and whatever it is they do. But at the end of the day, they’re both really great strikers and it’s a mixed-martial-arts fight, and it’s not gonna be a muay thai fight or a karate fight… I just gotta stick to my game plan, stick to what I do best, and trust in my training. That’s what I plan on doing.”

Pena is not just a top ranked UFC fighter, she also is a student of the game. Her complaints about getting passed over for a title shot are warranted. As a student of the game, she realized, from past precedents, that the longer she was vocal and remained inactive, the chances of getting overlooked would continue to increase. Sitting out was no longer the answer. 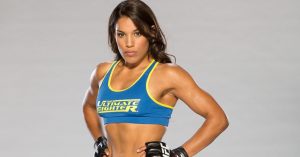 “They know how I feel, they (the UFC) know that I’m upset, they know I feel like I keep getting overlooked,” she said. “There’ were girls that were 0-2 and got shots at the title. There’s girls that beat girls that didn’t get past me on the Ultimate Fighter and beat older, 42-year-old women to get title shots. There’s girls that beat one person or two people and gotten title shots, so obviously my frustration is loud and clear. I’m frustrated, but at the end of the day, there’s nothing I can do about it, and I have to trust the timing in my life. With that being said, I gotta go and get in the cage and fight. Again, I’m gonna do what’s best for me and what’s best for my career, and if they want to see me fight one more time before I get to the title or continue to fight even if I don’t get a title shot, then that’s what I’m going to do. I’m a fighter at the end of the day, and I’m gonna get locked in the cage and fight. That’s how I make my money and that’s how life is as a fighter. Sometimes it sucks and sometimes you gotta do things that you wanna do, but you gotta buck up and take it. (And) Quite honestly, I’m sick of complaining about not getting a title shot, I don’t think anybody cares. I know that the UFC doesn’t care, and so I don’t care anymore. I just wanna fight and that’s all that matters.”

The old cliche in mixed martial arts, “Styles make fights”, is more truth then cliche. There is no secret to Julianna Pena how this matchup will play out stylistically.

“It’s a typical striker versus grappler type of match-up, so we’ll see how that goes, Pena said. “I plan on sticking to my gameplan and doing what I do best, that’s just biting down on my mouthpiece and coming forward the whole time. I’m not gonna change anything up. I know what I can do, and I can do it, and so we’re gonna duke it out, and we’re gonna go get locked in the cage for 25 minutes, and I don’t see it going that long, but if she can drag me down into deep water into 25 minutes of fighting, then bring it on.”

For Pena, this isn’t just a fight that, more than likely, will get her to a shot at the UFC Women’s Bantamweight Champion Amanda Nunes, but this is a fight, a position on the card that she has not experienced before. A main event. A spot she is not taking for granted.

UFC Prospects: Fighters to keep an eye on from the Down Under

By Andrew Sumian 4 hours ago