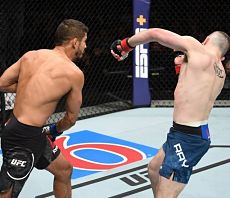 The Ultimate Fighter: Brazil II Champion returns to the octagon this weekend for the first time in over a year, as he takes on promotional newcomer Roman Bogatov. Leonardo Santos has many times shown us he has all the skills in the world to be elite, and despite being 40-years-old, father time hasn’t seemed to pass him, he gets better every time we see him. He returned last June for the first time in two-and-a-half years to take on Stevie Ray, who he defeated via KO (punch) in round one to improve his record to 17-3-1.

The one problem Santos has had, and it’s evident, he doesn’t fight enough. It took him almost a year to return after his UFC debut, he fought twice in 2014 and twice in 2015. His two fights in 2015 showed him submit (rear naked choke) Anthony Rocco Martin in round two, and TKO (punches) Kevin Lee in round one, but after he fought Lee, he was out ten months. He returned to face Adriano Martins, who was 4-1 in the UFC with wins over Islam Makhachev, Rustam Khabilov, and Daron Cruickshank. He defeated Martins via split decision, that was in 2016, then he didn’t fight again until June of last year. 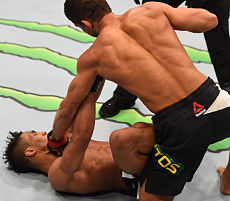 With some consistency, it’s a wonder how Santos wouldn’t be at the top of the lightweight division. He’s a 4th-degree black belt in Brazilian Jiu-Jitsu, and he has some great kickboxing skills as well, he’s a very dangerous match up for really anyone at 155 lbs. Santos went 3-1 on The Ultimate Fighter, defeating Thiago Santos believe it or not, and only losing to Santiago Ponzinibbio. He was awarded Fight of the Season for his efforts against Ponzinibbio, and Ponzinibbio broke his hand in that fight, giving Santos the chance to fight for the crown of The Ultimate Fighter.

Since debuting in the UFC in 2013, Santos has racked up a 6-0-1 record with the promotion, scoring two submissions, two knockouts, and two decision wins. Now he’s scheduled to face M-1 Challenge Lightweight Champion Roman Bogatov at UFC 251, who’s 29-years-old, undefeated at 10-0, and has finished seven of his opponents. This should be a good one!