If you look up the word “fighter” in the dictionary, one of the definitions states that a fighter is, “a person with the will, courage, determination, ability, or disposition to fight, struggle, resist, etc.”

The sport of mixed martial arts, the life of a fighter, and the constant swings of it all, fighting isn’t for everybody. It is, however, for UFC welterweight Matt Brown.

“I’m always excited to get into fights,” Brown said on the SFLC Podcast. “I suppose the opponent doesn’t really matter. I’m always happy to go in there and fight…I like fighting, man, it’s what I do. There’s nothing that makes me happier. ” 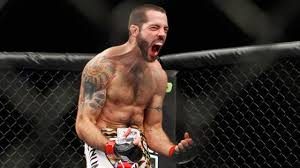 Brown (22-15), ranked #14 in the UFC welterweight division, will take on the #13 ranked Tarec Saffiedine at UFC 207. The event is scheduled for December 30th at the T-Mobile arena in Las Vegas.

Brown’s most recent appearance inside the octagon was in July at UFC 201 from Atlanta, when for the first time in his career, he was finished via strikes by Jake Ellenberger. Like we have seen throughout the exciting career of “The Immortal” Matt Brown, he overcame early adversity. In this particular fight, on this particular night, things were a little bit different.

“I feel like I took it for granted, to be honest with you,” Brown said. “I think that’s all it came down to. Just got a little over-confident with myself and just thought I was invincible that night. Clearly, I wasn’t. I just didn’t show him enough respect. We’ll go back to the drawing board and make sure it doesn’t happen again. That’s all you can really do.”

“That’s always a tough question…you’re always bordering on making excuses, and that’s the last thing I want to do.”

Brown made headlines this week while talking about the aftermath of his loss to Ellenberger. While appearing on The MMA Hour on Monday, Brown was very open and honest about how he felt after a loss he felt was the toughest of his career.

“I dealt with it really tough,” Brown said. “It was a tough one. You know, I probably felt like Ronda Rousey; I wanted to kill myself, which is after every loss, you know, we’re all the same. But you know what, I have three kids and I had to come home and be a role model to them. I had to get up the next morning and make breakfast, and show them that no matter how many times you get taken down, you get your ass up and do it again.”

After a follow-up question from host Ariel Helwani, Brown clarified what he meant.

“Well, my point I guess is that you really do feel like you want to kill yourself,” Brown continued. “You feel like that low of a person. You get beat up like that in front of millions of people, your friends and family. You know, it’s not right to feel that way, and you shouldn’t feel that way, but you do feel that way. I’m fortunately mature enough to be able to handle those feelings and not act on them, obviously, but of course I guess it’s more of an expression that you really do feel that low at that time.”

At the conclusion of that interview, multiple websites titled their articles saying that Brown was suicidal. For those who listened to the interview, Brown admittedly said that he shouldn’t have used that terminology, but he was mature enough to know the difference and not act on it. He released a statement via social media on Wednesday to give further clarification and apologizing for mentioning a serious issue in that way. Brown has been in the fight game and in the UFC for a long time. On Wednesday night, while on the SFLC Podcast, Brown expressed his understanding of media in the sport of mixed martial arts, along with a little bit of disappointment.

“I think that was kind of dirty,” Brown said. “I guess there’s just not the integrity in journalism that I gave it credit for and that’s another lesson to be learned. I’m gonna have to start doing media like I’m speaking to third-graders. I felt like I was being really open and honest with Ariel, I know that’s a big MMA following that he has, a lot of people are going to be listening. In my mind I’m thinking, ideally, I want to be open and honest and try to affect people in some sort of positive way. Give them insight into the feelings of a fighter…When journalists are listening, they are, rather than trying to create a conversation, they’re probably just listening to each line as if it’s going to work for a headline or not. That’s not what I’m about, man. That’s just about the integrity of a man, really. I don’t know man, it kind of bothers me. At the same time, they’re doing their job…I should have known better myself.”

Brown is preparing for his fight against Tarec Saffiedine, on a massive UFC 207 card on December 30th in Las Vegas. Saffiedine (16-5) is 2-2 in his UFC career. Despite his .500 record in the organization, and his streak without a finish in a victory since a 2nd round KO over Nate Moore in May of 2010, Brown is fully aware of how difficult the challenge is ahead of him.

“I think you just haven’t seem him perform up to his level of ability. I think you see how good of a fighter he really is. I think he really shines in the (Nate) Marqaurdt fight,” Brown said of the former Strikeforce Welterweight Champion. “That’s the one that really sticks out in my head. There’s a few that shine even when he doesn’t get the knockout. He’s hurt people pretty good. Just really doesn’t have the tenacity or the power for the finish. He’s an extremely, extremely good fighter. Another ultra, ultra-tough test, probably tougher than my last fight to be honest.”

With the help of a great support system, his wife and three children, Brown has continued to evolve, not only as a fighter, as a husband, a father and a person. While Brown strikes us as a modern day warrior, and he certainly has those tendencies, he also has realized that fighting should be a part of your life, not all of it.

“I always look at it like a piece of your life. The UFC or fighting, it’s just a piece of your life. For you to progress as a person I think you should take lessons from everything you do in fighting and apply it towards your life. I think that’ll make you a better person, and I think, ultimately,  that where’s you’ll get a lot more gratification out of fighting, rather than searching for fame or money or…just trying to get laid. Have pure motivations and take the lessons…then it doesn’t really matter how far you get, doesn’t matter if you win or lose. You’re still getting some positivity out of this.”