Matt Brown proved age is only a number UFC on ESPN 25 this Saturday, June 19.

The 40-year-old welterweight knocked out Dhiego Lima with a right hand in round two inside the UFC Apex in Las Vegas, Nevada. Lima chewed up the lead leg of Brown in the first round with leg kicks, but Brown took matters into his own hands.

A marquee matchup in the featherweight division headlines UFC on ESPN 25 this Saturday, June 19.

Kicking off the main card is a welterweight affair between Matt Brown and Dehiego Lima. Brown, a 28-time UFC veteran, is coming off back-to-back losses. He most recently suffered a unanimous decision defeat to Carlos Condit at UFC on ABC 1 back in January.

He dropped a second-round TKO loss to Miguel Baeza previously at UFC on ESPN 8 in May 2020. The defeat came after he picked up two-consecutive wins over Ben Saunders and Diego Sanchez.

Lima is looking to re-enter the win column as well. he most recently dropped a unanimous decision defeat to Belal Muhammad at UFC 258 last February. He previously won three-straight bouts against Luke Jumeau, Court McGee and Chad Laprise.

Here is how the welterweight bout between Matt Brown and Dhiego Lima went down at UFC on ESPN 25, including round-by-round scoring. For full results of the event, check them out right here. 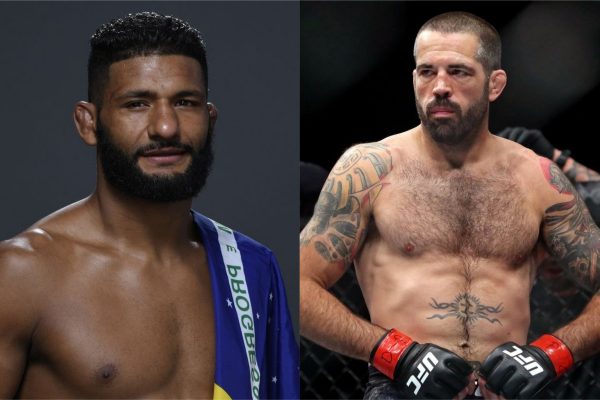 The two meet center. lima is side to side, Brown pressing forward early. Brown is center, catches a leg kick from Lima, but nothing happens. Brown lands a front kick. Brown lands a kick to the body. Lima finding leg kicks early. Brown lands an outside leg kick of his own. Lima lands another leg kick. Brown’s leg is showing redness. Brown is landing the leg kicks often as well. Brown goes to the head with a kick, but misses. Brown takes another leg kick and  bounces gingerly on it. Brown lands a leg kick. Lima misses with a leg kick there. Brown over commits on a right hand, end up behind Lima. The round ends with both men on their feet. Very technical round one.

MyMMANews scores it 10-9 for Lima

Lima throws the jab. Brown is lighter on his lead leg. Brown lands a front kick. Lima lands the front kick again. They clinch and Brown lands a knee to the body. Lima presses Brown against the fence. Lima tries for a takedown. Referee Herb Dean warns Brown about a fence grab. Brown circles out. Lima lands another leg kick. Lima shoots for another takedown. Brown able to defend and get free. Brown is beginning to fake his strikes. Lima closes distance and cliches Brown against the fence again. Brown lands a right cross and Lima face plants to the canvas. This one is over.