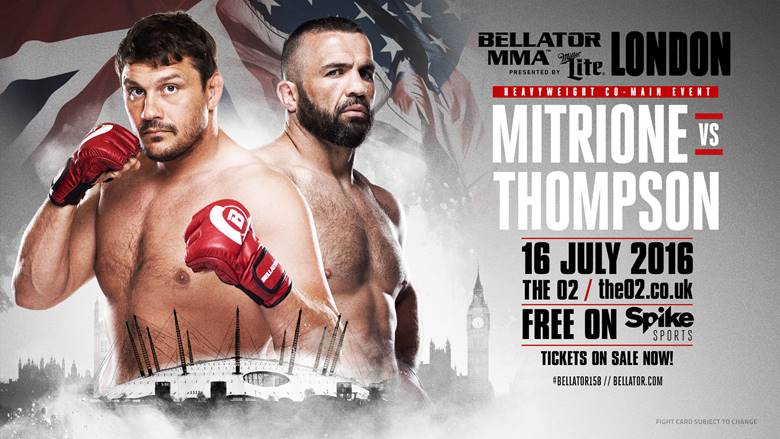 Fresh off his emphatic knockout victory over Carl Seumanutafa at “Bellator: Dynamite 2,” former NFL player Matt Mitrione (10-5) has cleared medical testing and will now face “Britain’s Strongest Man” winner Oli Thompson (17-8) during the main card of “Bellator 158: London,” which will take place on July 16 inside one of the world’s most popular venues, The O2 in London, England.

In addition, fans will also have the pleasure of watching the always-entertaining British sensation Paul Daley (38-13-2), as he prepares to put on a show for his hometown fans against Brazilian knockout specialist Douglas Lima (26-6). Michael “Venom” Page(10-0) aims to continue his raging pace and remain unbeaten when he challenges himself against MMA veteran “Cyborg” Santos (21-17), and Linton Vassell (16-5), who returns to action against Francis Carmont (24-11).

The 37-year-old Mitrione will enter the Bellator cage for the second time under a month, after knocking out Seumanutafa (10-6) in his promotional debut on June 24, in a journey that was brilliantly documented by Chuck Mindenhall.  A native of Indianapolis, “Meathead” joined the Bellator MMA team as one of the highest profile free agent acquisitions ever, carrying with him a talented athletic background that includes stints in the NFL with the New York Giants, San Francisco 49ers and Minnesota Vikings. Mitrione is a 14-time UFC veteran that is known for ending fights early and violently, with nine of his ten victories coming by way of knockout and six of them ending in the first round.

A resident of East Sussex, England, Thompson will be making his Bellator MMA debut after 25 career fights amongst the heavyweight division’s elite. “The Spartan,” who solidified himself as “Britain’s Strongest Man” in 2006, is looking to build off an impressive 2015 campaign, in which he emerged victorious in all five of his bouts, including two first round knockouts. Since making his professional debut in 2009, Thompson has fought under the direction of multiple regional promotions, and the UFC. At 36 years of age, he will undoubtedly make the most important appearance of his career when he takes center stage in front of thousands of hometown fans in the main event of “Bellator: London” on July 16.

By Mary Hartman 1 day ago