McGregor ready to give up UFC belt after Alvarez win, but ‘let me get the f—ing thing’ first

UFC 205 is set to be the biggest MMA event of all time and will break all records. It is the first time that the UFC will hold an event in New York since the ban has been lifted. Headlining the stacked card is the Notorious Conor McGregor who fights the current 155 lb., champion, Eddie Alvarez. McGregor has said that when he beats Alvarez he will be ready to give up one of the belts. Currently, the Irish superstar is the 145 lb.,  champ after beating Jose Aldo in just 13 seconds. 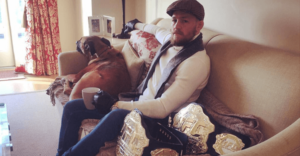 If McGregor manages to beat Alvarez at UFC 205 he will create UFC history as no other fighter has held two belts in different weight classes at the same time. MMA legends Randy Couture and BJ Penn both managed to win the belts in two different weight classes but not at the same time. If Conor manages to make his dream come true of becoming a two-weight champ he will elevate his status even further and become one of the world’s biggest stars. To find the best odds for the fight make sure to visit bestbettingwebsites.org.uk it will help you increase your winnings if you predict the correct result.

McGregor has not defended his 145 lb., belt since beating Jose Aldo and the featherweight division is in disarray due to this. Aldo beat Frankie Edgar to win the interim belt and was expecting a rematch against McGregor. This did not happen though and instead, McGregor chose to fight for the 155 lb., belt and not give Aldo a rematch. Aldo was not happy about this and is trying to get out of his contract with the UFC due to it. He feels that he has earned the right to try to win the belt back off McGregor.

McGregor is on his own mission to make his dream of becoming a two-weight class champion and it has led to many fighters in other divisions feeling let down. McGregor is not bothered by this as he is on his own mission to make history. It has been reported that after the fight at UFC 205 the Irishman is going to take time out of the game, so there will be a lot of fighters bitterly disappointed by this. He is the only star apart from Ronda Rousey who generates millions when they fight and all fighters are desperate to get their chance of a big slice of the pie.

In an interview with Sports Illustrated McGregor said that once he wins the belt from Alvarez he is willing to give up one of his titles. He was quoted in the magazine saying: “Let me go onto the side of that Octagon and raise two world titles, what’s never been done before, before talking about stripping me. Let me get the f—— things, let me do it”

McGregor is going to have to perform at his very best if he is to make his dream. Alvarez is a great fighter who has the ability to take Conor down to the ground. As we saw in the Chad Mendes fight this is the Irishman’s weak point and if Alvarez can take advantage of it, he could destroy McGregor’s dream.