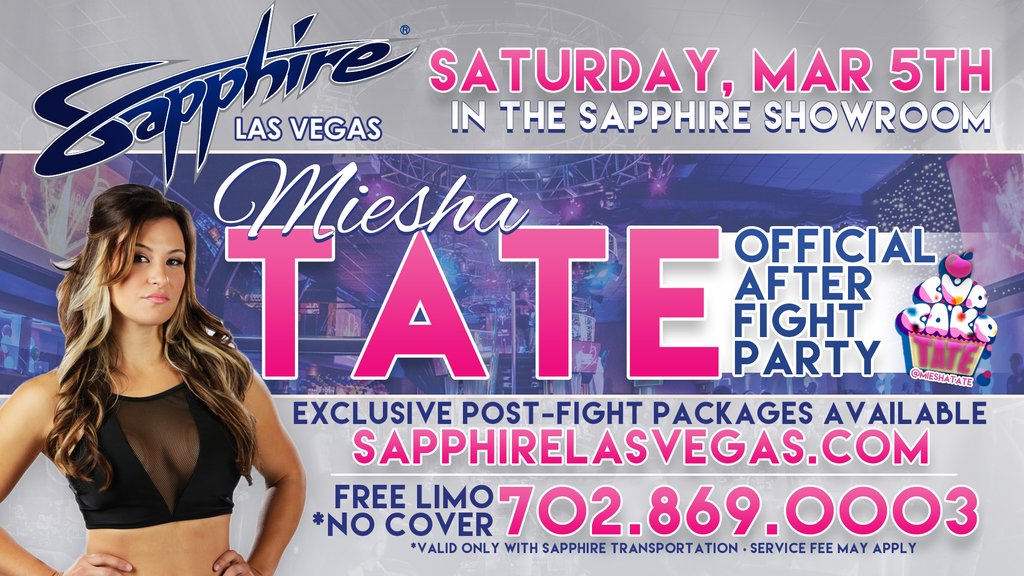 Sapphire Gentlemen’s Club, voted “Best Gentlemen’s Club” in Las Vegas for the past four years in a row by Las Vegas Review Journal in their annual reader poll, announced that special guest, UFC bantamweight Miesha “Cupcake” Tate will host a private UFC 196 After Fight Party in the Sapphire Showroom in Las Vegas on Saturday, March 5th following her fight with current UFC bantamweight champion Holly Holm which will be shown live at Sapphire in their fabulous viewing room. 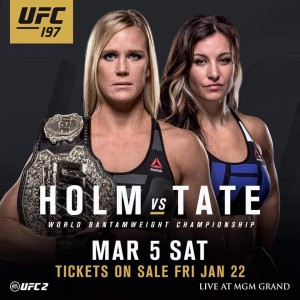 Miesha welcomes and invites all of her fans to join her in this championship celebration.

There will be a “meet and greet” for all those that attend the After Fight Party and a raffle will be held for a chance to win a pair of boxing gloves signed by Miesha Tate for those that show up early to watch the fight live at Sapphire.

Commonly referred to as “Cupcake” and “Takedown,” Miesha Tate is a celebrated mixed martial artist with accomplishments and accolades including: Strikeforce Bantamweight Champion, Freestyle Cage Fighting Champion, 2011 Female Fighter of the Year, and more. Tate is known for her extensive knowledge of ground-based arts including wrestling, jiu-jitsu, and submission defense. In 2011 Tate won the Strikeforce Bantamweight Championship by becoming the first woman to ever submit Marloes Coenen in an MMA bout. In UFC 183, Tate out-grappled Olympic wrestling medalist Sara McMann for the win.

Watch the fight unfold on one of three mammoth 12-foot screens featuring live digital sound. There will be food and drink specials, raffles and prizes. Best of all…dollar dances from no less than 100 beautiful Sapphire entertainers. Pick a favorite and retreat to one of 10 private skyboxes overlooking the main floor for a more “intimate” view of the UFC action.

These events will sell out fast so make reservations today. For more information about Sapphire, or to book your reservation, call (702) 869-0003. Sapphire is open 24/7 to patrons 21 and over, Sapphire serves the finest variety of cocktails, wines, champagne and cigars.