Chris Wade stole the show Thursday night at PFL 5 on Long Island as he continues to find success at the NYCB Live – Nassau Coliseum. Fighting in the featured fight of the undercard, Wade entered the bout on the PFL (Professional Fighters League) playoff bubble facing a must-win situation. Japanese fighter, Yuki Kawana with his back also against the wall, naturally created a spark to a fight that will now be talked about for months to come. Wade and Kawana fought on Facebook Watch, live and for free.

The moment Chris Wade started the walk to the PFL cage the crowd erupted for the Long Island native. As the only Long Island MMA fighter to compete inside the Nassau Coliseum twice, the Islip High School graduate tossed a spark into the crowd with his flying high kick to start the fight against Kawana.

Making mention of his flying high kick on Tuesday at the media workouts, Wade and his Long Island MMA team noticed in Kawana’s last fight he came rushing across the cage seeking a takedown. As Kawana came running across the cage Thursday night at PFL 5, Wade met him in the center of the cage with a flying high kick that landed about two inches to the right side of Kawana’s head, grazing his shoulder and knocking him to the canvas.

“I told my corner and I told my brothers, I was coming straight across the cage with a flying kick to his head,” Wade said to Bas Rutten inside the cage during the post-fight interview. “I saw him do it in his last fight, so I knew he was going to give me what I wanted.”

The former All-American wrestler pounced on Kawana delivering a series of strikes to the Japanese fighter’s head while sprawling to defend Kawana’s recovering takedown attempt. Wade immediately locked up a D’Arce choke submission attempt as he tried to finish the Y&K MMA Academy fighter.

Kawana managed to escape the grip of the hometown fighter scrambling into a better position. The Y&K MMA Academy fighter locked a body grip around the Long Island MMA fighter and slung Wade back to the canvas after they came to their feet for a brief moment against the cage. As they come back to their feet once more, Kawana left his head on the hip of Wade while attempting a takedown and the American wrestler took full advantage putting his arm around the head of Kawana and sinking in a finishing Guillotine choke.

Chris Wade defeated Yukie Kawana in round one at 4:24 by way of submission via Guillotine Choke. In the process, Wade earned six bonus points in the PFL standings, leaping him into the number four seed at the start of the PFL playoffs.

Sitting at the number four seed, the top three is rounded out with Natan Schulte in first place with nine points. He earned three points for his first regular-season win over Chris Wade in a unanimous decision and six for his first round submission victory at PFL 5 Thursday night.

Will Brooks and Islam Mamedov, are the No. 2 and No. 3 seeds heading into the playoffs. Brooks earned two regular-season unanimous decision victories earning him six points, three for each win. Mamedov won a unanimous decision verse Kawana at PFL 2 in Chicago and a walkover win when Efrain Escudero didn’t make weight for a second time ahead of PFL 5. The two earned wins inside the cage give Brooks the node for the No. 2 seed.

Wade earned the fourth seed scoring six bonus points with his first round finish at PFL 5 but has a 1-1 record in the regular season, which is why he finds himself behind Brooks and Mamedov, whom both have six points as well.

Yuki Kawana, Efrain Escudero, and Arthur Estrazulas have been eliminated from the PFL playoffs.

Wade’s next opponent has not been announced. If PFL matches up the fighters in a traditional playoff, with the highest seed competing against the lowest seed, No. 4 seed Chris wade could end up battling No. 5 seed Robert Watley in the quarterfinals of the PFL playoffs.

Watley fell to Will Brooks on the main card at PFL 5 via unanimous decision. His sole PFL win came against Thiago Tavares at PFL 2 via second-round TKO (Leg Kick). Watley fell to 11-2 in his career, while Wade improved to 13-4 in his MMA career. A potential matchup between Watley and Wade in the playoffs has Fight of the Night written all over it. 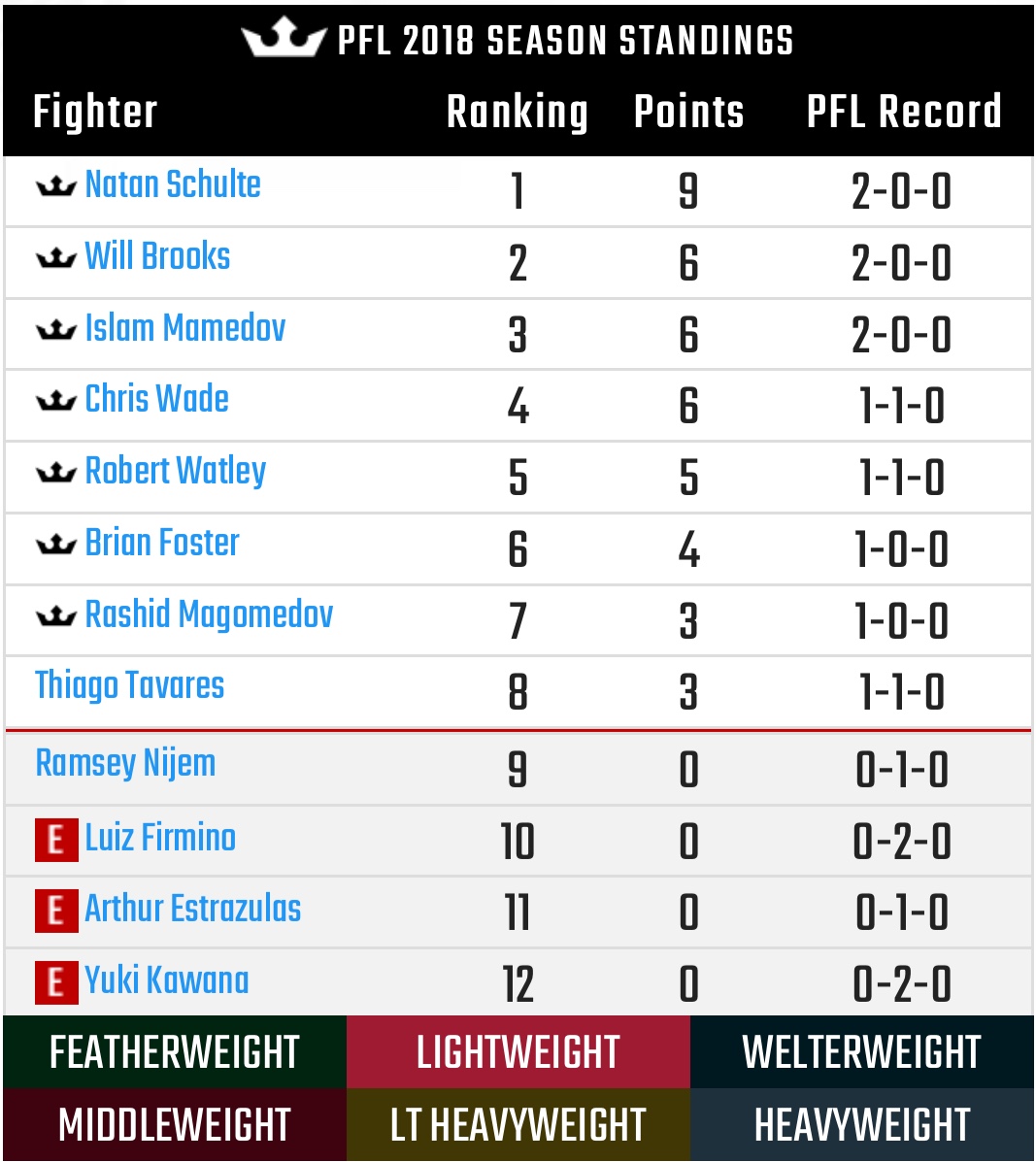 Chris Wade PFL 5 Post-Fight Media Scrum. This video is sponsored by Pure Spectrum CBD. Be sure to use our code ‘CCMMA’ for 10% OFF ALL products at Purespectrumcbd.com. https://www.purespectrumcbd.com/?ref=111 August 2, 2018.