Sean Wheelock, the famed voice of Bellator MMA before his release earlier this year, will take the job of Tony Luftman at Titan FC 36 this December. 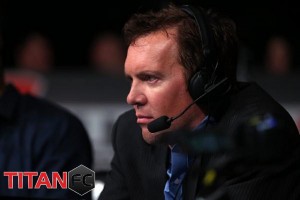 Titan FC CEO, Jeff Aronson tells MyMMANews.com, “Super excited to have Sean join the Titan FC family… Kansas will be a great feeling out process and if all goes well I look forward to Sean being a permanent fixture in the booth.”

The event takes place December 18, in Kansas City, Missouri and streams on UFC Fight Pass as part of the organization’s streaming deal with the UFC’s digital network.

Wheelock has a laundry list of experience, serving as a commentator for M-1 Challenge, Affliction MMA, TNA Impact Wrestling, and most notably the play-by-play television commentator for Bellator MMA for five years.

He holds the distinction of being the only person to serve as a play-by-play commentator for the FIFA World Cup, the Super Bowl (three times for the BBC), U.S. Open tennis, and world championship fights in mixed martial arts.

He also co-wrote “Is This Legal?: The Inside Story of The First UFC From the Man Who Created It” with UFC creator Art Davie.

Additionally, Wheelock has worked as a professional boxing referee since he was 24 years old, and still holds an active license through the Kansas Athletic Commission.

Wheelock also hosts a podcast with referee, Big John McCarthy, called ‘Let’s Get it On!’

By Brady Briggs 58 mins ago