Last weekend at UFC 251, Max ‘Blessed’ Holloway once again met Alexander ‘The Great’ Volkanovski in the five round co-main event for the UFC Featherweight Championship. As we all know, Volkanovski won their first encounter quite handily, but this second fight was much, much different. Most people believe Holloway won this time around, and much of the MMA community isn’t happy with the decision. It’s unfortunate when fights end this way, especially world title fights, because the man most believe is the champion doesn’t have the belt. 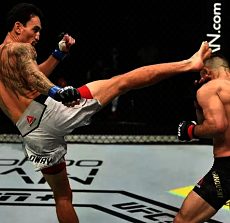 It was hard to imagine Holloway could make those adjustments in just half a year, but he did. The biggest problem he faced in their first match up was Volkanovski’s leg kicks, which appeared to have an effect, given the fact that Holloway started switching stances midway through that fight. The adjustment he made wasn’t to check those kicks though, it was to return a kick of his own, and it was working great for him. Holloway just couldn’t get going in their first fight, but he was really piecing Volkanovski up this time around.

‘Blessed’ was throwing a wide variety of strikes right from the start. He stunned ‘The Great’ with a one-two combo in the middle of round one, before throwing and landing a beautiful spinning back kick toward the end of the round. Right after landing the spinning back kick, Holloway timed a beautiful head kick that dropped Volkanovski, but the round ended just seconds later. Round two was much of the same, Holloway was looking as good as he ever had, and he finished that round by dropping Volkanovski with an uppercut, just one of many he landed at UFC 251. He wasn’t just landing single shots either, he was landing beautiful combinations throughout the opening rounds. 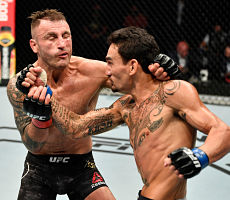 Two rounds down and it was really looking like we were going to crown a new featherweight champion. If it were a three round fight, he would’ve had it, but of course it wasn’t, it’s a world title fight. Round three showed a lot of the same as well, though Holloway didn’t stun or drop Volkanovski in this one. He still pressed the action and out-struck him in round three, but all three judges gave Volkanovski that round, to our surprise. Everyone believes this should’ve been the deciding round. The fourth and fifth rounds were much different however, as ‘The Great’ pulled it together and won the last two.

Volkanovski was able to press the action and secure three takedowns in the final two rounds, something he was unable to do in four attempts in his first fight with Holloway. He wasn’t able to keep him down, but he achieved his goal. As we all know, the deciding factor in their first fight was leg kicks, where the ‘The Great’ landed 75 of them. This time around he landed 67, that’s pretty insane, even in a five round fight. However, it shouldn’t have been enough this time, Holloway did so much more in this fight than he did in their first, and he did more in the first two rounds than Volkanovski did in the last two. However, Holloway may be to blame for this split decision defeat.

The weirdest thing about this fight, Holloway always presses the action more and more as his fights go on. Just look at his fights with Jose Aldo both times, Anthony Pettis, Brian Ortega, Dustin Poirier the second time, Ricardo Lamas, Cub Swanson, and many more. Every one of those fights saw him pick up the pace until the fight was over, whether it ended in a finish or the rounds came to an end. It’s not just minute by minute either, Holloway usually fights with a higher intensity round after round, and the more he lands as he’s picking up the pace, the more he throws. That didn’t happen last weekend, he kind of fell off in the later rounds, it’s not something we’re used to seeing from him. 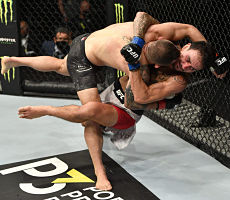 It’s a real wonder why he did that. Did he feel he did enough in the first three rounds? Doubtful, because that’s not the fighter he is. Did he get tired after the third round? That’s also doubtful, he never gets tired, he’s got some of the best endurance in the entire sport. So that leaves us with one more possibility, Volkanovski made the correct mid-fight adjustments. That’s most likely what happened, but still, Holloway didn’t fight rounds four and five like he did in one, two, or three. He didn’t throw as much, it was super strange to see. Nonetheless, Volkanovski deserves a lot more respect that he’s been given.

The scorecards ultimately took the fight from Holloway, as one judge scored it 48-47 for him, and the other two had it 48-47 for Volkanovski. This brings us to the question, what’s next for Max Holloway? Some people say an immediate rematch, but that’s what this fight was, an immediate rematch, and for both fighters. Neither had a fight since their first one. Not to mention, it’s incredibly hard to get a trilogy fight when you’re 0-2 against that fighter, especially when they’re the champion.  145 lbs is stacked right now. We’ve got Brian Ortega, Calvin Kattar, Chan Sung Jung, Zabit Magomedsharipov, Yair Rodriguez, Josh Emmett, not to mention all the up-and-coming killers that’re working their way up the rankings.

‘Blessed’ has always been a prodigy, ever since we saw him for the first time at 20-years-old. He stunned Dustin Poirier and was looking great on his feet in his UFC debut. He’s grown and evolved so much since then, right in front of our eyes. But after starting out his career with a 20-3 record, being on a 13-fight win streak, winning the interim, then undisputed UFC Featherweight Championship and defending it three times, he’s now 21-6, going 1-3 in his last four. He’s 28-years-old, which means he’s just now entering his physical peak. That’s not at all how you want to start your prime years as a fighter.

Many of us believed he’s a natural lightweight, and that he should move up, until his rematch with Poirier that is. We saw, he’s really not as big as we thought. He is a big featherweight, but it’s not hard for him to make weight, and he’s just simply outsized at 155 lbs. Now, if he were to put on some weight and make the move up, not just take a single fight, he may look more like a natural lightweight.

We saw that from the man to defeat him at lightweight; Poirier wasn’t as big when he initially moved up as he is now, so that could be a possibility, because most of the top featherweights are booked. The only one that isn’t is Kattar, and he’s had his nose broken twice in two months, he needs some time off to recover. After him is Emmett, who’s going to be out a while with his knee injuries, then there’s Jeremy Stephens, who Holloway already beat, then Dan Ige, who’s coming off a loss, then Arnold Allen, who while he’s 7-0 in the UFC, it’s doubtful the UFC will give him anyone outside of the top ten. Whatever is next for Holloway is going to be big, but it’s near impossible to say right now what that will be.

What’s next for Max ‘Blessed’ Holloway?

Jack Dempsey and Muhammad Ali: How the heavyweight title has attracted legal disaster throughout history

By Alex Behunin 3 weeks ago

Is Josh Emmett getting passed up for a UFC featherweight title shot?